First time gardener looking for a critique of my 2020 plan and answers to a several questions that came up in the process!

It's that time of the year again where I plan to start a garden, but never get around it and say "next year, for sure!" Except this time, I want to actually follow through with it. I don't like starting small and try to be as analytical as possible with any project I start, so bear with me as I lay out my findings/conclusions below:

For starters, I am in zone 6A.

My house is in the middle of the woods, therefore limited sunlight. The whole property is positioned East to West, and although I initially thought I would not be able to grow anything interesting - I believe I have found two areas of my backyard which have sufficient amount of sun. The last time I was "planning my garden" was last May and on May 22, 2019 I made an effort to go out into the backyard and take photos every hour. Unfortunately I woke up late that day so only started at 10am, however, the areas lit up by sun around 10am are lit up roughly starting 8-9am. I put together a little animation which you can see below. The red and blue areas is where I plan on planting the garden - these areas get roughly 5-6 hours of full late morning/afternoon sun and a couple more hours of dappled sun in the morning and evening hours. I spoke with a few gardeners and they claim this is sufficient to grow things like tomatoes, cucumbers, strawberries, etc. Any thoughts on this?

I'm in the Poconos in PA, and my soil is mostly rocky clay. For this and aesthetic reasons I plan on putting together a couple raised beds and a greenhouse and having a truckload of high quality topsoil delivered. In the red area, I plan on putting 2x 4'x8' raised beds with deer/squirrel netting similar to this: https://i.pinimg.com/originals/f4/d5/28/f4d528a1e2cde5ac3efd210c52d80892.jpg (there are deer, squirrels and other wildlife roaming free all around here). In the blue area I plan on putting a 6'x8' greenhouse from harbor freight and another 4'x10ish' raised bed.

I came up with a list of about 25 different fruits, vegetables and herbs that I'd like to grow which I then whittled down to about 20 based on difficulty to grow vs how much I actually like said items. My list below (in alphabetical order):

After trying to figure out how many of each, spacing, etc. I stumbled upon The Old Farmers Almanac Garden Planner which made my laying out a breeze. Using their software, this is what I came up with. 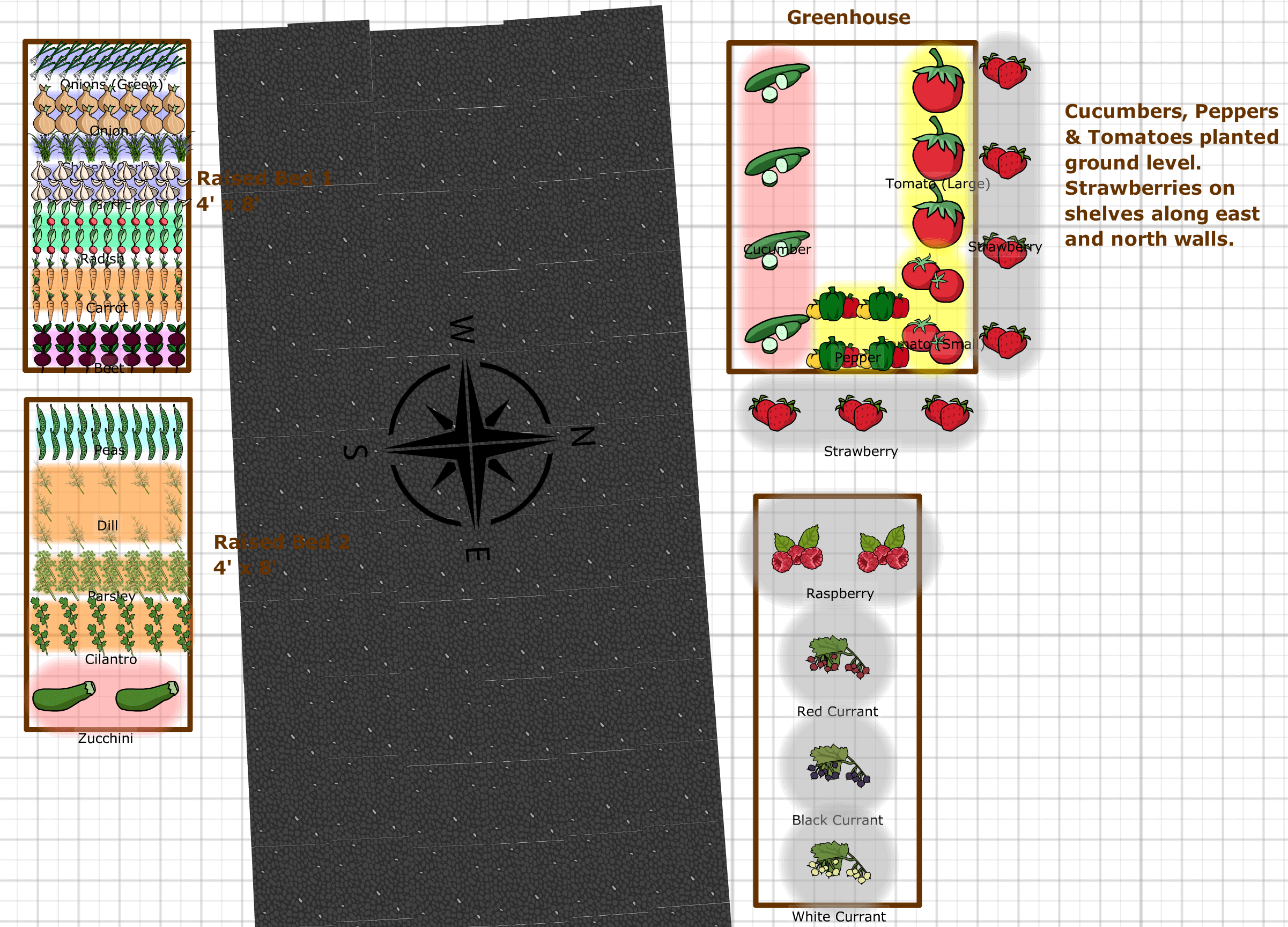 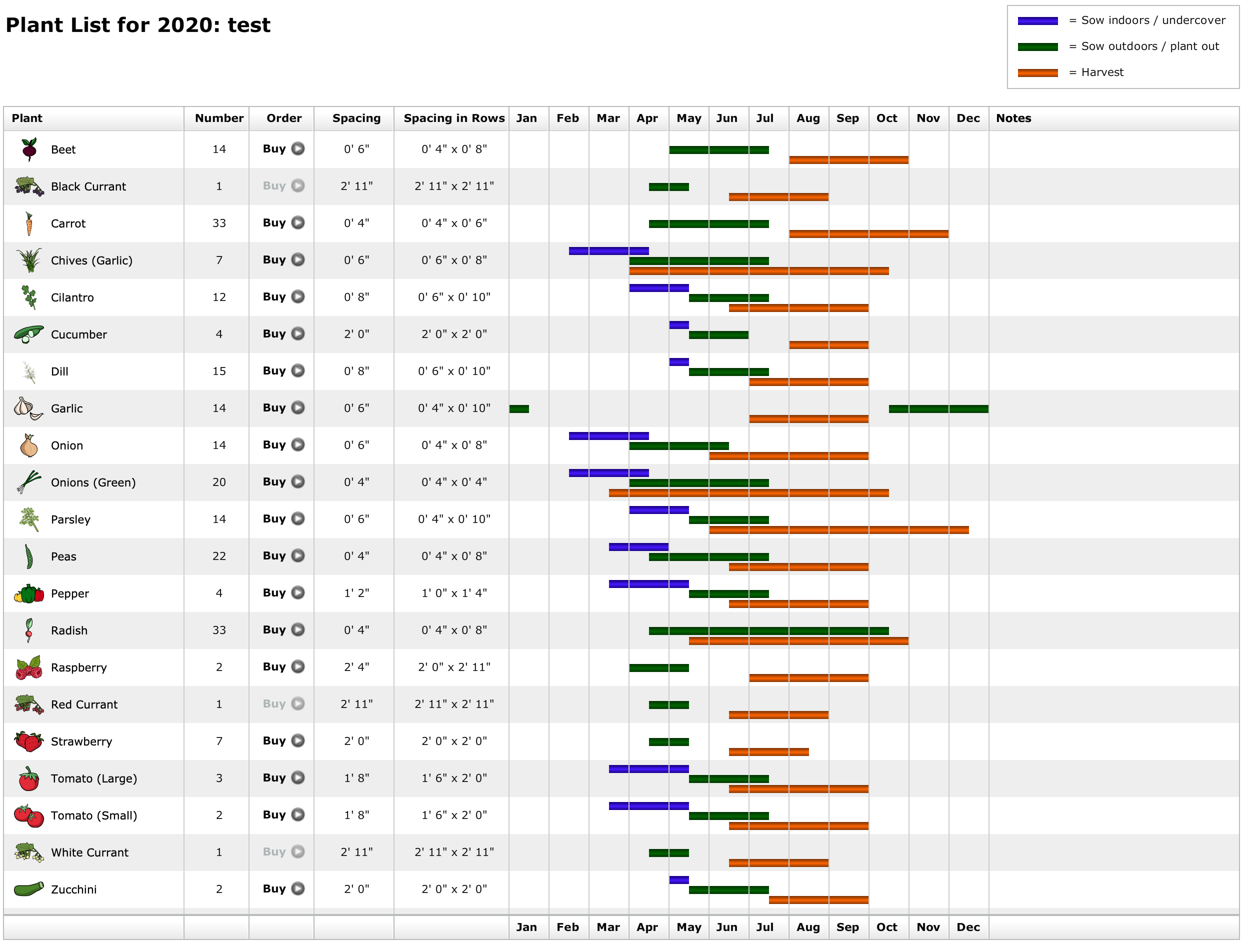 Based on these results I have several questions:

1. Has anyone used this and how accurate it is spacing wise? For example - Can I realistically only fit 5 tomato plants along 1 of the walls of an 8 foot long greenhouse? Is there actually enough space to fit 33 carrots plants as the software suggests?

2. What kind of yield can I expect from 7 plants of chives, 2 plants of zucchinis, 4 pepper plants - is it even worth the trouble for such a small number of plants?

4. Not related to the software, but am I missing something or something you would get rid of or replace with something else? (Obviously each person has their preferences on what to eat, but just open to hearing ideas!)

This is a vacation house and I'm only there about once a week, so my plan is to have a 50 gallon drum filled with water connected to a timer and drip irrigation system. I would hook it up to a house bib, however, I am on a well and don't trust those timers shutting off every time - would hate to blow out my well pump. The idea is I would fill up the drum whenever I'm around and have the timer do the watering however often I set it. Has anyone tried doing a gravity fed drip irrigation system? I also considered having a solar powered setup which would charge a car battery, connected to a timer, connected to a pump which would pump the water from the drum through the system. Any thoughts/ideas/suggestions on this point would also be appreciated.

I think that's it for now. Thank you in advance for any input!

Wow, Where to start? I guess with a critique of the plan...

For the gravity drip system, use a battery timer that has a rotating ball valve inside. That sort doesn't need pressure to operate. If you can find a friend to work with that will help with motivation. Good luck!

Not the answer you're looking for? Browse other questions tagged vegetables raised-beds root-vegetables greenhouse layout-planning or ask your own question.

3
Improving heat retention and light availability of coldframes
6
Morning/Afternoon sun plants (vegetables)
9
London garden lawn and tree positioning
5
Greenhouse positioning
0
How to minimize rot when building raised bed from sleepers?
0
Raised beds vs containers in greenhouse?
1
Watering raised bed in southern California
2
What fruit or veg can I grow in an 8'x6' greenhouse in NW England?