What to do to pelargoniums after overwintering in cellar

I have a couple of pelargonia in pots. They live on a south facing balcony, and generally seem pretty happy there in the summer. (In my previous posts, they lived elsewhere and were much less happy. On this balcony they generally got a lot less etiolated.) I put them in a cellar overwinter (probably around early November? I forget), to protect them from the frost, and have just taken them back out, and watered them for the first time in 4 months.

You can see them below.

Question 1: Is this about the right time to have brought them out?

As you can see, they've reacted to being in the dark for ~4 months by growing a bunch of chlorophyll-free etiolated "stems". Which is roughly what I was expecting.

Question2: What should I do with them now?

I'm expecting to leave all the old growth (though to take off all the dead leaves and any dead flower heads). Is that correct? Or should I be pruning it down? If so, when? Prune it now, whilst it appears 'dead', or wait for it to start showing buds and good stems, and then do it. 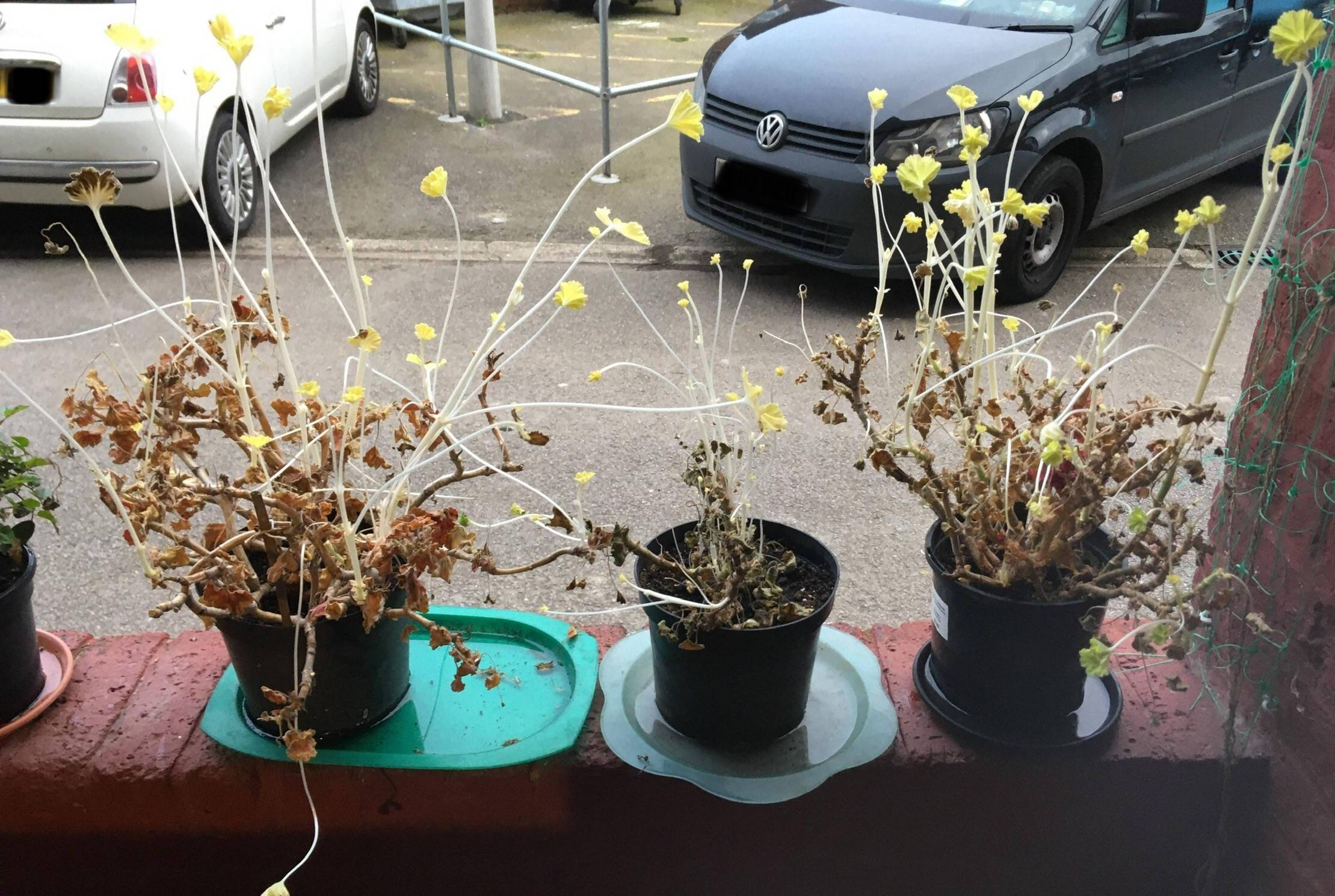 Prune them right back (all stems) down to about 1-2 inches, and remove any stems which have signs of mould or rot completely, and remove any dead leaves left, plus any sitting on the soil. Turn them out of their pots, shake or take off as much soil as possible without causing too much root damage and repot into fresh potting soil, water. Keep them inside in the brightest daylight/sunlight position possible until temperatures outdoors are around 19/20 deg C during the day, and not lower than about 9 or 10 degrees at night, which is usually May in the UK, although in London, it could be earlier (mid April), depending on weather condtions. Once growth begins, start fertilizing (something like Miracle Gro general purpose added to the water) once a week. You will need to harden them off prior to moving them outside for the summer months.

One other thing - do not let the bottom of the pots sit in water, empty those trays 30 minutes after watering.

Not the answer you're looking for? Browse other questions tagged houseplants pruning overwintering or ask your own question.

13
Should I remove the small leaves growing out of the bottom of my pepper plants?
6
Should I prune Rudbeckia for winter?
8
Overwintering pepper plants
5
Why are all my houseplants "leggy"?
3
What to do (after two weeks) with a waterlogged pot plant?
2
How to approach liquidambar with respect to pruning?
1
Overwintering green-leaved potted strawberry plants
0
How do I preserve a rose bush over the winter?