I've been growing a couple of avocado trees from pits and one of them is really struggling. 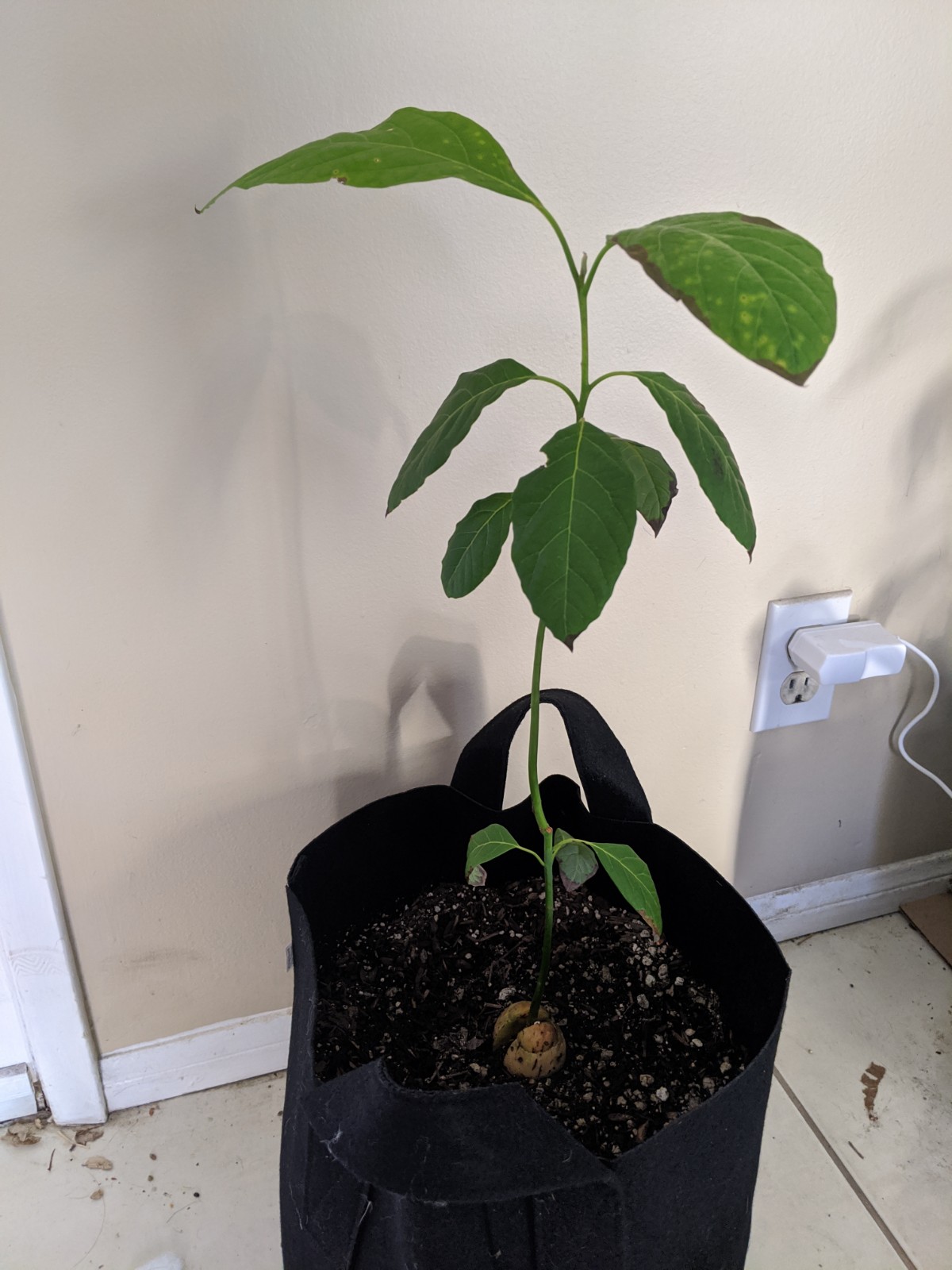 It got a spider mite infestation, which I seem to have controlled by washing the leaves with a very dilute dish soap mixture every few days for a couple weeks. Since then, the leaves developed slight browning on the tips, which I wasn't concerned about, but now the browning is spreading to the leaf edges.

Some of the browning has very clearly defined edges, similar to the brown tips: 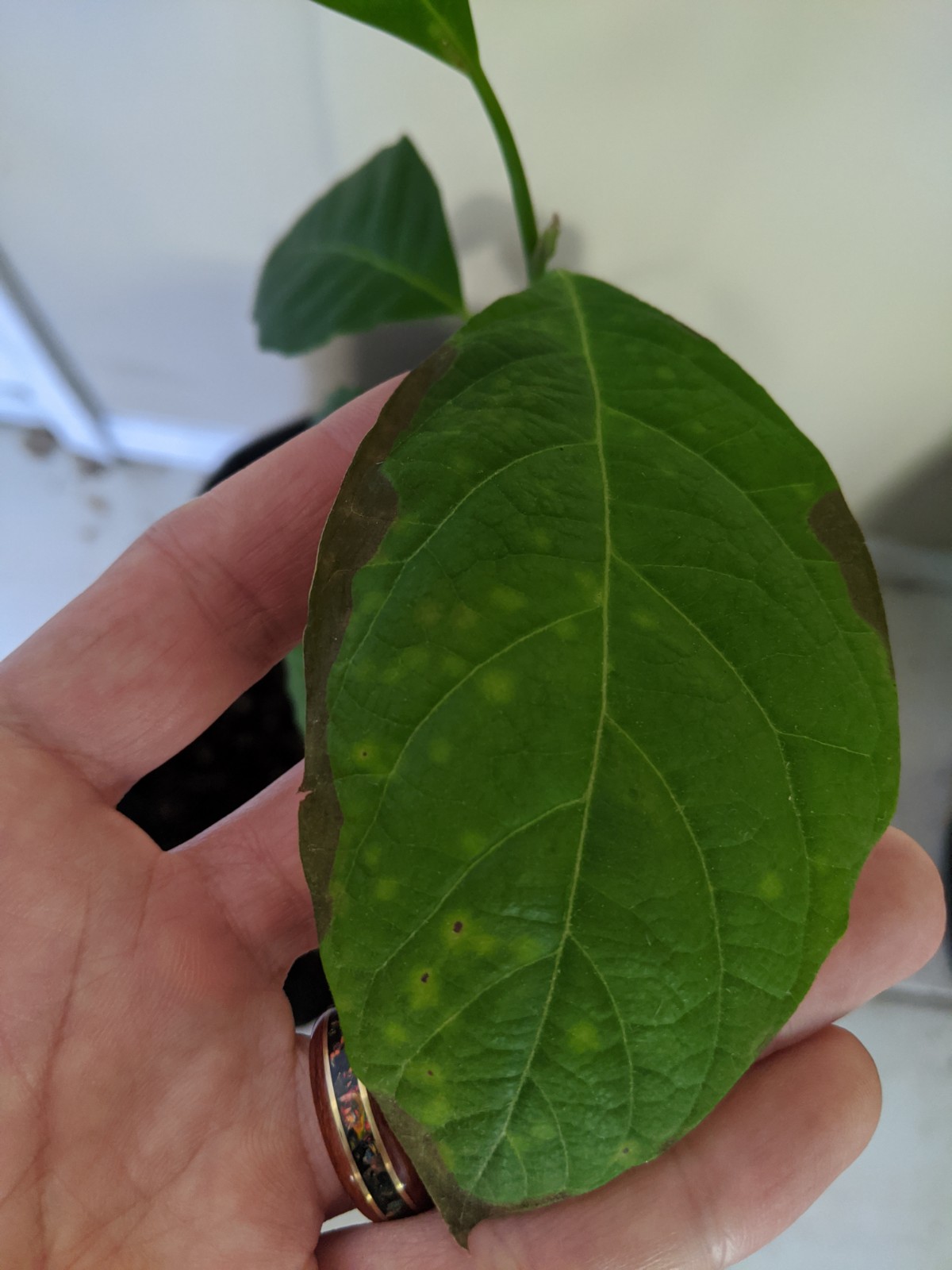 Another leaf has very indistinct edges to the brown spots, which makes me think it might be a different thing causing it? 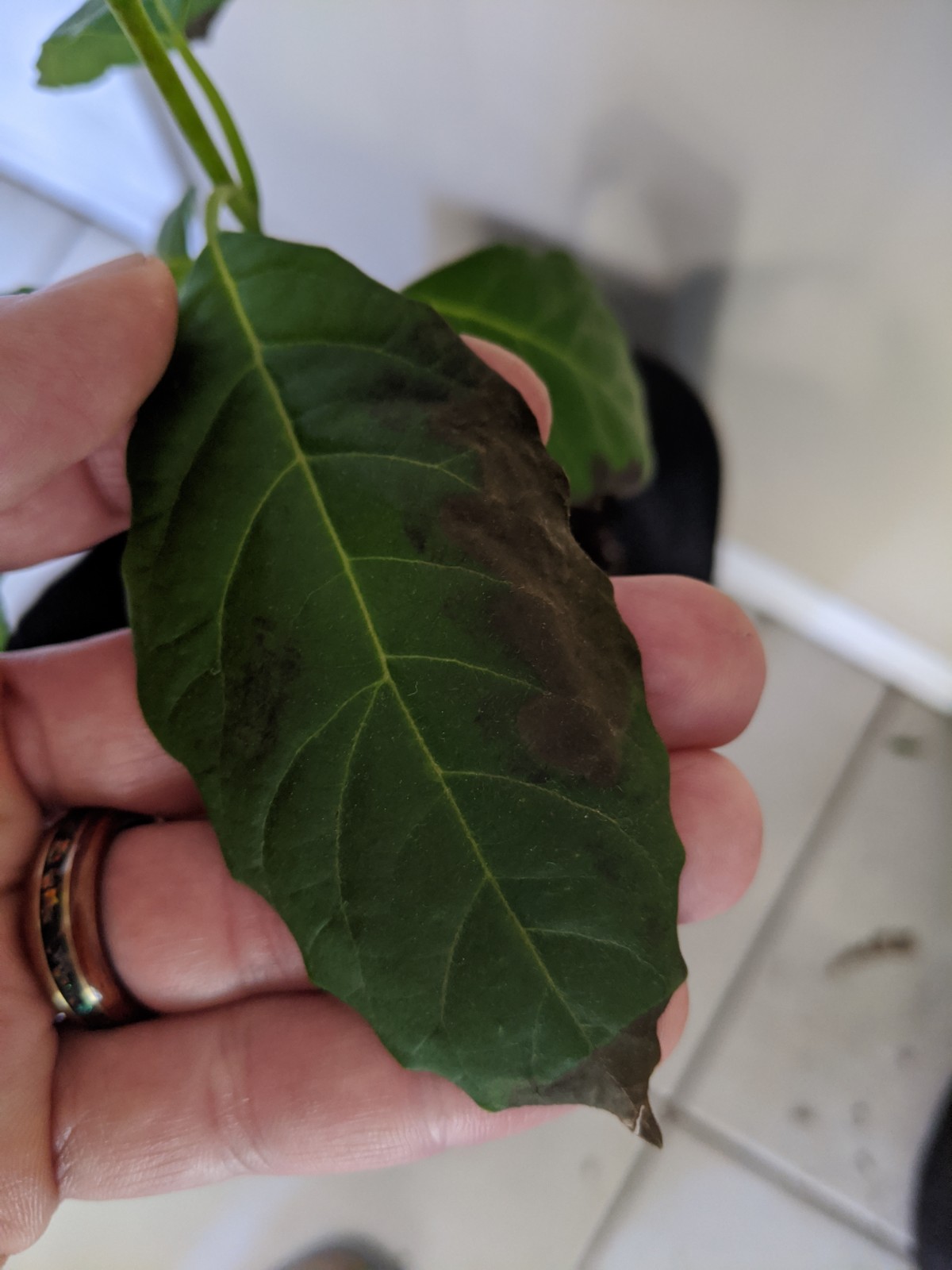 The tip of the growth bud has also shown browning and, I realized this morning, the very tip of it has broken off. It has been a while since this plant has had any real growth. 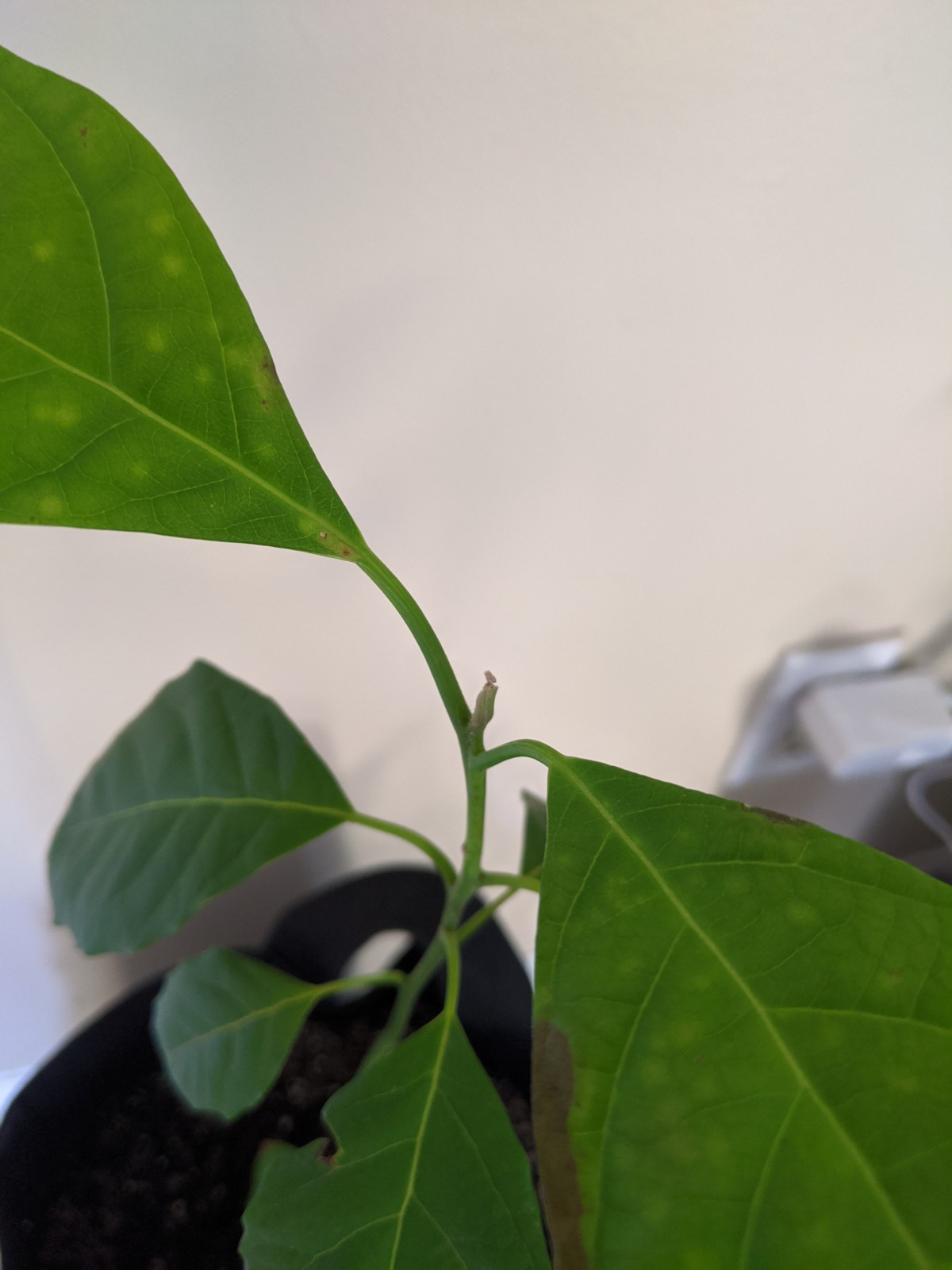 I'm in Los Angeles and this plant mostly lives indoors in a very sunny room. It doesn't get direct sunlight, but it does have a grow light. It is potted in a cloth pot with well-draining succulent soil. I water it when the top inch or so of soil gets dry to the touch (usually every 1-2 weeks). I'll totally drench the soil until it is running out everywhere.

I have two other avocados that have received identical treatment and show none of these problems. The one on the left got a bit sunburned when it was younger, thus the scorched leaf you can see. After this, and a fourth tree getting eaten by a squirrel, I moved them inside. 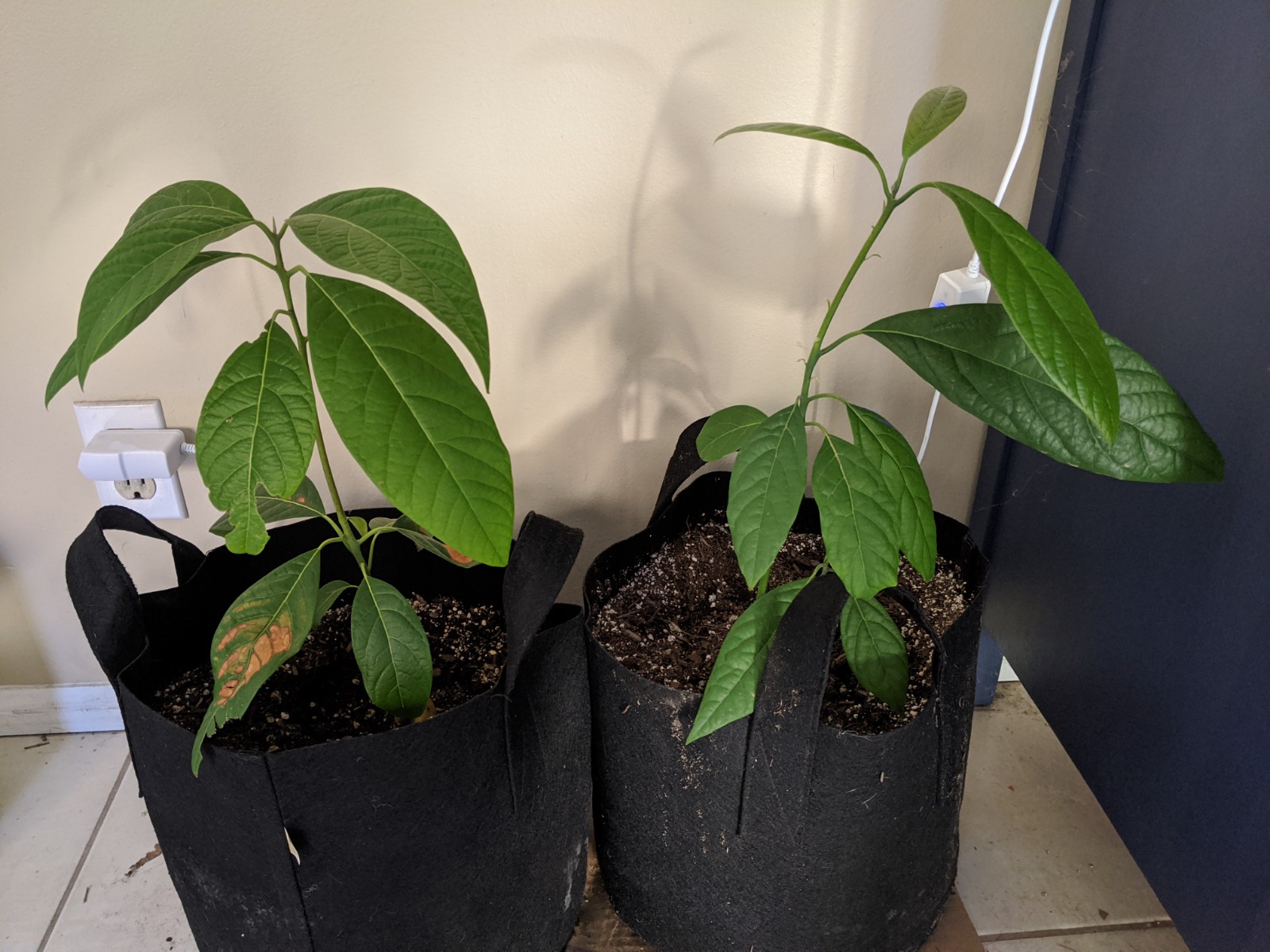 Is there anything I can do to save the struggling plant?

Firstly, there is one important comment that is not meant to be glib nor to frustrate you but it’s a simple reality. Just like people and animals, plants are individuals. It doesn’t matter how scientific you are, that you provided the same conditions in the same way. This is more true for plants raised by seed than by cuttings but not always. Professional growers expect to lose a percentage of their crop ant they do it for a job every day.

I’ll make the same comment that I recently made to someone else. Selecting the right pot size is important when raising germinating and raising seedlings and saplings. It’s important to start with as small a pot as your seed will comfortably fit in, so that the resultant roots have the chance to fill potting soil without becoming pot bound. This helps to reduce the water saturation levels in the mix, while increasing the amount of air around the roots (Air Filled Porosity). This is important because terrestrial plants can only take water into the roots if they have sufficient oxygen around the roots at the same time.

In spite of you attempting to manage this issue by using succulent potting mix, the kind of damage to the leave in your photo is characteristic of a plant that has sat wet at some point. This does not mean that it is continuing to sit wet but that at the time that the damage occurred, the plant roots were saturated and the plant couldn’t take up water. This resulted in cells within one leaf collapsing.

I suspect that the holes in your grow bags are at the bottom and when they sit on concrete or tiles, the bag doesn’t drain properly. Try lifting them onto wire stands, wooden slats or anything that will improve the drainage from the bag. Two weeks is also a long time between drinks.

You really need to find a way to ensure that the plants get sunlight during the day, even if it you need to harden them off gradually outside. Give them an east facing position so that they get the softer morning sunshine and gradually introduce them to a more open all day sun position. Think creatively about how you can protect them from animal attack with rigid netting or a cage of old window fly screens.

Lastly, have a link about plant nutrition. They have used all the food reserves in the seeds and the cactus/succulent mix will be pretty nutrient deficient. Some slow release fertiliser worked into the top inch of potting mix would help. Or apply a liquid fertiliser once a week. You should also consider using a liquid seaweed preparation to promote root growth to fill those grow bags.

I would certainly leave them in the bags until the roots fill out the mix without becoming potbound. Keep an eye on the drainage holes for signs of roots as well as the sides of the bags.

The leaves can stay on. They are stil photosynthesising to produce sugars and some of those sugars will be used in growing new roots.

You should certainly water with liquid seaweed solution to promote root growth. If your area gets frost, put the plants under cover over night or leave them inside but near a window that gets morning sun. At this young stage, one frost could be the end of them. Cheerio

Not the answer you're looking for? Browse other questions tagged plant-health avocado or ask your own question.

10
Why are the leaves on my mango tree turning brown and drying out?
4
Young avocado plant has brown spots spreading on leaves
2
Ginkgo Biloba Bonsai leaves turning brown from middle
3
What’s wrong with my Dracaena Marginata?
1
Avocado leaves dying: is it the fungus or the fungicide?
3
Avocado leaves have various type of browning and dying young leaves
0
Brown around edge of Avocado leaf
5
Why does my basil have brown edges, yellowy spots, and split ends?