I have a Brook Cherry sapling planted from seed that has some browning/curling around one of its bottom-most leaves (leaf #1) and slight curling of its other bottom most leaf (leaf #2). The seed came from a Cherry Orchard outing where I proposed to my Fiance (she said yes :), so the seedling has very special significance for us and I'd really appreciate some advice about it.

I first noticed the tip of leaf #1 turning brown about a week ago. At the time, the tip of the leaf was quite close to the soil -- so close that I believe it may have been touching the soil at some point recently. When I noticed this, I removed some of the topsoil to give the bottom-most leaves more distance from the soil. About a week has passed since then, and the browning seems to be getting worse, progressing along the edges of the leaf. I've also noticed the the other bottom most leaf has started curling recently as well. I've included several pics below.

Some history: The seed had stratified in our refrigerator, and about 30-40 days back, I noticed it had sprouted, so I potted the seedling using some Miracle Gro potting soil I still had in a bag, planting it about 1.5 inches deep. Full disclosure -- the potting soil was many years old, but was still unused from the bag, and hadn't been used to grow anything else.

As well as watering every few days, I had also been occasionally spraying the leaves of the sapling with a water bottle every day or two. I stopped that when I noticed the brown tip, concerned that maybe it was causing it. I always use distilled water for watering and spraying because our tap water is very very hard. Until yesterday, I also keep it under an LED grow light for 12 hours a day. I've since lowered the brightness of the light and moved the light source further from the sapling, just in case that was a problem.

Also: I live in Southern California and have been growing this indoors.

Any advice? Should I prune this leaf, and if so, where and how do I make the cut? Or was using old soil my mistake, and if so should I repot in a different medium like peet moss? leaf #1 is a bit less than an inch from the soil now, should I remove even more topsoil to give it more space? Or something else? Thanks :) 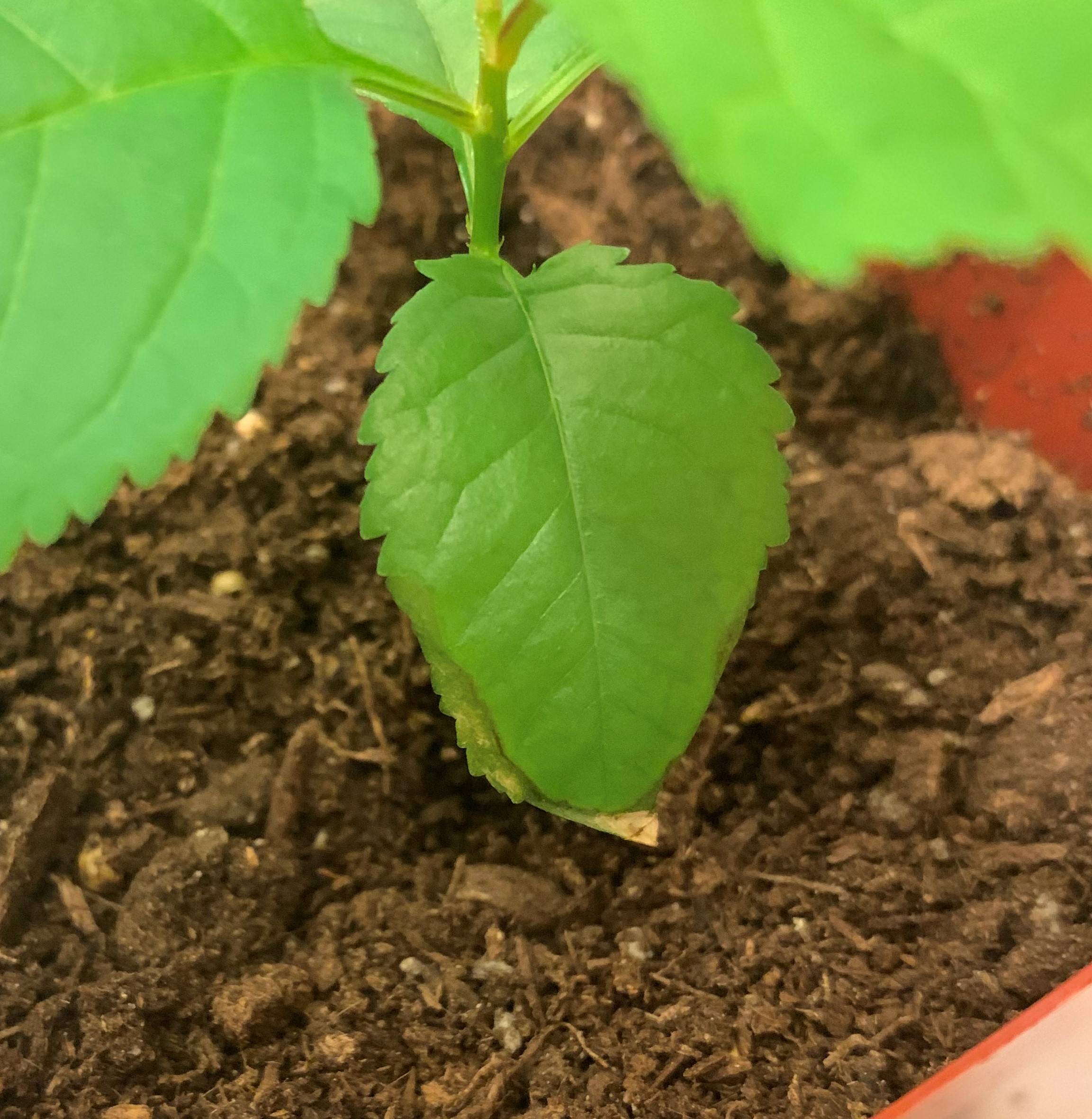 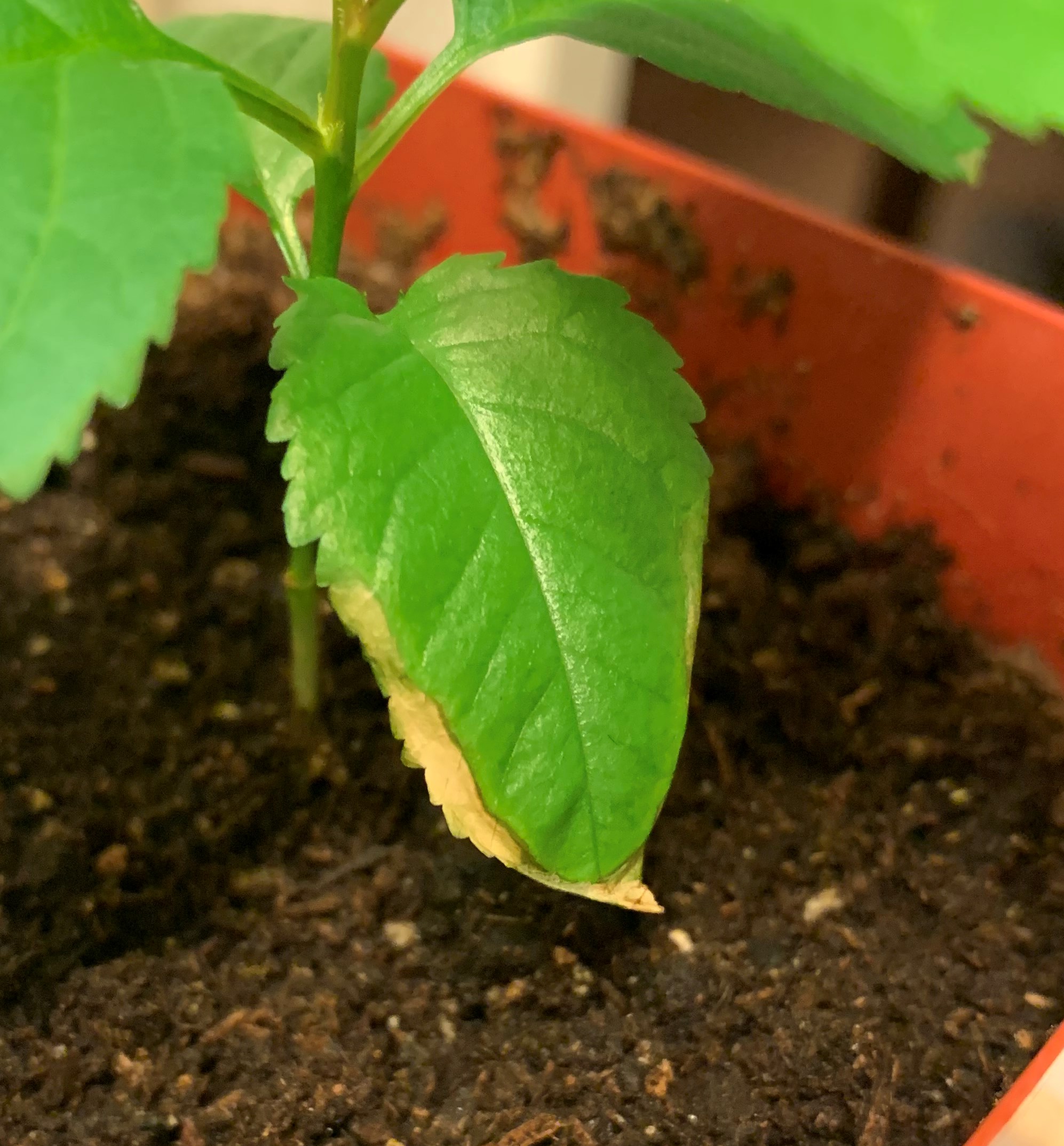 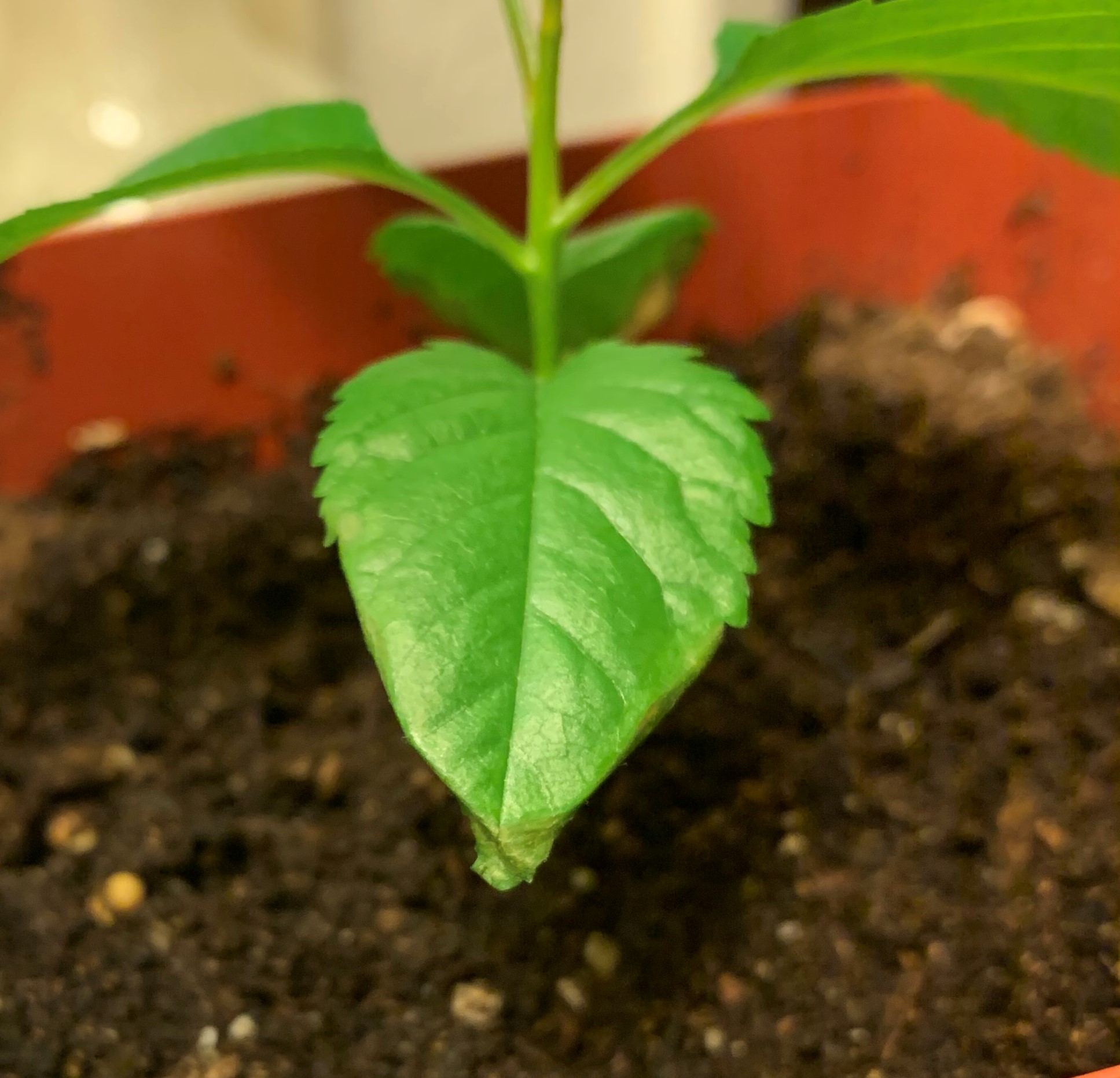 Here is a wider shot of the entire plant, today: 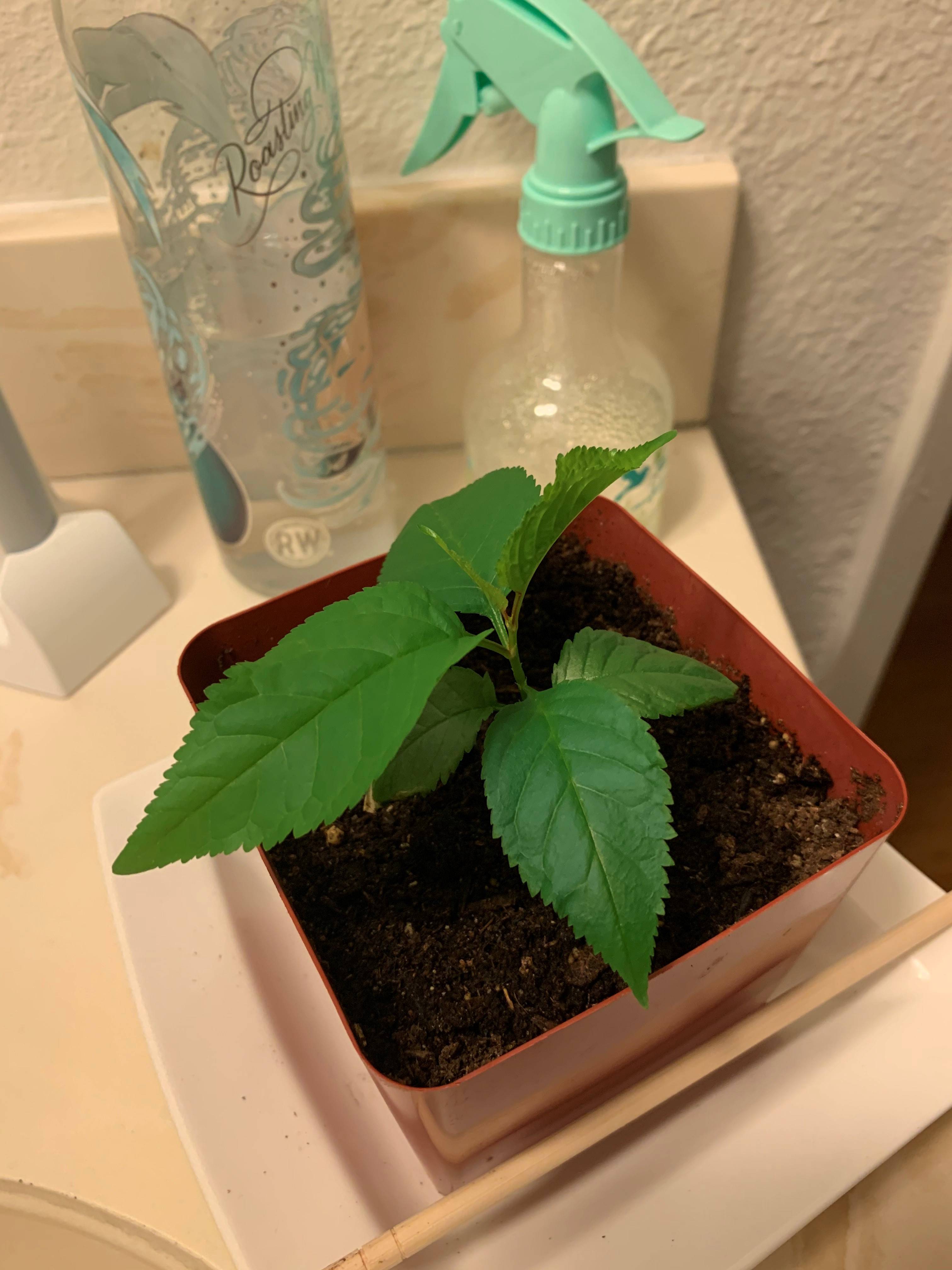 Here's the potting soil I used to plant it, probably about 30-40 days ago when it had just sprouted after stratifying in the fridge: 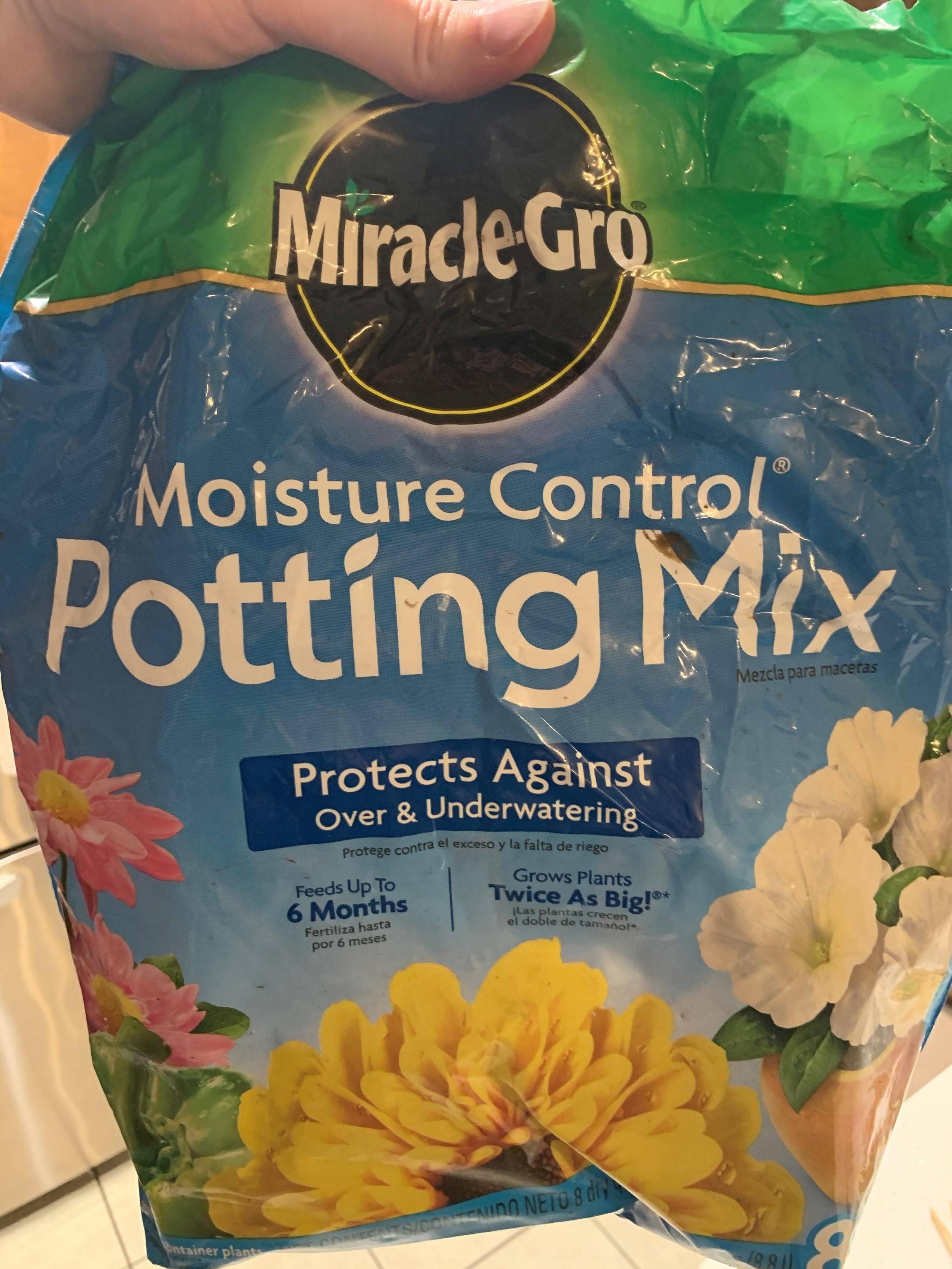 I wouldn't worry about pruning off the leaf - the problem is likely that the plant is growing indoors - it needs to be outside. I don't know what your outdoor temperatures are like currently, but (assuming it's not bitterly cold) it's probably best to harden it off over a period of a week or so by leaving it out during the middle of the day for about 3/4 hours, then move it back inside to somewhere cool, move it back outside the next day and so on, extending the period you leave it outside during the day, till its outside all night.

Cherry trees tend to put out a lot of large or long surface roots, so it will need to be transferred to the ground once it gets to about a foot tall. Note also that cherries do not come true from seed - you may get a very good cherry, or you may get one that doesn't fruit at all. General information on growing cherries (named varieties, not from seed) here https://www.hunker.com/12311379/how-to-grow-cherry-trees-in-california

In regard to watering, the first of the photos shows what appears to be dry soil - while its in a pot indoors, water when the surface of potting soil feels just about dry to the touch, water well, then empty out any excess water from the tray beneath after 30 minutes.

Andrew, I agree with Bamboo, the problem is not that a leaf is touching soil. There are a couple of hints in your photos to suggest over-watering. Looking at the damage on the first and second photo, there seems to be some spongy cell degradation, prior to browning. This kind of leaf damage is typical of plants that have been sitting wet, with insufficient oxygen around the root system (low Air Filled Porosity AFP of the potting soil). Planting into 100% peat will worsen the problem. If at all possible, remove the tray from under the pot or do as Bamboo suggested and empty the tray 30 minutes after watering. You could also increase the drainage by lifting the pot off the ground with 3 or 4 pieces of broken tile/river pebbles of similar thickness or put the pot on a wire stand. This will allow air flow around the pot’s drainage holes, helping to dry out the commonly saturated soil in the bottom one third of the pot.

Depending on your daytime temperatures, you could try adding bottom heat to the pot. This will stimulate root and leaf growth. The easiest way to do this is to buy a 20Liter/5galon bag of relatively fresh cow manure. You need to buy a warm one. If the bag on top of the pile in the garden centre are cold, search for a warm bag lower down. Fungus and bacteria in the manure are breaking down the manure and creating heat as a byproduct. Place the un-opened bag on some slats of wood, so that the cold ground doesn’t cool the cow manure and place your pot on top of the bag. This should be enough to warm the potting soil. Alternatively, keep the bag in the shed and use portions of the cow manure in bags that you change each week.

I don’t recommend watering with distilled water, for the same reason that we shouldn’t drink it. Distilling water may remove the calcium that makes it hard/alkaline but it also removes all other electrolytes that facilitate the flow of water from the soil into the roots. There will be electrolytes in the potting soil but given that it’s an old bag, many of these may have leached out. You could make a cow manure “tea” by placing a cotton or hessian bag of manure in a bucket and filling it with water. After a day or two use about 1 cup of this concentrate to make a tea with 10liters/2-3gallons of water. You could water the plant with this once per week and use the rest on your garden.

More importantly though, at this stage of the plant’s life you want to promote root growth as much as possible. For want of a better phrase, the “plant hormones” that promote root development are found in abundance in some seaweed species like kelp. Synthetic concentrated forms of this plant hormone are sold for promoting root growth in cuttings but I wouldn’t use those on your plat without professional advice about dilution rates. Ask for a bottle of liquid seaweed at your garden centre and apply it at the concentration specified in the label. Note that liquid seaweed is not a plat food, fertiliser or leaf growth enhancer. It promotes root development and is reportedly a useful ground soil conditioner/tonic (whatever that means).

For future reference, the pot is rather large for a seedling, if that is the pot that you planted your seed in. In future, use a 2”/5cm tube shaped pot for larger seeds like the cherry. This will fallow the roots to fill the space of the tube before potting on to a 4”/10cm pot. I would also add something like a course river sand to a regular potting mix to increase the drainage.

Not the answer you're looking for? Browse other questions tagged trees diagnosis leaves seeds cherries or ask your own question.

11
How much should I water my cherry tree sapling?
13
Cherry sapling has orange dots on its leaves and the tips are wilting. What could be wrong?
7
Cherry sapling has wilted leaves, dried trunk; is it dying?
3
Why my White Bell Peachleaf Bellflower's leaves are curling up or leaning upwards?
7
Orange seedling leaf browning, curling, slowed growth? Please help!
1
Cherry tree with wilted and dried leaves
1
Help with a (possibly) dying cherry tree sapling
3
My "Ficus religiosa" sapling stopped growing. How to make it grow again?