Should this plant be grown indoors or outdoors?

I want to know if this plant should be grown indoors or outdoors, and (if possible) what is the name of this plant? 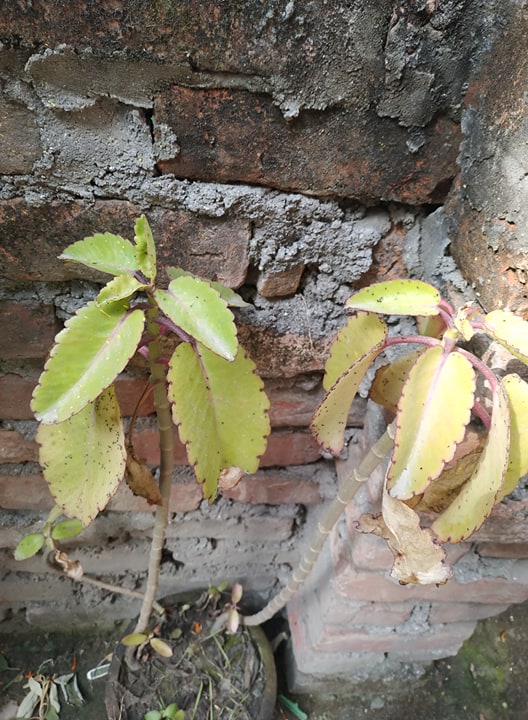 identification indoors outdoor
Share
Improve this question
edited May 2 '20 at 11:39

It's in the genus of Bryophyllum. Sometimes Bryophyllum is lumped in with the genus Kalanchoe. It has gone back and forth a couple times. The newest genome testing is showing that Bryophyllum should remain its own genus. Your plant is not in good enough condition to tell the exact species.

If you live in a tropical region it can definitely be planted outside. But, should be done with caution. In some parts of the world Bryophyllum species have become invasive. They have the ability to reproduce asexually by producing small versions of itself on the end of its leaves. These small plantlets drop and blow away with the wind. They root very easily. Some Bryophyllum are called Mother of Thousands or Mother of Millions, because of this trait.

Some of the species only create replicas of itself when a leaf has been removed from the main plant. Yours does not appear to have any on its leaves at the moment. it might be one of those types or more likely it is too stressed to clone itself.

They like bright lights either direct or indirect. But, can grow in full sun to part shade. They are a type of succulent, so the biggest growing concern is it getting over-watered and rotting. Which is not normally a problem with this plant because it is very adaptable to many climates unlike most succulents.

Not the answer you're looking for? Browse other questions tagged identification indoors outdoor or ask your own question.

2
Are garden gnomes and similar decorations safe to install indoors?
8
Can someone help me identify this type of fennel / aniseed?
11
What is this plant with red-pink lines/veins on its big green rounded leaves?
8
What is this plant with opposite leaves, dark stems and dark leaf venation?
1
What's the name of this plant? And why the leaves become yellow?
0
Help what type of plant is this?
3
What is the name of this variegated plant?
2
what is the minimum lumens of light required to grow a single tomato plant and similar flowering plants Indoors?
2
Can fruiting plants detect that they are in an indoor environment?