good plants for a marshy area?

I'm trying to add some plants to our backyard that can do well in healthy soil that does get very marshy several times during the summer. It's an area that receives some sun and some shade - probably more shade than sun.

Our backyard has an area that becomes marshy when it rains heavily, which is maybe 10 days throughout the summer. A large, beautiful catalpa tree is growing near the front center of the yard and that tree shades much of the area as the sun moves throughout the day.

Behind that tree, there is a gentle dip in the yard all the way from one side of the yard to the other with small pebbles in the center of the dip. It's very straight, obviously man-made, and when we bought the house several years ago, the inspector of the property said it was a "natural drainage ditch" constructed to allow rainwater to run across the yard.

It was easy to see that all the back yards had the same construction and that the intention was for the water to run out the end of the last backyard on the block into the ditch on the street. And it worked that way for years with no problem.

You possibly can guess what happened. A new neighbor moved in to the house next to ours and blocked the drainage ditch a few years ago. Almost immediately, our backyard became a swamp during rainstorms. We explained to the neighbor how the ditch works and he said he didn't care. He didn't want all that rainwater running across his yard.

So now, we have two choices. We can block the ditch on the other side and flood our other neighbor's yard, or we can try to figure out what to do with a backyard that gets very marshy eight to ten times each spring and summer.

Two summers ago, when this started, I just tried to deal with the neighbor. Last summer, I started trying to add plants to our back yard to help the marshiness, partially blocked the other side, and reopened the blocked side in several wider places that were hard for him to re-block. We can't deal with all the water from the block, but we can deal with some. He didn't seem to notice that I'd reopened it.

The remaining problem is that the recurring marshiness is causing a lot of mud around that narrow ditch. I tried planting ferns and lilies around the ditch in the healthy soil to hold the soil in place and stop the muddiness from being so severe last year but they all died.

Does anyone know which types of plants do well in warm, northern Kentucky weather, just south of Cincinnati, when planted in good soil that gets marshy several times a year?

I have a few suggestions that I know will work from personal experience. The first four are Kentucky natives:

These four suggestions will give you flowers at various points throughout the growing season, starting with Marsh Marigold, then Glade Mallow, Marsh Milkweed, and Turtlehead. All will handle part-shade to full shade.

Beyond these four natives, you should think Rain Garden plants. The list I've linked to shows both sun and shade and includes non-natives like Ligularia (an excellent choice, BTW). This list is general, but I think most of the plants listed should be fine in Kentucky. The Carex (Sedges) list will work very well as groundcovers (especially C. pensylvanica). You could try a local extension web site for more possible local suggestions.

A shrub to consider is Cletha alnifolia (there are many hybrids, varying in size, flower color, and form). They like it moist but also tolerate dry shade/part shade. I would plant these on the upper reaches of your flood plain, though. Also, be aware that cletha form clumps (they spread stoloniferously). They bloom in late July/early August in Wisconsin and may have good fall color.

There are quite a few plants that can handle a wet area, but in the shade narrows it down. There are four species of Cornus (Dogwood) that grow very well in wet area and can take part shade locations. These do not get the flowers that the tree dogwood gets. These do flower. All have clusters of white flowers followed with berries. Bright white berries. All have wonderful fall colour. Most have great colour bark in winter. Two of them are commonly called Red Twig Dogwood. These four Cornus are;

Cornus amomum or Silky Dogwood This dogwood thrives in wet conditions. Can tolerate full shade. It can grow anywhere from 6-12' tall. White/Yellow Flowers with White or Blue Berries. This one lacks fall colour and does not have colourful bark in winter.

Cornus sericea or Red Twig Dogwood or Red Osier Dogwood is native to most of North America. It is a strong vigorous plant that can tolerate the most soil conditions, grow in part shade, get 6-9' tall, has red-yellow fall colour, has white flowers in spring, white berries in fall, the most range of stem colour based on the cultivar you buy. Some will have dark red stems or brilliant Red or yellow orange or Red-Yellow-Orange Stem colour. One of the best cultivars is called 'Cardinal' This is the one with the most brilliant colours of red, yellow & orange all winter long. 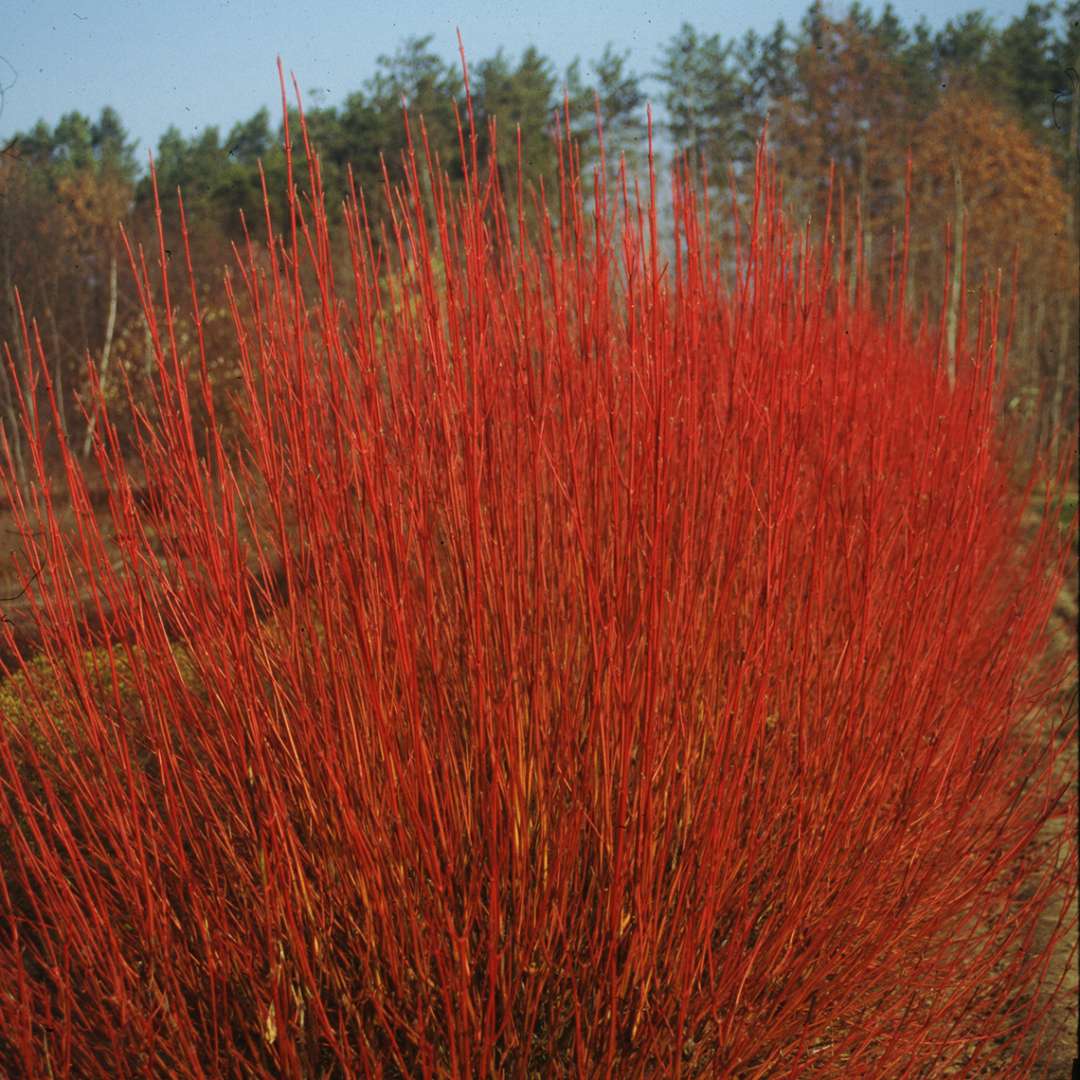 The coloured bark willows might be useful there; they need stooling hard every year in spring to keep them shrubby and to ensure production of the brightly coloured stems, which are at their best during winter. It seems they will grow in USDA zone 6, which Google tells me your area is. Salix alba 'britzensis' is commonly known as Coral bark willow https://www.pleasantrunnursery.com/plantname/Salix-alba-Britzensis. Salix alba 'vitelina' has bright yellow/orange stems. You may need to water during dry spells though - they really do prefer to be in pretty damp, not to say soggy, soil.

Not the answer you're looking for? Browse other questions tagged lawn-repair perennials wildflowers ferns or ask your own question.

34
Making a yard that's settled more level?
15
How do I quickly remove crabgrass without too much manual labour?
6
What would be a good "cat grass" for the central Texas heat?
3
Sodding a grub-damaged area in Southwest Florida
3
Yellow spots appeared in my lawn suddenly although all other area is green
6
What possible reasons could the previous owner have for burying chicken wire under the lawn?
3
Keeping healthy grass in play area
2
New construction, massive back yard...crappy lawn and flower bed! please help!
6
How/When to Remove Dead Weeds and Reseed Lawn?