What to do about white powder on moss

I've got a pot with a bonsai tree. Recently I started seeing a white powder over the moss at the bottom.

Is that some kind of fungus? What can I do about it?

The tree pot is inside, gets quite a lot of sun now (summer in Oz), gets watered every 2-3 days. 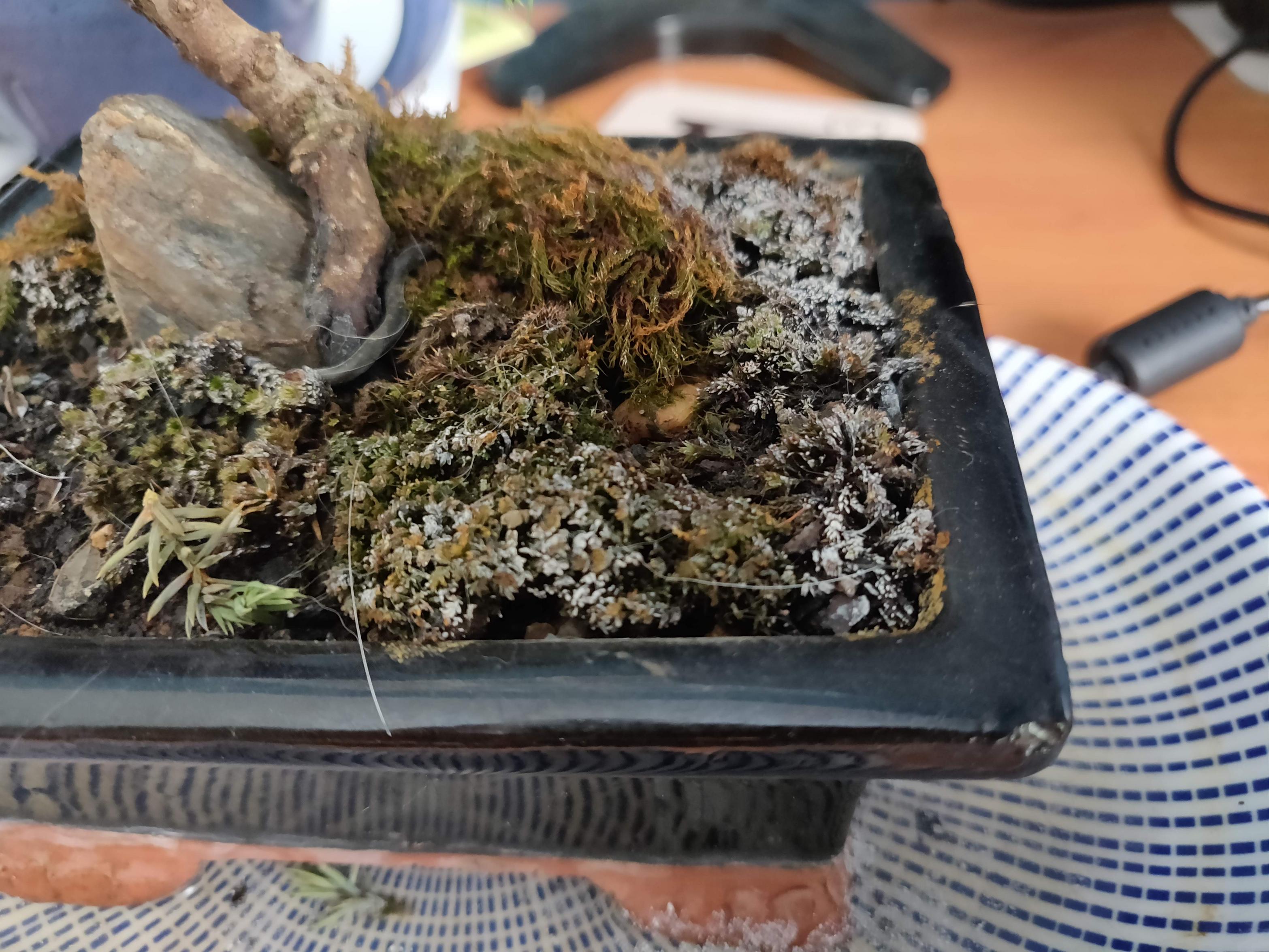 You are correct it looks like fungi growing on the dead parts of the moss.

But then again, as @kevinsky pointed out This could be the result of incorrect watering leading to salts being deposited on to the moss.

Moss needs high humidity and it would die back when facing extreme temperatures with in a few hours.

You should cut/remove all the dead plant matter to avoid further rotting.

Then simply mix a table spoon of bicarbonate soda with 1 liter of clean water and spray the whole of the affected area.

The thing most people dont realise about Bonsai trees is that every year or so, the soil should be removed so that the roots may be spread out to be inspected and maintained, by removing the dead roots and trimming them to fit in the pot, without looping around the pot.

This also may be the time for some roots to be shaped/exposed further to create the overall look of a miniature giant tree.

The soil or growing medium would also be replaced during this time.

And you guessed it, Most of the moss would also be replaced or trimmed back depending on what is necessary.

To take care of a Bonsai you will need some basic tools made for the job.

Also the plant pot may need changing only if you wish for it to grow a bit bigger.

To debunk the rot theory You will need a cheap and cheerful humidity meter that registers the maximum and minimum levels to see exactly what humidity extreme its struggling with if any.

And get a soil humidity meter, cheap as chips will do as long as it's a real active sensor that actually works . UPDATE: get a German soil humidity meter Although its unnecessary it might help reduce he possibility of over watering when left with caretakers.

In london I only need to water my pots about once a week or so but my plants are still tiny seedlings.

Dont forget the plant may still be tied down with wire by the roots so ensure you check that before yanking it out.

I can't tell 100% from the photo whether its fungal or simply drying out with deposits from the water you've used, but it looks more like the latter. Mosses and liverworts (I see some in there too and they are often associated with moss) do not like sunlight, especially not a lot of it, so that won't be helping, it will kill them - if you use tapwater and the moss/liverwort has dried out, that could easily explain what you're seeing.

If you're not seeing fungal strands and the white stuff does not rub off, then that's the explanation, in which case, reduce the sunlight levels - early morning or evening sun is better, water as necessary. You can also spray the moss covering with water to keep that more moist if it's very hot, rather than soaking the whole plant too often.

Not the answer you're looking for? Browse other questions tagged moss or ask your own question.

6
Is there a way to undo the damage to moss after applying a moss killer?
6
What is killing my moss?
6
Will top dressing over moss kill the moss?
6
What kind of stone/surface can I grow moss on?
6
What type of moss is best suited for a hanging Kokedama (moss ball)?
8
What is this moss-like plant?
4
Lawn repair - Heavy moss, damp.
2
What is this (moss/mold?) growing in my Dill flowerpot?
0
Question about illumination for moss