What causes algae growth in sealed terrariums and how much of a problem is it?

I've had a bottle terrarium since May last year, and it has seemed quite healthy for most of that time. The plants have at least grown very well. It has a substantial layer of sand and gravel topped with charcoal to hold water, and it has neither appeared overly wet nor too dry, so I have not added water since we constructed it in May.

In the last week a layer of green stuff, algae I assume, has spread around the top of the glass. There are a few places with big spots up to 1.5mm across, while there's a layer of what looks like mixed condensation and algae covering the rest of the glass. There's also some thicker algae directly above the soil (not really visible in the below photo).

A Reddit discussion suggests that sunlight leads to algae growth, which would make sense for ours as we recently moved it because of Christmas decorations into a location which would get a small amount of direct sunlight in the mornings. This page says that it can just be cleaned with a paper towel and maybe a little vinegar.

Does sunlight sound like a likely cause, and if so, after cleaning the glass well, will moving the terrarium to a location which won't get sunlight prevent it from growing again? 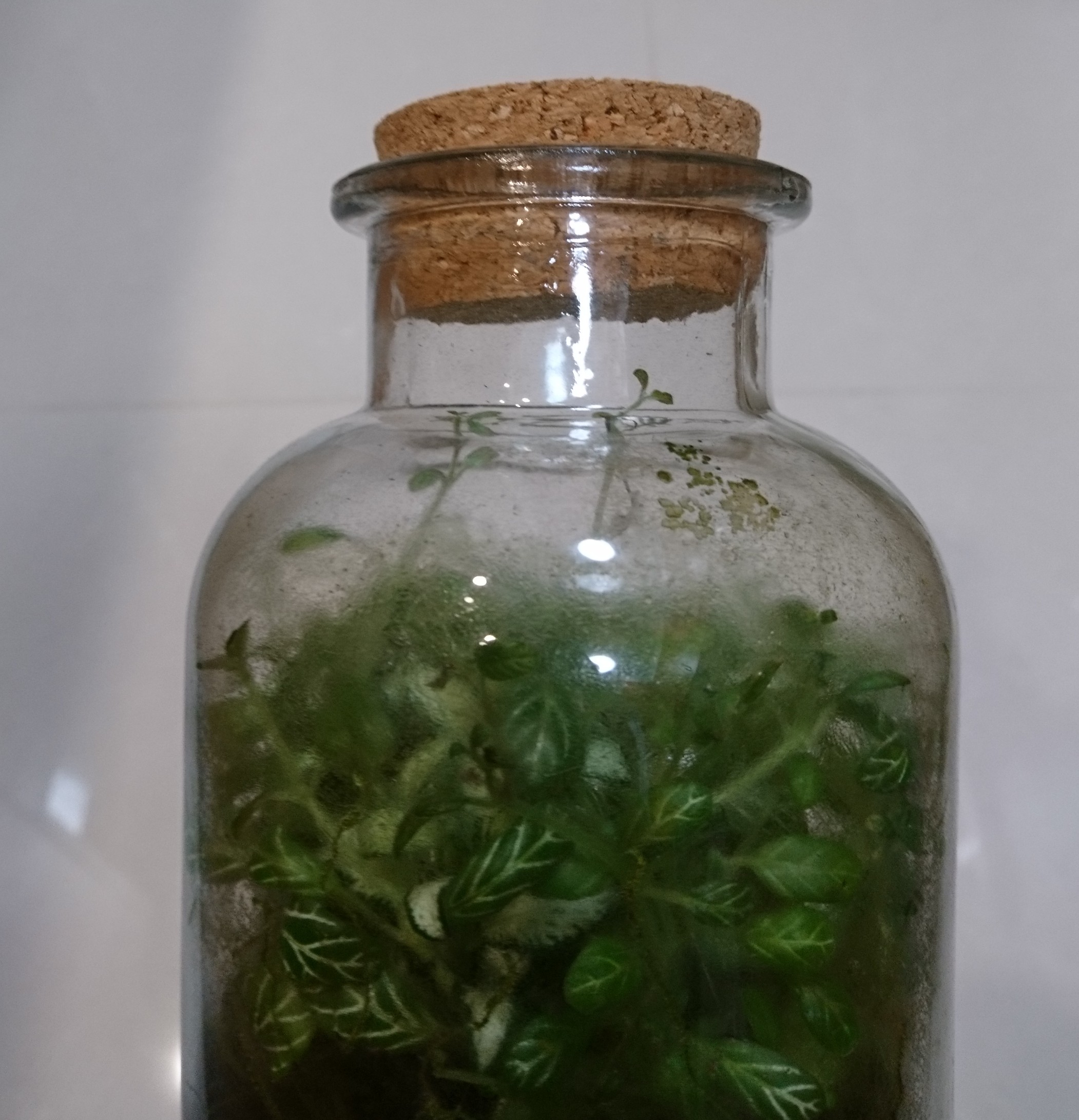 Yes, algae will respond to increased light levels. The more light, the more the algae will grow. The conditions inside the terrarium are ideal to support its growth - nutrients with constant high humidity. Your choice of plant, Fittonia, is good since this plant will survive quite happily in low light conditions. So moving the terrarium to a much lower light situation will reduce the algae activity, perhaps not to zero but quite a lot, and will actually benefit the Fittonia by encouraging larger leaves, and at the same time reduce the condensation on the inside of the glass.

If the algae continues to be an issue, consider moving the terrarium to a container which is easy to clean on the inside. A dash of vinegar in the wiping solution will help to cut through any accumulated algae deposits stuck to the glass. The goal is to encourage large, healthy leaves with vibrant colours highly visible through sparkling clean glass.

Not the answer you're looking for? Browse other questions tagged indoors algae terrarium or ask your own question.

18
What can I grow in a sealed office environment with no natural light or airflow?
3
How can I prevent algae growing over my patio area?
4
Will green, algae-like blooms in the side of a clear pot cause any damage to the plant and its roots, and if so, how can I get rid of these?
4
How much water do these hydroponic office plants need?
16
Is this heavy blue-green growth on my tree trunk and branches a form of lichen?
5
How much light is too much for a Maranta Red house plant?
1
What causes young peppers, lettuce, arugula and basil to “faint”, dry out and die?
1
What went wrong with my potted creeping fig?
1
mealybugs, spider mites, on ALL of my plants!
1
identify plant and problem. maybe a Sansevieria?