I had a pot of hydrangeas for a few months which I keep outside. I water them twice a day: in the morning and in the early/late evening. They receive little to no direct sunlight - which according to multiple internet sources is perfect. 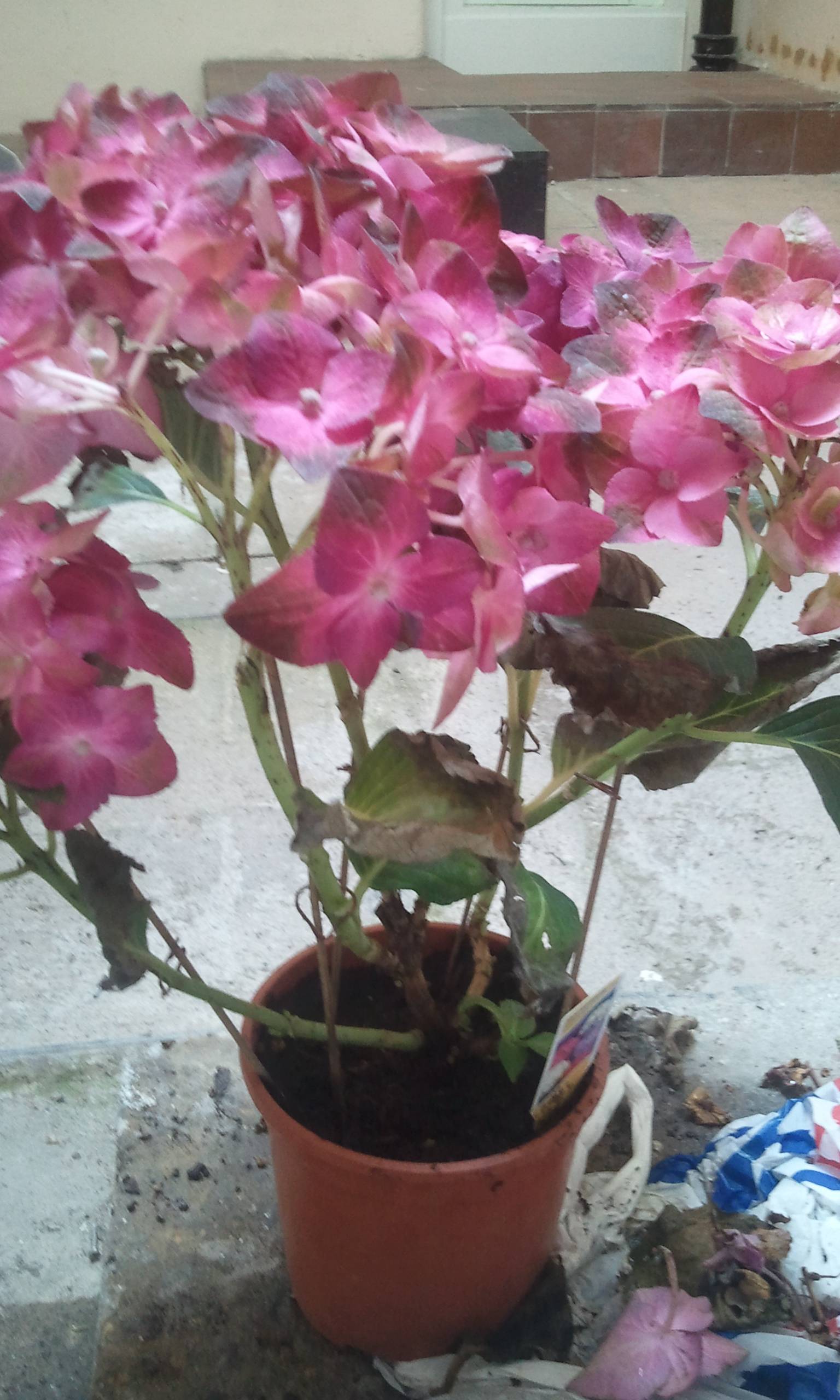 The flowers have had these dark green tips for some time. Many of the leaves are also wilted from the middle towards the tips. Also note the brown steam, though I am assuming that this is normal?

Perhaps I am over-watering them; however, I used to also water them (but a lesser amount) and was told by a gardener that they need a lot more water (they were quite dry).

What is wrong with my flowers? 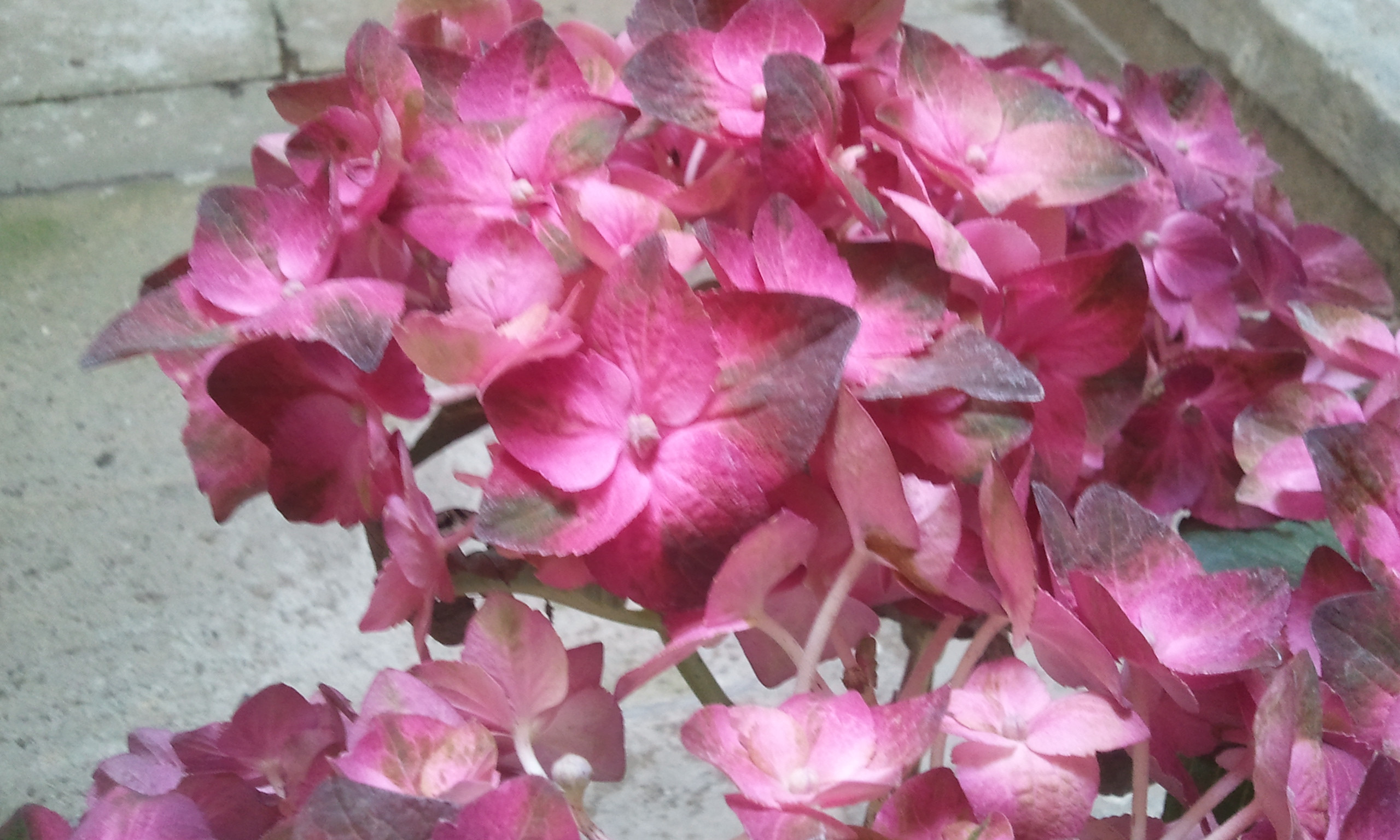 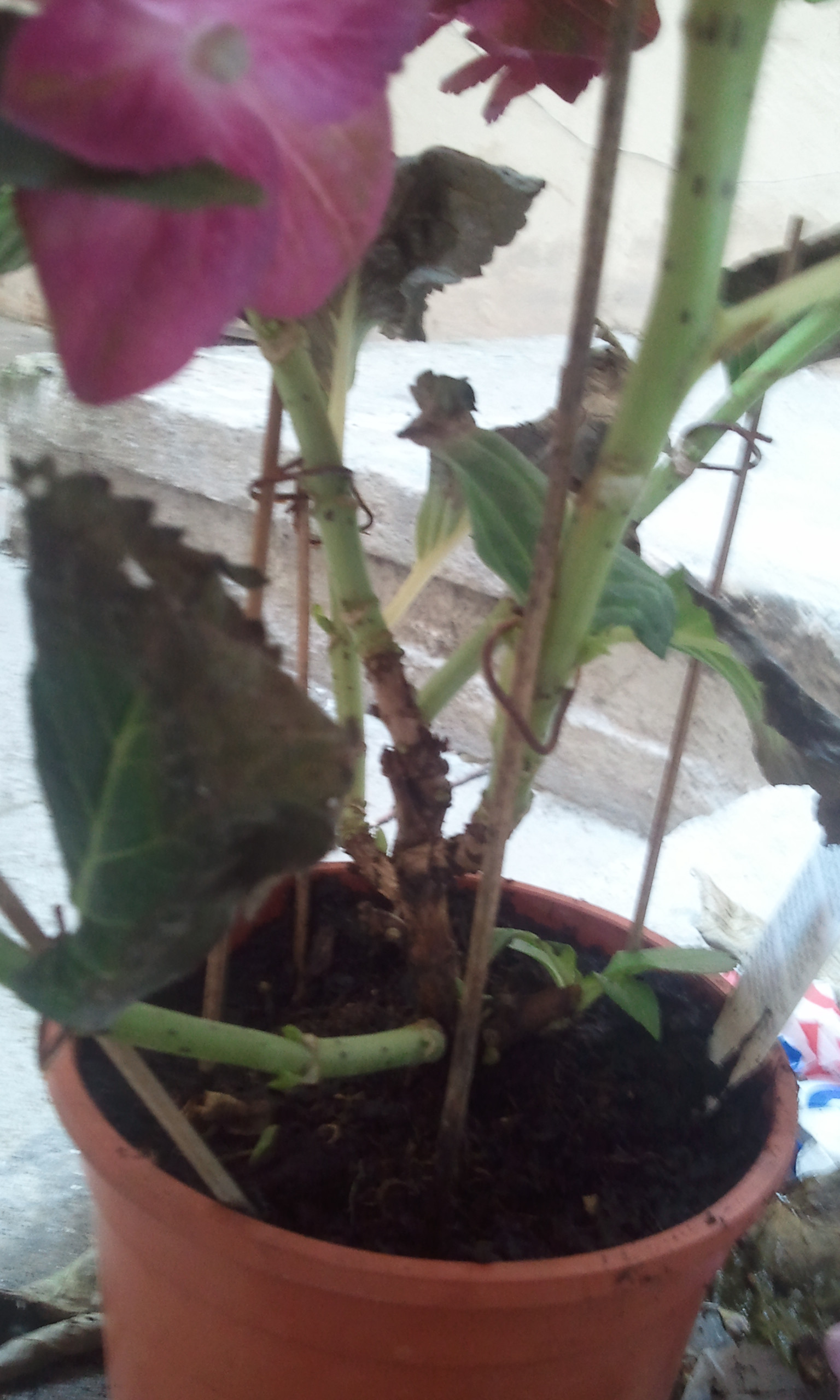 I'm not surprised the flowers are in trouble - the whole plant is. The pot's too small - suggest you turn it out and pot into something bigger, with at least an inch all round and at the bottom for 'empty', fresh potting compost so that the rootball can grow into it. There's a bit of healthy, new leaf growth struggling to come on at the base on the right of the picture, so the plant is struggling to carry on, despite being so constricted. I can see there's a label in the pot, but can't see any varietal name - most H. macrophylla varieties (which this one is) get pretty large, often making 7 feet by 7 feet, but there are a few newer, smaller varieties, so these might be called H. macrophylla 'Baby Blue' for instance. You haven't said where you are in the world, but in the UK, Hydrangeas are hardy outside year round, although in a pot, they are slightly more vulnerable in colder regions here.

Update: As it just says 'hortensia', you still don't know how big its meant to get - these vary between 3/4 feet and 6 feet. You will need to pot it on, certainly bi yearly, possibly yearly, as it matures, and if you can find a spot actually in the garden for it, it'll do better there, though best planted out in autumn rather than now. Watering info contained in my comment below - make sure the pot has drainage holes, which then makes it impossible to overwater because it just runs out. Also best stood on something like pot feet or broken bits of roof slate or whatever to keep the base of the pot off the paving beneath. Update 2 Seen the trough, but although its lovely, and would be great for temporary planting, its not suitable for growing a large shrub like a Hydrangea - its way too shallow. Best to choose something with a depth of 40 cm.

Not the answer you're looking for? Browse other questions tagged watering flowers hydrangea or ask your own question.

5
Watering of tomato plants with plastic bottles
5
What is this small annual with narrow gray/green leaves and rust colored daisy-type flowers?
5
Potted poinciana leaves turning yellow
13
Tillandsia (air plants) Turning Black and Dying After Watering
5
How can I tell if a plant is goldenrod or ragweed?
6
Why does my Mathilda hydrangea have an old green flower and a new purple one on the same stem?
1
What is this plant with red flower and green leaves?
1
Marigold flower partially wilting and leaves are curling
1
How much to water indoor snowdrops?