Why are my lemon tree’s leaves curling? 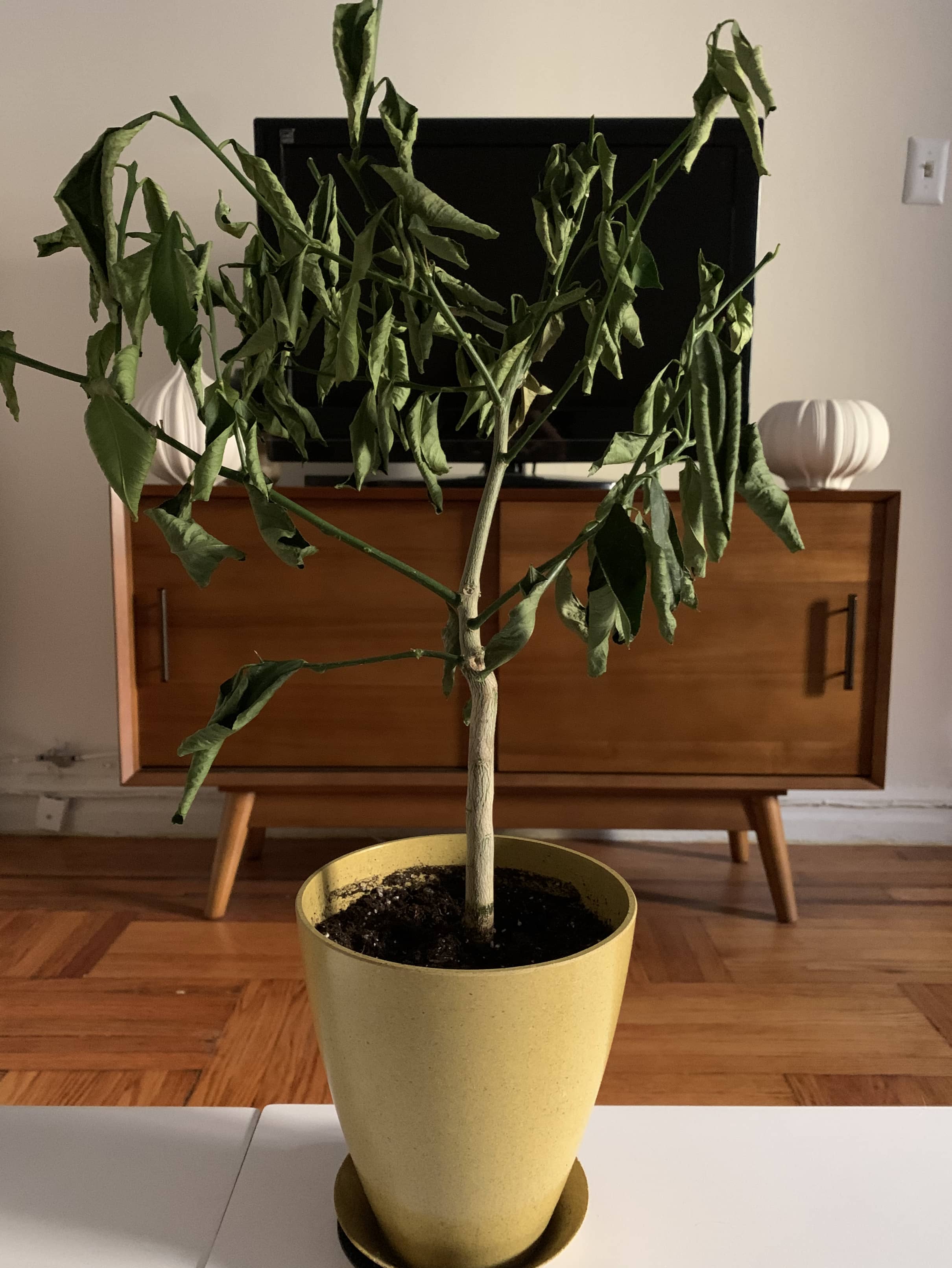 Help! Our lemon tree’s leaves are completely curled. They started curling around four days ago or so. We thought it was an under-watering issue, but since a heavy watering nothing has changed (maybe even got worse).

It is a watering issue. First I will discuss cause, then about way you might be able to save your plant.
Both under watering and over watering, have curled leaves when the leaves are completely dead. In the case of under watering the plant dried out. The leaves being the thinnest part of the plant will die the quickest. It would be losing water in two direction in transpiration and some would retreat back into the plant.
In this case the leaves should have been somewhat curled at first, an indication it is losing more water than it is taking in, this may have gone on for days or just a day depending whether it is in full hot sun or not. In the case of over watering the roots become saturated in water. There are open pores in the soil for the roots to absorb oxygen, so the roots start to die. When the roots begin to die they are unable to get water to the leave, so the leaves curl up and die. What can you do? You need to take the plant out of the pot. It sounds like your last ditch attempts were to over water the plant, so the soil is going to be too saturated for the plants roots to recover.
Is the drain hole plugged with dirt of something? Does it have a drain hole?
If it does not have a drain hole you need a new pot. If it has no hole it is obvious it was overwatered. Now, look at the roots are the smelly and slimy, if so you over watered. You need to start by buying some new potting soil. Make sure it is potting soil that is well draining like cactus and succulent soil. Even cactus and succulent soil should have some perlite or pumice added to it for citrus. Citrus need very well draining soil. Wash the pot. Wash off all the soil from the roots. Remove any brown roots that are brown and limp or slimy. Then pot the plant again. Keeping it on the dry side. Only give enough water to moisten the soil but not saturate the soil. You will continue to only give the plant enough water that moisten the soil around what is left of the roots. Eventually it may grow new roots. You will know that when it starts to leaf out again. After that you can start to water it normally.

If the plant roots are not white, but not slimy, you probably underwatered your plant. You still want to buy new soil. Start with washing off the soil from the roots.
Then you will do the same watering routine you would do in case of it being overwatered, because the plant will need to grow new roots.

There is a large possibility this will not help at all. So, I think you best option is to throw the plant out and start over again. But, inspect the roots first, so you know what you did wrong. Make sure you have a pot with drainage holes.

This article is pretty good. Except it says to use a moisture metre. Those metres do not work in rocky well draining soil. Use a bamboo skewer to check the moisture of the soil. Leave the skewer in the pot. When you think it is time to water, check the skewer. If it wet, do not water. If it is dry water your plants. If it is somewhere in between then water your plant if it is summer. If winter wait a few more days.

13 steps to caring for a citrus plant

I also suspect that the cause is over watering and its evident from looking at that layer of algae that has formed way below at the base of the trunk. Soil that stays wet for too long invites algae which usually subsides when the soil is allowed to dry but however in your case, it may be a little too late cause the plant appears to be on the verge of dying. Best to take it out, examine the roots and repot.

Not the answer you're looking for? Browse other questions tagged fruit-trees lemons or ask your own question.

17
How should a lemon tree with yellowing leaves, peeling bark, and small fruit be saved?
4
Are lemon tree roots unusually damaging to nearby concrete?
6
How can I save my Meyer lemon tree?
1
Avocado tree growing unhealthy - Brown spots, frizzle leaves
2
3 Mango Trees (6 months old); Grayish-Orange Spots heavily progressed; Blackening/brown curling leaf tips; 1 Mango Plant losing all its leaves!
1
What causes sudden discoloration and leaf drop in a mature lemon tree?
0
How can I rescue this lemon tree?