I planted seeds in a seed tray in summer 2018 and they sprouted this fall. I transplanted into 6" pots. I'm growing indoors in my south facing window, rotating 1/4 turn daily and placing outdoors in sun for a couple hours a few times a week due to 30-50 degree weather. They have grown to 6"-8" tall. Some have very long horizontal growth (5-6") and seem to be slightly drooping. These seem to be the third set of leaves that have come out. I know this is not the optimum time to grow seedlings but I couldn't bear to discard them. I am in Reno, zones 6B-7. Any advice will be greatly appreciated. Many thanks. 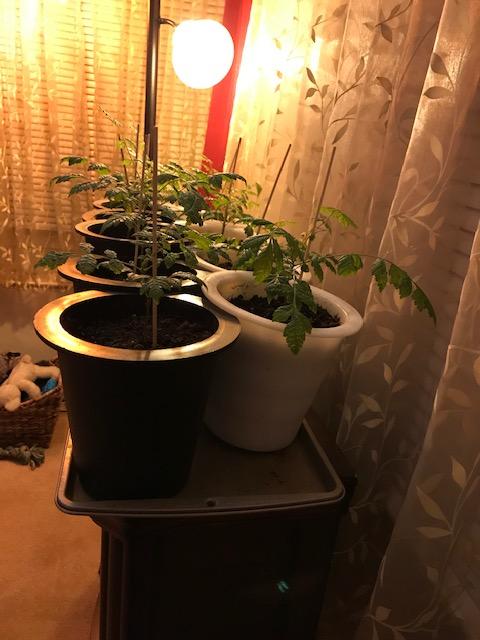 The problem is you've got them indoors. These trees (Koelreuteria paniculata) are deciduous and hardy in USDA zones 5-9, so should be able to tolerate a winter where you are. Being deciduous, at this time of year they should have lost or been in the process of losing their leaves for winter dormancy. Added to that, moving them outdoors for short periods and bringing them back in again to the heat won't be helping.

I think the only thing you can do is start to harden them off gradually - leave them outside for an hour or so in the middle of the day, and when you bring them back in, leave them somewhere cooler than average indoor room temperatures if you can. If that is a growlight of some sort in the image, stop using that too. Then gradually extend the number of hours they're outside over a period of a week or two in one continuous and extending process during that time, till finally, they're out all night, preferably choosing a milder night. Cluster the pots together outdoors in a sheltered spot (against a house wall or whichever area you know is less exposed) to reduce the risk of the soil freezing in the pots (if it gets that cold, that is, below 32 deg F for more than a week both at night AND in the daytime). If you have a cold greenhouse you could stand them in there when its very cold, otherwise, try providing some insulation round the pots to try to stop them freezing, because once they're hardened off, the only thing that might kill them is the soil freezing in the pots.

Normally, I don't advise starting seeds "ahead of time". However, since you got the climate control right and you were able to grow them inside the house until spring, just follow the advice offered to you by Bamboo and harden them by gradual exposure to outdoors conditions. The temperatures are rising and it's time for growth. They have formed a main stem which looks good and will get stronger over time. You may need, at first, to support the stem until it grows stronger. There is no need to discard them and start a new seedling batch.

The plant is hardy to zones 6 to 9 according to this Gardenia website, so see if and when you can keep them outside in your area.

Not the answer you're looking for? Browse other questions tagged seedlings or ask your own question.

4
How to keep seedlings fresh?
2
Avocado Seedlings cold tolerance
2
very thin seedlings
3
Are these weeds or bougainvillea seedlings?
3
transplanting my seedlings.
3
Possible reasons for coriander seedlings dying off
1
Do I need to separate out seedlings?
1
Viability of tree seedlings with double tip
1
Herbs - Help with transplantation of dill seedling to slightly bigger pot