Help identifying a flowering plant and its pests

I recently bought a flowering plant from the supermarket, but have not been able to determine exactly what it is (it was unhelpfully labelled as "potted plant"). Its stems are thin and vine-like; its leaves are boat-shaped and about 3-4 cm long and 1-1.5 cm wide. The flowers vaguely resemble daisies, having yellow centres and purple petals which start out as white, and they grow to about 3-4 cm in diameter. The flower buds however, have a scale-like pattern which does not bear resemblance to any daisies I've seen. A picture is provided below: 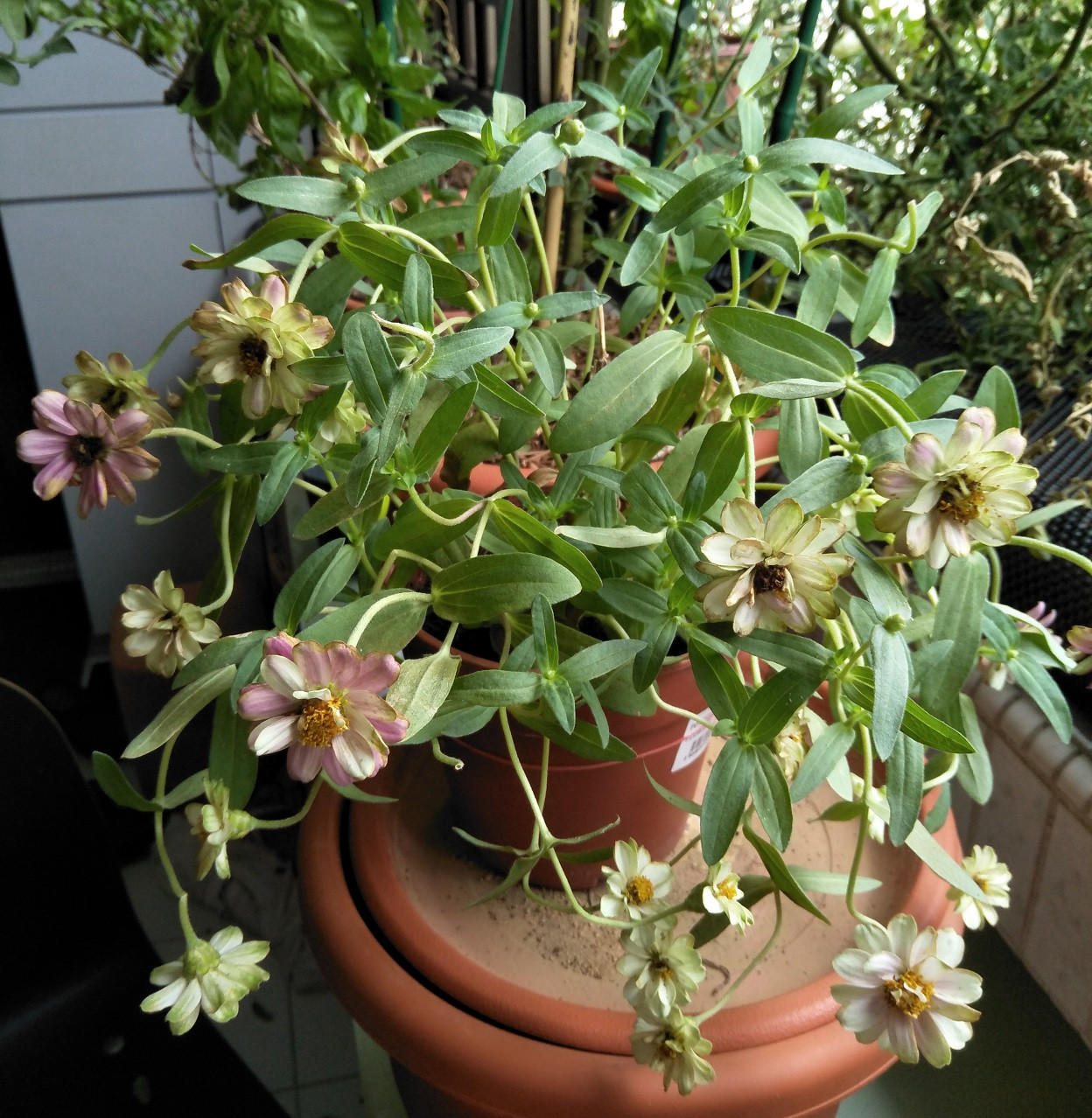 Normally I would be content to not ask the plant its name, but within a few days it attracted what I assume to be pests. These are about a millimetre long, and shaped like waterdrops. The younger ones are translucent, and they turn progressively darker shades of green as they mature. They cluster mostly on the undersides of the flowers, rarely on the leaves. I assume that whatever lays them flies, as I live in a high-rise apartment. Another picture for reference: 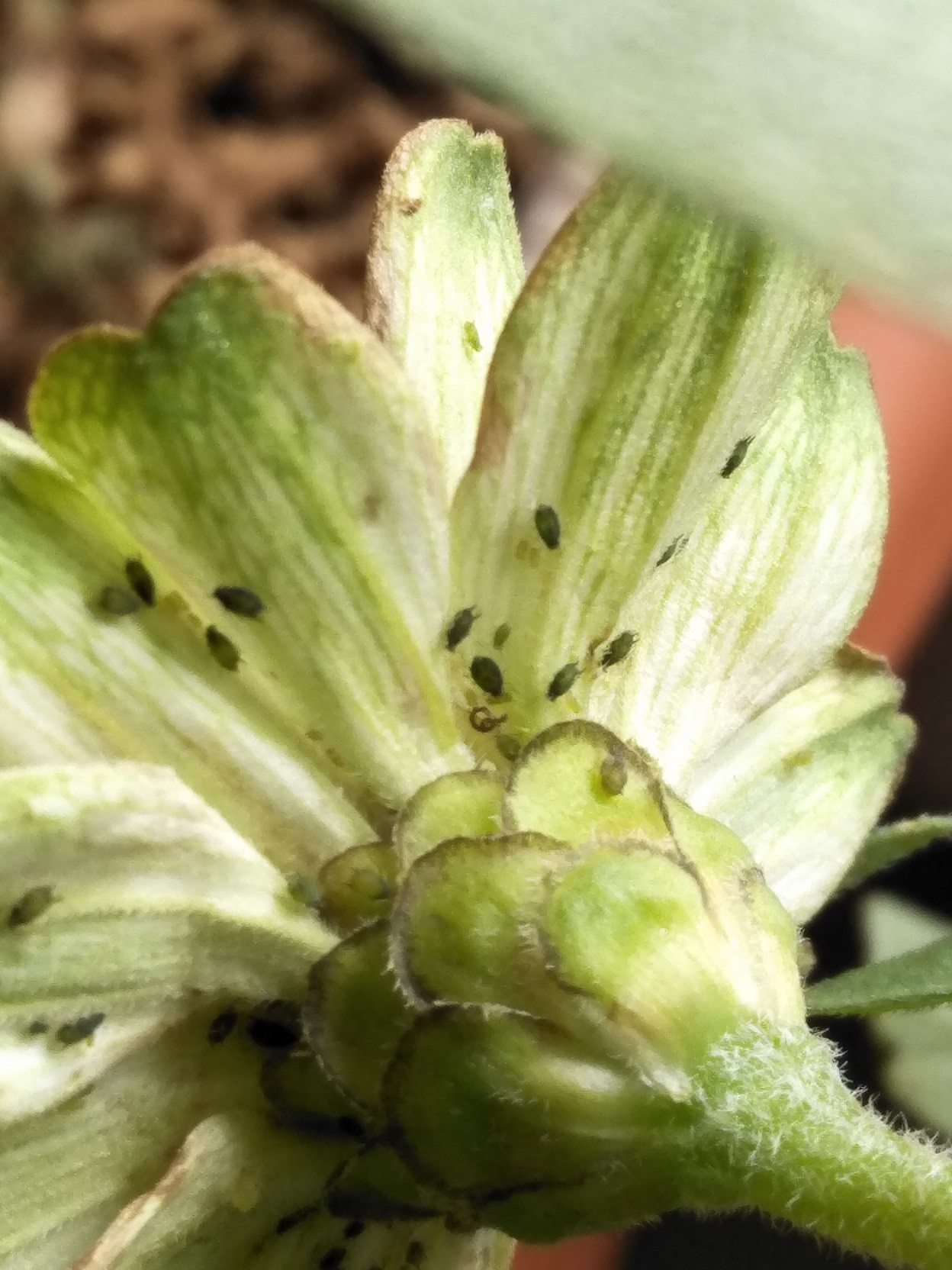 I initially thought they were some variety of aphids, given that ants had also shown up and begun enthusiastically fondling them, so I used white oil and pyrethrin sprays. These didn't work. Neither did removing them with water and a fine brush. It should also be mentioned that these insects seem to be specific to this plant, as they only arrived when it did, and show no interest in the surrounding plants (tomatoes and basil).

If anyone could assist in identifying these, and perhaps a course of action for controlling these unidentified insects, I would be very grateful.

Postscript: I live in Singapore.

This is a Zinnia, probably Z. angustifolia in a white variety of which there are many. The involucral bracts below the flower that you have noted are a key detail in linking it as a Zinnia - see this little discussion with associated pictures. In addition the leaves are opposite and stalkless and the petals have that characteristic shape with crease marks. The size of the flower at 1-1.5 inches also corresponds.

As to the treatment for bugs on the flowers, consistent deadheading is a starting point. Pinch off the flowers back to a pair of leaves and nuke the dead heads. Zinnia responds to deadheading with more flowers; right now your plant could do with a severe operation of this kind since that is where your pests are accumulating - this could result in very few pests and a new profusion of flowers. Otherwise you are into spraying and that would be dramatic and inconvenient.

Not the answer you're looking for? Browse other questions tagged identification flowers pests pest-control insects or ask your own question.

20
How to get rid of insects on basil while leaving the leaves safe to eat?
3
Help identifying this pink flowering plant native to Denmark
7
Help Identify this Pink Flowering Landscape Plant
2
What are these tiny white bugs on my houseplants and succulents?
6
Need help identifying brown and white spots
3
I need help identifying this plant
3
What are these tiny reddish brown insects on basil leaves?
4
Monstera with tiny white flecks (spores?), large brown spots, small white dots