I'm concerned about our Picea glauca var. albertiana 'Conica' that we keep on the balcony in a pot. We bought it sometime in spring this year and had it in the pot shown below for some time now. Throughout summer it looked good and grew several layers of new needles, however since the end of summer we've noticed that more and more brown needles occur at the outer layer rather than on the inside.

Overwatering results in root death. Then, with roots unable to move water, the top shows the same symptoms as drought.

While from probing the soil with my finger I didn't get the impression that there is excessive moisture on the bottom, it might just be that it's already too much for this tree. As we've kept it near the edge of our balcony, I have the suspicion that it got too much rain water that wasn't able to drain quick enough in this arrangement.

Is root death the correct diagnosis here or are there other causes I should look into?

Can this spruce be saved? If so, how should we intervene? 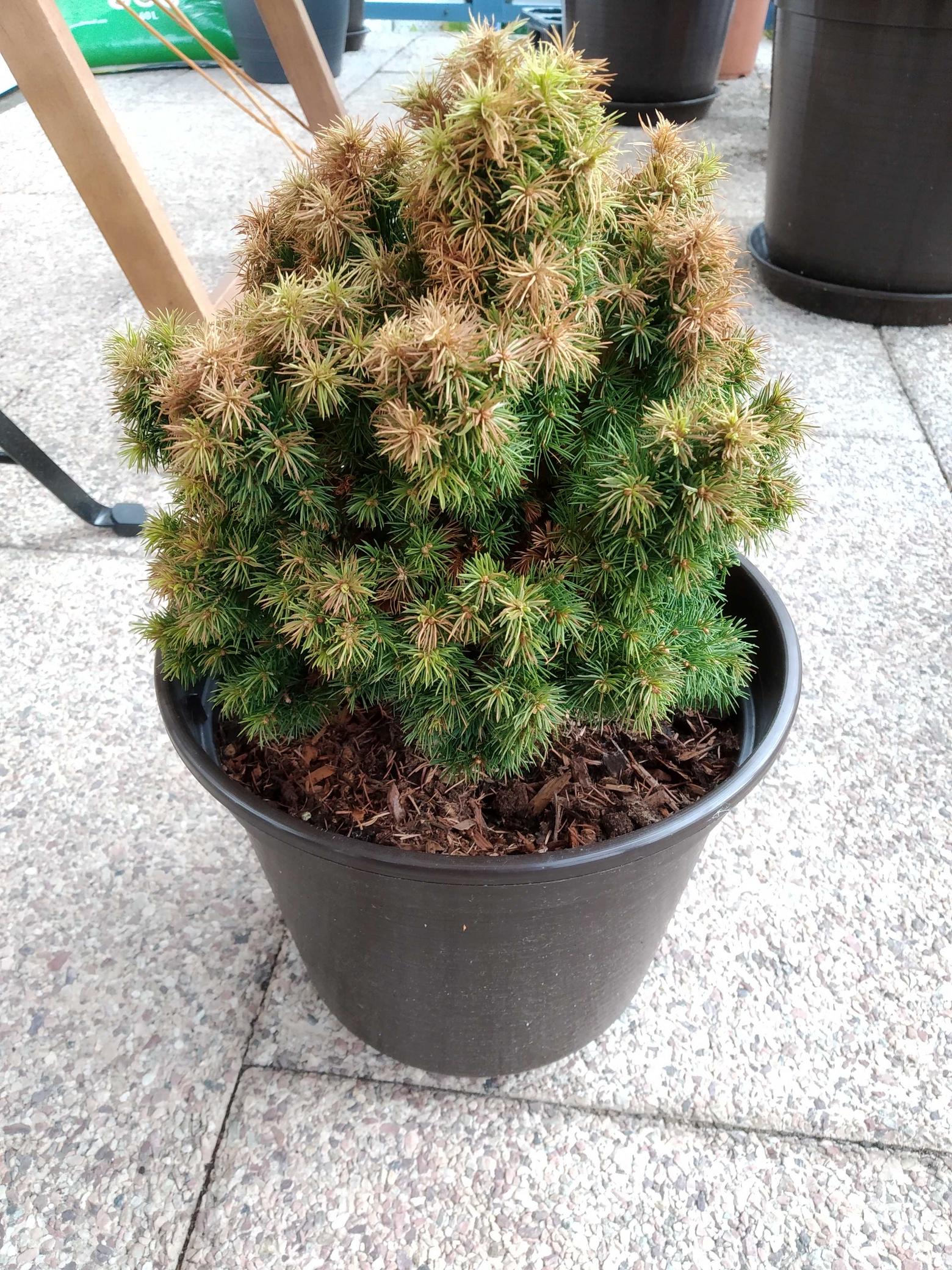 The University of Saskatchewan has a useful article on why conifer tips can turn brown. The cause can be the condition of the roots; in this case the pot is not very large and it should be possible to tip the plant on its side and pull the tree from the pot to examine the root ball. If the roots have extended right to the edge of the pot then there will be little room for expansion and there is no buffer against extremes of temperature and water availability. If there are roots at the surface of the ball these roots should be healthy and light in colour. If you can consider a larger pot then this would give the tree more room to grow, otherwise you could consider treating it as a bonsai and remove some root and replace with fresh soil.

Unfortunately potted plants are vulnerable to odd events such as being "watered" by some random cup of coffee or glass of wine which can have a dramatic effect on a single plant among many.

Not the answer you're looking for? Browse other questions tagged trees diagnosis watering pines or ask your own question.

18
Why hasn't my strawberry plant produced any fruit?
6
Why does my Norfolk Island pine tree have brown needles and drooping branches?
3
White spruce problem (yellow needles)
7
What Would Be A Good Shade Tree for Oakville, Ontario, Canada?
7
How important is full sun for a Blue Spruce tree?
12
Why shouldn't I water a Blue Spruce tree during and after transplanting it?
3
Does my hemlock tree have wooly adelgid?
6
Will dead pine needles on top of new grass seed prevent the grass seed from germinating?
1
Only the lowest branches of my Pine tree is turning brown and their needles are falling off: why it happened and how to avoid it
2
Large Cedar tree with brown needles