Should I start seeds early indoors in my zone?

I am a pretty new gardener, this would be my second year. This year I tried starting a lot of hot peppers and eggplants, a lot of the peppers died before showing the first true leaves, lot of eggplants survived, but they are growing really slow, only the tomatoes seem like they are growing well.

I was wondering if it's because I started too early. But I did some googling and saw that for peppers and eggplants they should be started 8 weeks before the last front and I started them probably 2-3 weeks before last frost.

My main concern is that while some days it's nice and warm above 70f/20c, there are still days that it's below 50f/10c during the day and can reach 40f/5c at night, and this is after the last frost (spring is starting tomorrow).

The seedlings go outside under direct sunlight during the day (unless its a very hot day and I move them under the partial shade of a tree after a few hours, or if it's cold outside or too windy I keep them close to a window indoors).

During the night I keep them inside. The temp in the house rarely goes below 60f/15c, unless it was a really cold day and I wasn't home with the fireplace burning, then it could reach 50f/10c. I give them all the same amount of water and light at the same time and protect them from the wind.

I tried two starting methods, paper towel and then moving them to litte 330c pots, and soil cubes. Didn't seem to make any difference.

This is the climate where I live. 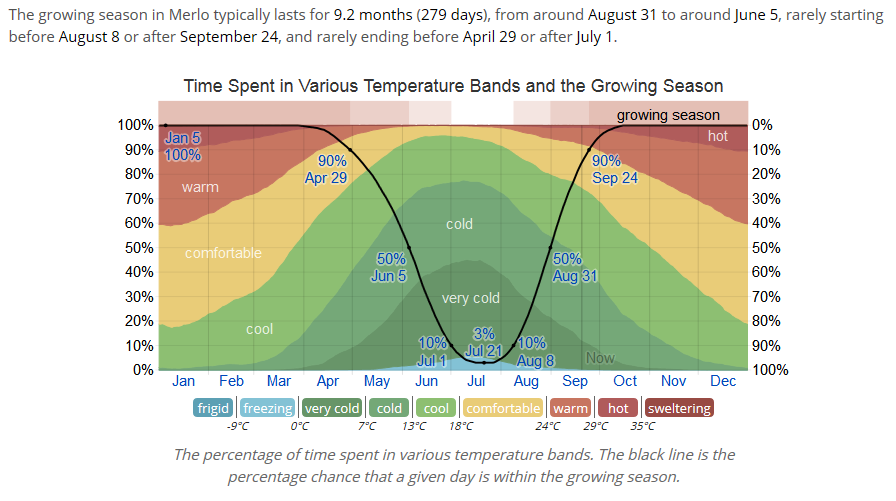 This is the soil temperature for the last few days, I am monitoring them to see when it would be good to sow some zucchinis directly outside. The temperature probe is buried about 2-2.5cms, received direct sunlight until probably 1PM then partial shade.

I feel like since I don't have a place with constant optimal temperature for seedlings (I only have an incubator for germinating seeds) and considering the growing season here is pretty long, I would do better starting the seeds later than I am doing it. Like when temps are more stable above 50f/10c.

Should I ignore the suggested starting dates I find online and wait for good stable weather or is it something else I am doing wrong that's killed my seedlings?

Okay so you mention tomato, pepper, eggplant and zucchini. Your observations are consistent with a lack of supplemental heat - tomato will struggle along and make progress even with cooler temperatures but the peppers and eggplant will need to be kept toasty warm like 20c. The seed sowing recommendations will assume that you can provide the supplemental heat until the warm weather arrives. If the heat is not there then they will not do well and will be subject to a lot of things going wrong which would not happen if they were warm and growing fast. If you cannot keep them consistently warm, particularly at night, then your best bet is either to buy ready grown plants or choose seeds that offer a short period between sowing and harvest, then sow later than recommended.

Zucchini does well sown outside, but wait until the overnight temperature reaches at least 10c minimum in a moving average and plant in a hill to ensure the roots are well drained.

Not the answer you're looking for? Browse other questions tagged indoors germination seedlings temperature or ask your own question.

2
Can My Seedlings Be Saved?
3
Hardening off cucumbers - will they be OK in 50ºF (10ºC)?
2
Why are my jalapeno seedlings turning yellow?
4
How to prepare plants to move to greenhouse from indoors?
4
Avocados from seed - inside house or polytunnel during germination?
8
Is using tomato slices really viable for starting seedlings?
2
Watermelon plants not growing
1
Do plants germinated in heated bed need special care after emergence?