Tomato plants got black stems and the leaves dry out

I was so proud of my tomato plants (grown from seeds), but now I'm worried that they have died...

Instead of having a usual French summer (with 30 C at least and dry weather) it is raining a lot and it is cold (18-20 C). Up to now (until last week or so) I was not worried because the tomatoes did well, a lot of flowers and some fruits were appearing. Then suddenly the stems became black, not only black dots and yellow leaves as described here but real areas. In addition the leaves have dried out.

Is there anything I can do? If not, what could I have done to avoid this situation beforehand? ("In gardening there is always a next year") 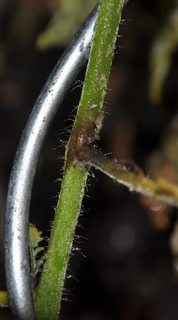 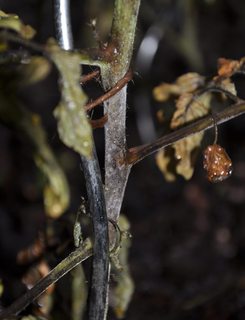 It's very sad that the list of things that attack tomatoes is so long. This could be the Didymella stem rot fungus.

It's likely you do not have access to the controlled fungicides that greenhouse growers use so control is either cutting off the diseased areas or lifting and destroying severely diseased plants.

Why your plants get infected is a longer term issue that is tied is with having a source of infection (usually dormant spores in the soil) and the right conditions (plant stress + cold + wet).

Some ideas for control:

Regardless of which species of fungus it is, a helpful preventative is to mulch your plants. Mulch reduces splash-up of fungal spores from the ground onto the stem and leaves, by absorbing the force of raindrops as they hit the ground.

Use mulch sparingly until plants are well-established - it can harbor insects that will go after seedlings.

Not the answer you're looking for? Browse other questions tagged diagnosis tomatoes or ask your own question.

14
Why have my tomato leaves started yellowing at the base?
6
Small tomato plants have purplish stems

16
My indoor plant has an orange mold-like substance growing on it and has tiny white bugs. How can I remove it?
3
My plants are dropping leaves suddenly and dying. Are they being poisoned?
8
cultivating a cactus from cutting
6
Small tomato plants have purplish stems
16
Sudden Outbreak of Yellow Leaves on Tomato (and Other) Plants
8
Why does my mint have dry, brown or black leaves and stems that are falling over?
13
Tillandsia (air plants) Turning Black and Dying After Watering
3
Lower stems on tomato plants turning brown
1
Tomato seedlings dry off after planting out