How (and when) should I prune a grape vine that's mainly for shade?

I have a vine growing up my porch, mainly ornamental/for shade in summer and a windbreak in autumn. I did get some grapes last year (a little sharp and pippy, but tasty) but my climate is marginal for them to ripen especially given that it gets quite a lot of shade. Any edible grapes are a bonus, and I've been known to stuff a few leaves as well. The vine has been in the ground about 3 years, and this summer's growth was quite prolific; I need to do something to keep it manageable. Last year I just trimmed it a bit, without too much thought. All the guidance I've seen online has been about pruning for cropping.

Should I cut it back hard? Will this keep plenty of leaves low down? Will it grow back nicely if I cut back to old wood, or must I leave some green? What time of year is best to prune?

Cut the vines you don't want. I had a 10 X 10 ft roof lattice in front of a door with a Concord type grape. After a couple years with pruning for fruit, it made a jungle and went a distance onto the roof . I needed very aggressive pruning . Also the bees and then dropping unpicked fruit made it more of a nuisance . The time to prune is when your shears are sharp if your primary goal is not grapes

Pruning grape vines correctly and timely is important for maintaining optimal growth. Grave vines should be pruned when dormant, in the winter, before the spring.

If your grape vine is healthy there shouldn't be a problem with pruning it back to the main stem(s). I should grow back with a vengeance as soon as spring kicks in.

A key word in your question statement is "prolific" - this would indicate that the root system is well established and we do not need to be careful about pruning top growth.

The important thing now is to establish a basic framework which will ensure that a limited number of main shoots can be extended to give shade where required. A good system to follow would be the example of the guys who used to grow grapes under glass, where the goal was to fill the greenhouse with vines, but not so much that it became wasteful growth. 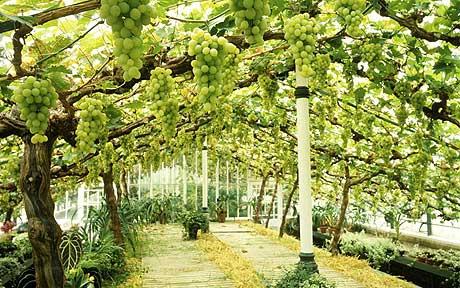 Here are some grapes at Chatsworth House.

So the basic framework will be a system of branches which forms the permanent structure. Each spring you prune back hard to the framework, then allow a single main shoot to expand to cover its share of the space. When the main shoot sends out side shoots these will need to be pinched back. So there are two prunings, one severe in early spring, and then continual summer pruning. It is this latter pruning that reduces the amount of leaf area that will keep the root system from becoming too vigorous and restricting the shade to the amount you want.

Now that the vine root is established you do not need to worry about pruning hard, however if leaves are needed down low then you will need to make sure that there is a branch of the framework that provides a growing point (a viable last year's bud) at that height.

Not the answer you're looking for? Browse other questions tagged grape-vine or ask your own question.