What is this plant grown from a pack of annual seeds (UK)?

I sowed a pack of annual seeds in the flower patch this summer, but the pack did not name the flowers included and I am wondering if anyone can identify what this plant is: 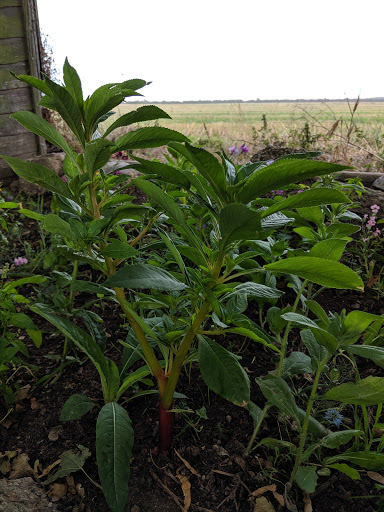 This is Impatiens balsamina or Balsam impatiens. The stems are quite soft and almost translucent, can grow to about 2 feet tall and the leaves can be quite long and strap like. They can take quite a few weeks to come into flower from seed, so if you sowed the seeds direct into the garden say at the end of June then they should be coming into flower any time now. Patience, still a few weeks before frost, and you can take cuttings which will root in water easily. Normally this type of annual would be sowed early and transplanted into the garden for a long flowering period.

I also think it might be Impatiens glandulifera (Himalayan Balsam), but I'd be very surprised if it was present in a packet of wildlfower seeds. Although they are obviously wild flowers, they are considered pernicious weeds in the UK, invading river and canal banks, waste ground and gardens widely, and they would not normally be part of a wildflower mix.

If/when it flowers, which would confirm/deny whether it's Himalayan balsam, if it definitely is that, I suggest you remove it immediately, before it sets seed, see here https://www.rhs.org.uk/advice/profile?pid=480

7
How do I collect annual Dahlia seeds?
8
What is this annual weed with square stems and purple bracts?
4
What is the name of this fat-stemmed plant?
4
What is this plant from a package of mixed flower seeds?
4
What do globe amaranth seeds look like, and can I harvest them from dried flowers?
4
What are these trailing plants with white flowers?
2
Is this an annual?
3
what is this pink flower?
1
Plant Identification: plant from mint seeds