Can I Save My Purple, Skinny, Lopsided Cactus?

I am a person who recently got a cactus from a previous owner (used as a decorative piece in a restaurant), and I also have 0 experience gardening. Some searches on stackexchange and elsewhere seem to tell me it's in rough shape, and I was wondering if (and how) I could mitigate these issues. If anyone else happens to know the breed it would be helpful as well.

First off, the cactus quickly becomes quite deformed and skinny, and it has severely grown to one side since I first saw it a year ago: 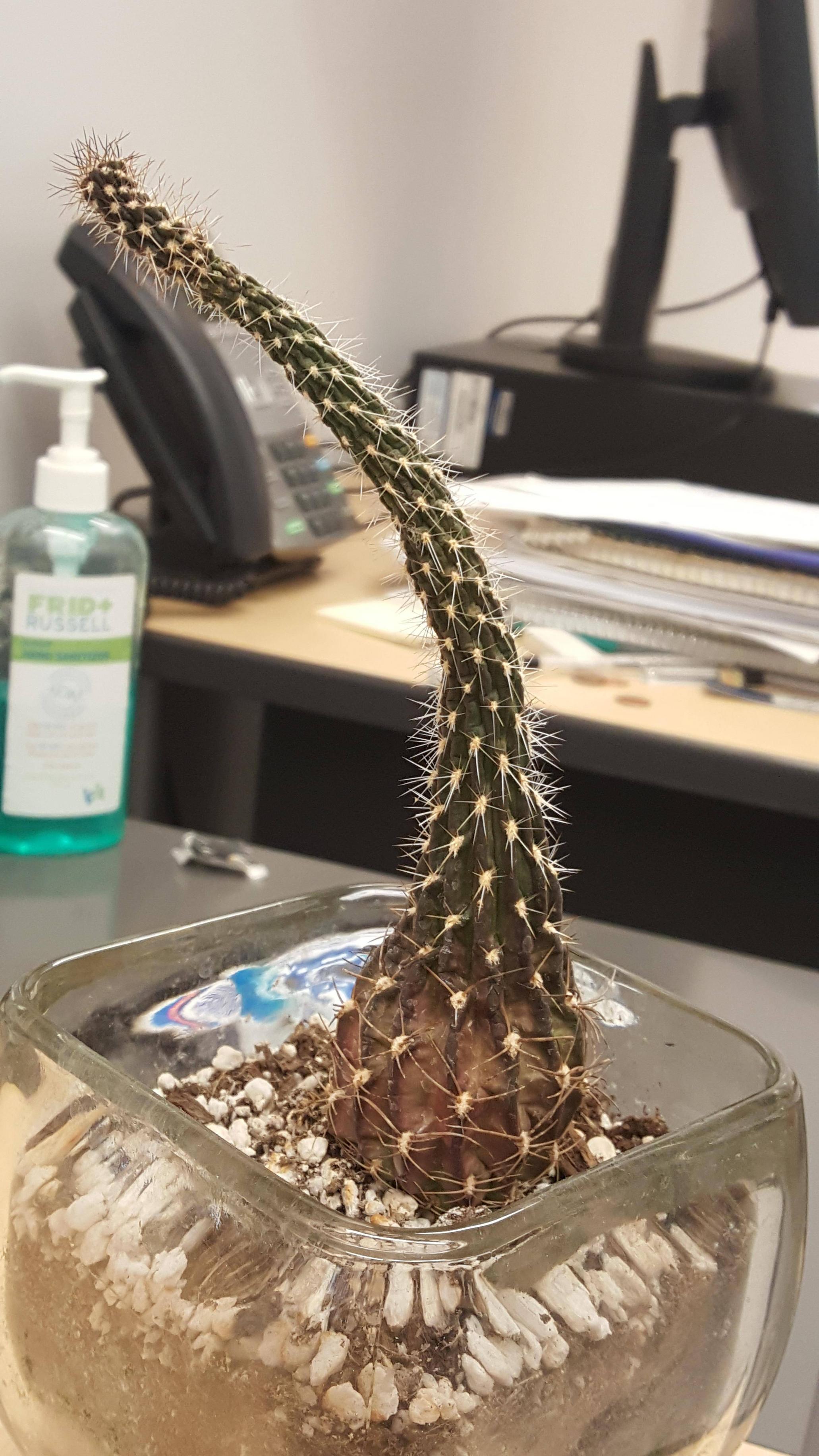 I am under the impression that the bending is a phototropic response, and so can be corrected.

The bending is on the same side as a waxy purple splotch. Similar posts on this site have led me to believe it's being undernourished, overwatered, or sunburned. The previous owners were informally waiting for it to die, I don't know if it's been watered in months. 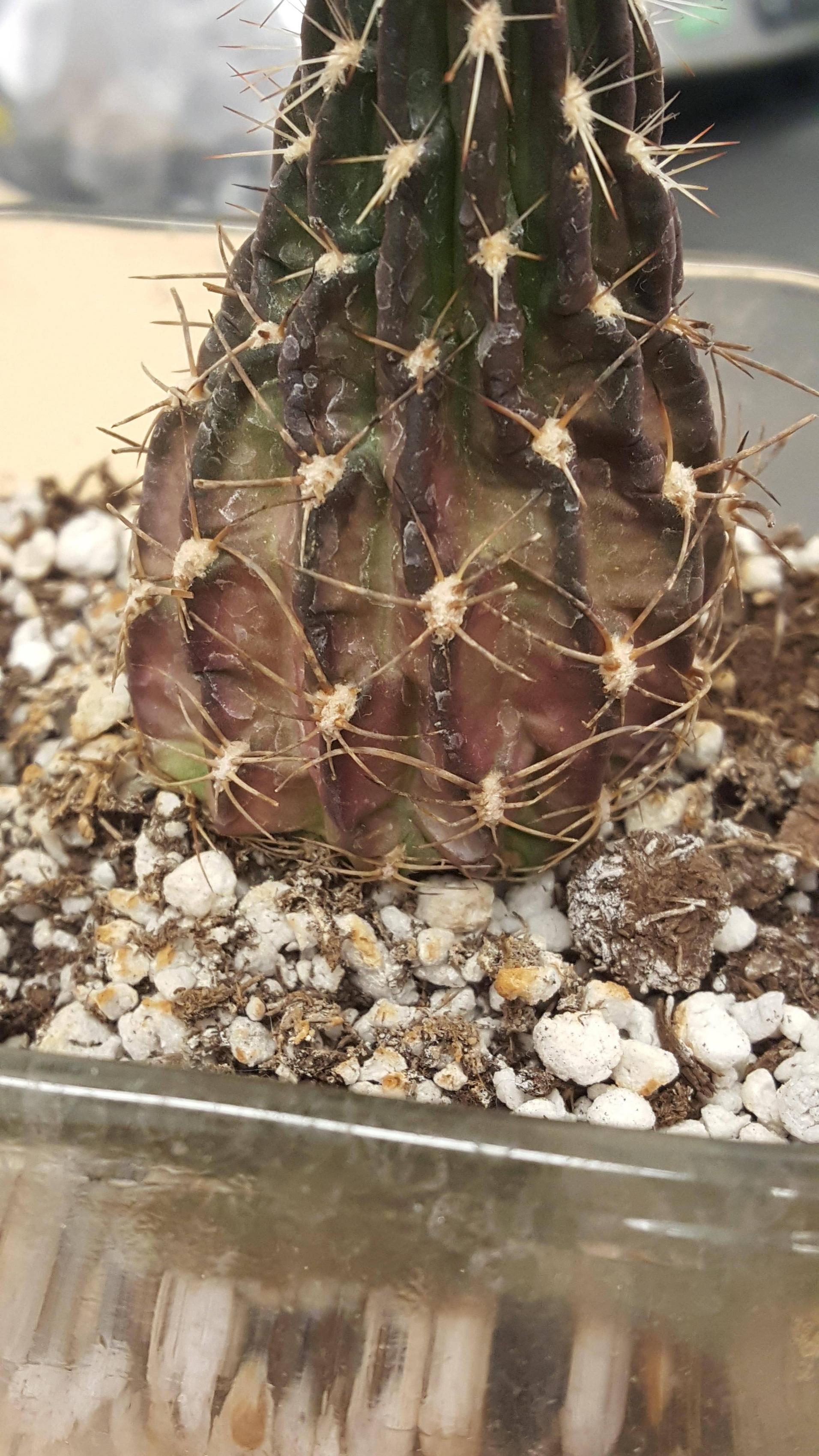 This is one of the things I am most concerned about if it will lead to the cactus dying if its diseased or something.

Furthermore, the glass I got it in seems to be covered in a green splotches, and I don't know if this is the glass or if something on the plant is dying and causing this and it's just visible from the places I am seeing the plant. 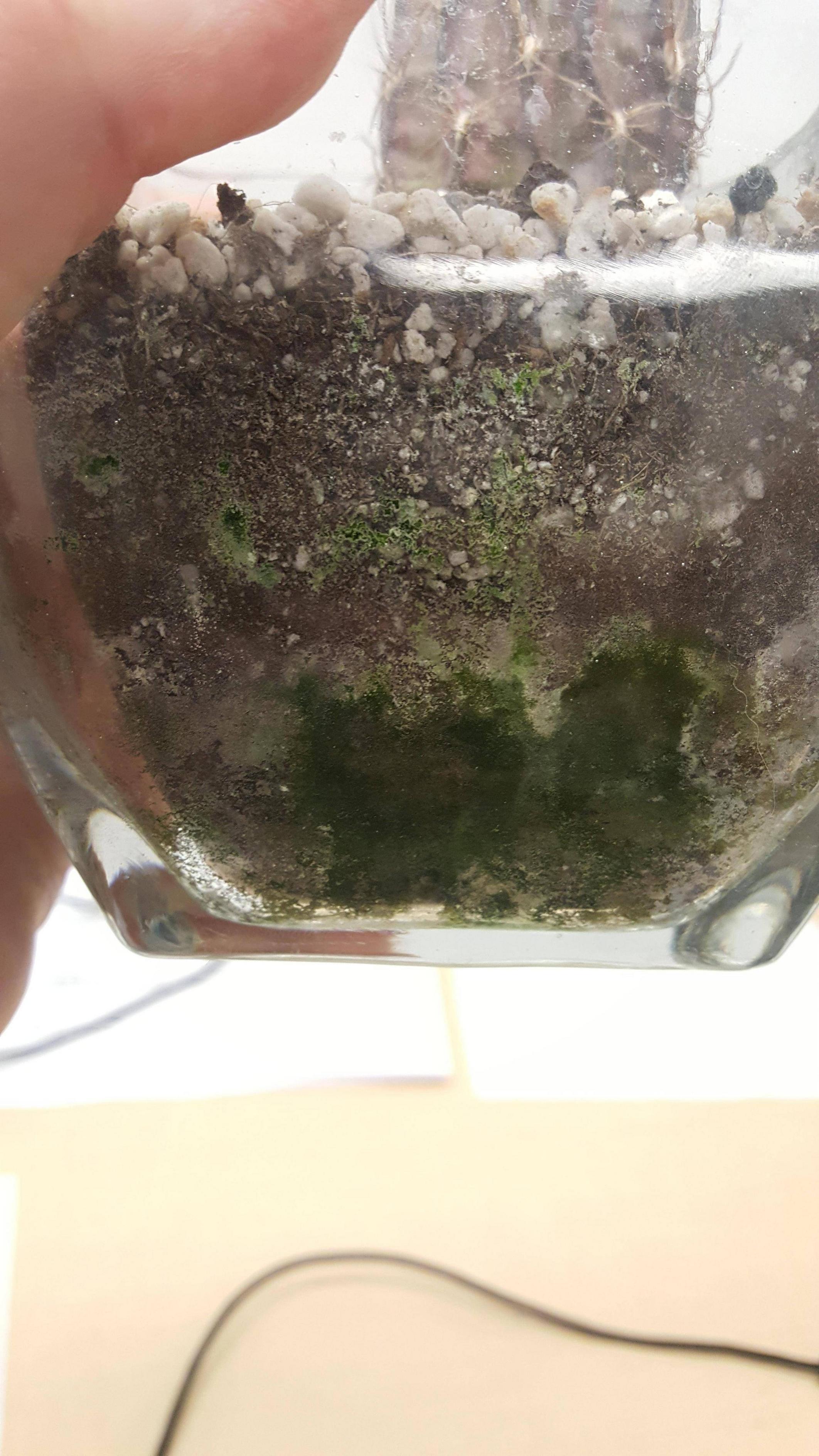 The last concern about saving it, is that it seems to be growing wider again in the past few months (before I owned it) and I am concerned that there are going to be structural failures if I can resuscitate it. 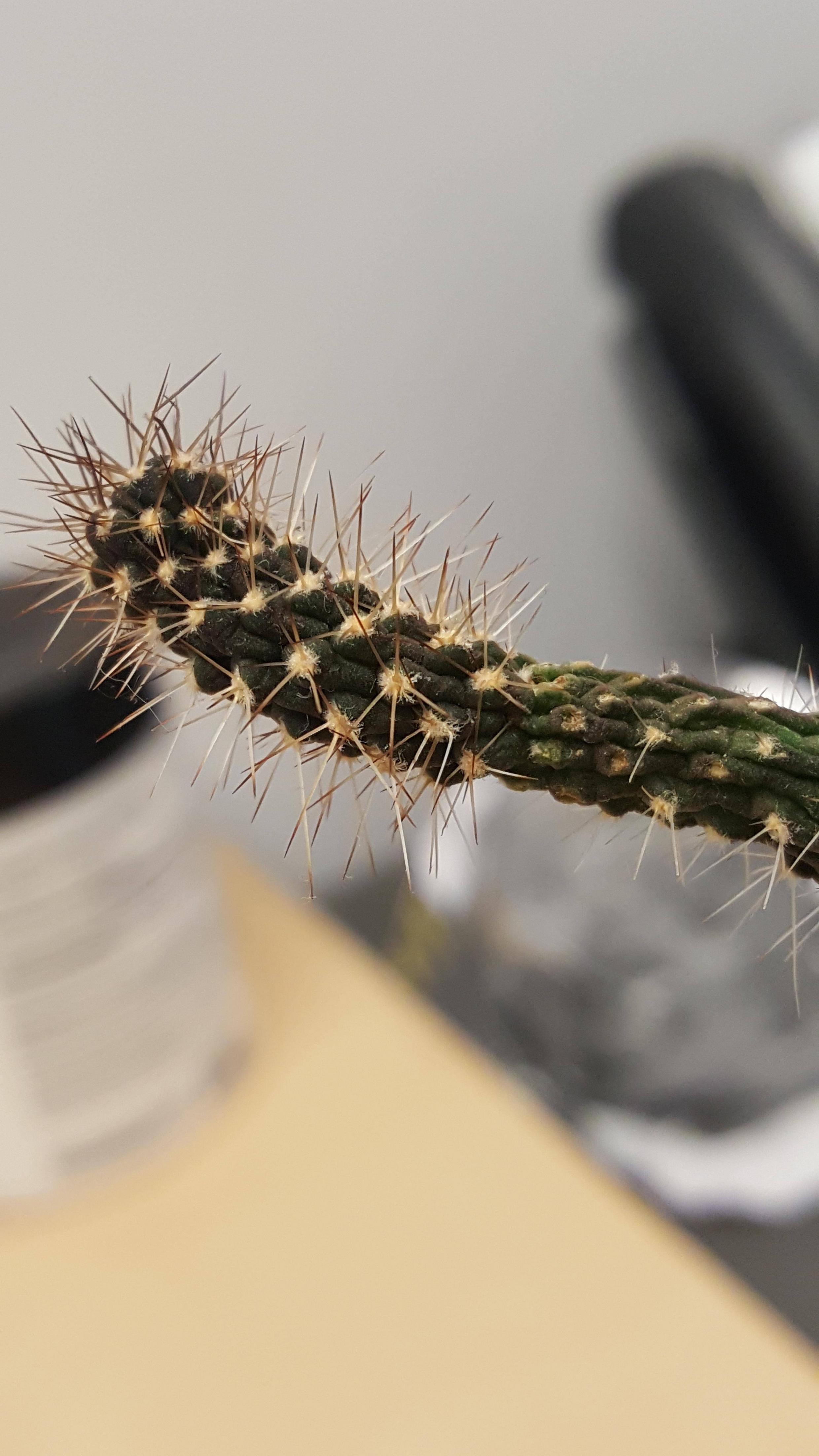 In summary, I was wondering what this critter is and if there is a way to save it (if it needs saving)?

This plant has many issues. It's surprising it's still alive, to be honest. The plant is so deformed it would be difficult to determine the species.

First problem, it appears to be in a glass "pot" with no drainage. Cactus don't like to sit in old, stinky water (see mold and moss throughout the soil). Very few plants like light on their roots. So effectively this "pot" has half the useful volume it appears to. Roots won't grow into the light.

It also appears to be very dry. I'd recommend watering it, but that would probably make things worse if it stays in that pot.

You are correct, the bending is due to phototropism. The extreme thinness is called etiolation and is also a symptom of phototropism. There really isn't any "solution" to this issue. You could cut the healthiest portion off the top and attempt to root it. But, it will never look like a normal plant. Even the top portion has been distorted by it's treatment.

If you did manage to get part of it to root and treated it well for a couple of years, you might get some offsets or new branches that look normal. You could then cut those off and root them. Buying a new plant would be a simpler and more satisfying solution. If left alone and provided with better conditions, you're right, the plant would break or fall over.

The redness is not likely due to sunburn, it's probably just good old stress. Cactus can be stressed to too much or too little sun, bad soil, temperature extremes, insects, pathogens, etc, etc. That is one unhappy cactus.

This is horrible. No living thing should be abused like this. I know you aren't responsible for this treatment, but it's horrible to see.

17
Japanese box hedge failing to thrive. What to do?
10
Why is my cactus purple?
4
How to save this blue cactus?
8
Why is my cactus turning purple and pale?
2
Frostbitten cactus, turning yellow and black, can it recover?
1
can I save my cactus?
3
Why is my cactus’ arms growing skinny like this?
3
Can I revive my poor cactus?