Are there any disadvantages to using a Tree watering spike?

I've been racking my brain about a recent remodel of our irrigation system in a certain zone that has 2 large fig trees in the middle of a section of grass.

The main trunk of each tree is around 6-8 inches wide. They both stand around 10 to 12 feet high. The trees are doing great and give off plenty of fruit. 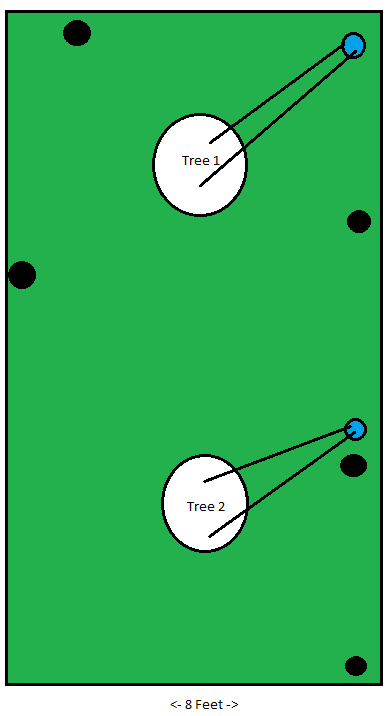 Currently, each drip system head can push 2 gal/minute. I've 2 ran lines from each head directly to the tree trunk, and the last 2 are turned off. So each tree is getting 1 gal/minute.

The lines running to each trunk are placed at the surface level on top of the soil and each tree trunk has a brick barricade so the water doesn't runoff. That's probably a 3 foot circle of brick.

After doing a lot more search in the last week. I released I have been watering these trees all wrong. And the evidence of it kind of shows. I should have been giving them water once 2-4 weeks, instead of 5-7 gals 3 times a week. I can visually see the roots on top of the soil OR maybe 1 foot to 6 inches below the soil. There maybe way more far deeper below, I just don't know. In the past, the trees were only getting water from the sprinkler system and getting water manually. As of last year, I installed the drip system to put water directly into the trees, so it was getting water at a much more consistent rate.

Now i'm thinking about using tree spikes so the water could go much deeper, instead of just being on the surface level and draining down toward the middle of the tree. So hopefully the roots can push down deeper instead of depending on just surface level water.

I'm aware I might be too late because the trees are around 10 years old now. But I have this current system with many other trees in the back yard, much younger trees. Which I could re-do the irrigation setup and install these spikes to push water further down. The other trees in the backyard, don't have grass surrounding them, they are in (in-ground) 5 foot round planter concrete enclosures that were placed when the house was built.

What do you guys think about these tree spikes? Are they a bad idea? Do they work as intended? Are they only intended for manually watering? OR can I place a 1/4 inch drip system line into 1 of them to push water down?

My large fig tree has many surface roots that compete very well with the grass and weeds under it. Actually I am due to chop out a few roots because they are almost a hazard for the mower. I can't imagine that a tree watering spike would be needed. Figs do love water, we have about 48" of rain and sprinklers when needed. Mine is a cultivar , Anna ,as I remember.

Fig trees are Mediterranean trees, so the survive with long periods of dry. They also growth on rocky soil. In my experience, roots are delicate, and they rot often. On soil the water do also a screen to oxygen, so it will ruin the soil (and the undersoil live).

I'm not sure about your methods. I would recommend your previous methods for lawn, but every few weeks you give much more water, so that such water will goo deep in soil, where the fig roots are supposed to be. You do no need to inject water on bottom of soil, and with your proposed method, there is a risk you will water only one side. Instead your first method (but modified) will simulate rain. Seldom you have rain which go deep (but remain in the top for few time, so not "ruining" the soil [some plants likes wet soil, but for lawn, usually overwatering is "ruining").

But really, for figs, I think you should do it manually. One/twice per months is not so frequent (assuming no rain). Maybe after you do a BBQ, or your clean your car. It is not a problem if you "overwater" for one hours or so. Just that the topo soil should dry up before you get mosses. [Efficiency tell us: Automatize the very recurring tasks, do manually the seldom tasks]

2
What type of irrigation system works best with blueberries?
4
Combining drip irrigation with small shrub/lawn sprinklers
1
Are there any issues with using an on ground sprinkler system with impact sprinklers?
4
Drip Irrigation for Row of Long Arborvitae Hedge
5
Do I need to change the irrigation for my Shamel Ash trees?
5
Will Irrigation spikes speed up oak tree growth?
2
Soaker hose with a rain barrel
4
Irrigation for elderly family members persimmon tree