Saving a blueberry bush that lost all leaves

Earlier this year I bought a small blueberry bush at a local garden store. Since it was written on the attached note that it can grow in a pot on the balcony without a problem, I bought bigger pot, some recommended soil (I used 'rhododendron soil' with a pH value of 4.6) for it and planted it there. At the time that I bought it in late spring/early summer, it had a surprising amount of branches and berries on it, considering it's size.

Things went well for two months or so, I kept it in a half-sunny spot on my balcony (I live in southern Germany) and watered it carefully with tap water, since I was worried about drowning it. Every two weeks or so I fertilized it with a bit of the general purpose fertilizer I use for all my balcony plants (7% nitrate,3% phosphate,6% potassium oxide, smaller concentrations of other stuff). At some point after these two months I noticed that its leaves had started to get brown, dry spots. I assumed the heatwave at the time to be the cause, so I moved it to a more shady place and watched it's moisture level more carefully. Nonetheless, more and more leaves turned brown and eventually were thrown off.

Since I assumed that lack of water could not be the cause, I was worried about having overwatered it after all, so I took it out of the pot and had a look at the soil and it's roots. While the soil was moist, it didn't seem an alarming extend to me and the roots were alive and firm, large enough in number and with still some space left in the pot for them to expand.

A friend of mine that I often talk about gardening stuff with suggested that the bush simply had too many berries to maintain them all, leading to this situation.
Over the course of the last week all the berries and leaves dried up, I removed them since these seemed a hopeless cause to me.

The stem of the bush still looks green and lively, and cutting one of the outlying branches showed that despite a dry outside, the inside is still firmly green and juicy.

Is there hope for this bush to survive and eventually grow new leaves?
What can I do to help it? 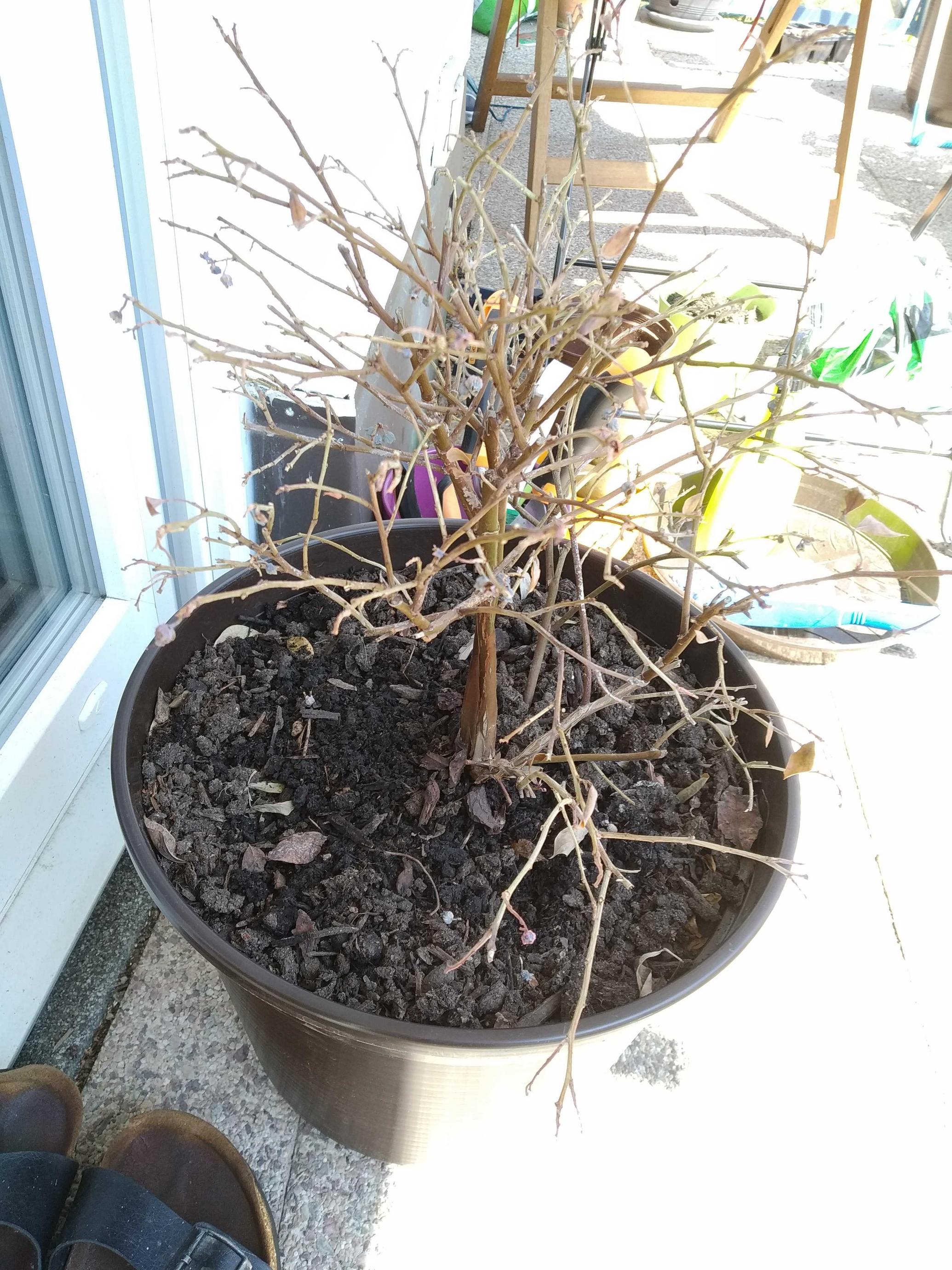 I suspect your water is the problem. Blueberries need acid soil (pH below 5.5). Your "rhododendron soil" was fine at 4.6, but your water is significantly alkaline. The chemistry definition of "neutral" is pH 7.0 but "neutral" garden soil is usually around 6.0.

I would repot the plant in the same "rhododendron soil", getting as much of the old soil off the roots as possible. Ideally, water it with rain water not tap water, or find some suitable bottled water. Different brands of bottled water sold for drinking may have pH anywhere between 5 and 9. The most acidic brands would be ideal, but unfortunately alkaline water tends to "taste better" so is likely to be more common. Deionized or distilled water should have pH 7.0.

Get a soil testing kit to monitor the pH. You can increase the acidity if necessary by adding sulphur. Note: the information on some web sites that Epsom salt (magnesium sulphate) will increase soil acidity is a myth - you want pure sulphur.

You were probably over-feeding the plants. The grow naturally in very poor soil. Use fertilizer formulated for ericaceous plants which will maintain the soil acidity, not general purpose fertilizer.

Thanks for the details on water pH. It looks like the water is the cause of the problem. We have to remember that the pH scale is logarithmic, so the difference between say 7 and 7.5 and 6.5 and 7 is not at all the same. Your water is quite alkaline and this will counter very rapidly any acidic conditions you try to establish with the right soil conditions. There are a number of resources available online about making water more acidic including adding small amounts of vinegar to the water. It might not be too late for this plant; continue your researches and find a water mix your plants might like. Rainwater will probably be better than tap in this case.

Not the answer you're looking for? Browse other questions tagged plant-health leaves shrubs blueberries or ask your own question.

11
Why does my blueberry bush have brown/scorched leaves?
5
Should I transfer a growing potted blueberry bush to a bigger pot, or into the ground?
8
Requirements for successful Blueberry bush planting
5
Blueberry leaves that curl and then brown
6
When to apply amendments to blueberries
10
Blueberry bushes leaves turned red and fell off
4
Ficus lost 80% of leaves over the course of November
5
Blueberry dying leaves, flowers
4
Lemons losing all leaves
0
Nerve plant with curly crunchy leaves