It's been a couple of weeks that I've started to recycle our kitchen scraps (vegetables, fruits, coffee grounds, paper towels) in our garden. I've been reading various instructions over the internet and have tried two slightly different approaches so far. First I buried the scraps some 20cm deep and covered with soil and second I just put the pile on the soil (just a few centimetres into the soil) and covered with some hay. I noticed today that the pile which was not buried, after around 5 days, got some white worms (see red circles in the image).

Just for the record: the weather here is pretty dry and ~30C during day time. The soil is dry as well. The pile is sufficiently exposed to air.

I'm wondering what type of worms these are and if the small white worms are OK in a compost pile? (the tutorials I've seen, all advertise red bigger worms). Also, the pile is a bit smelly, and I feel the thing is rotting rather than going through the (relatively) odourless process of composting as described at various online resources. So, I'm not sure if the process is going in the right direction. 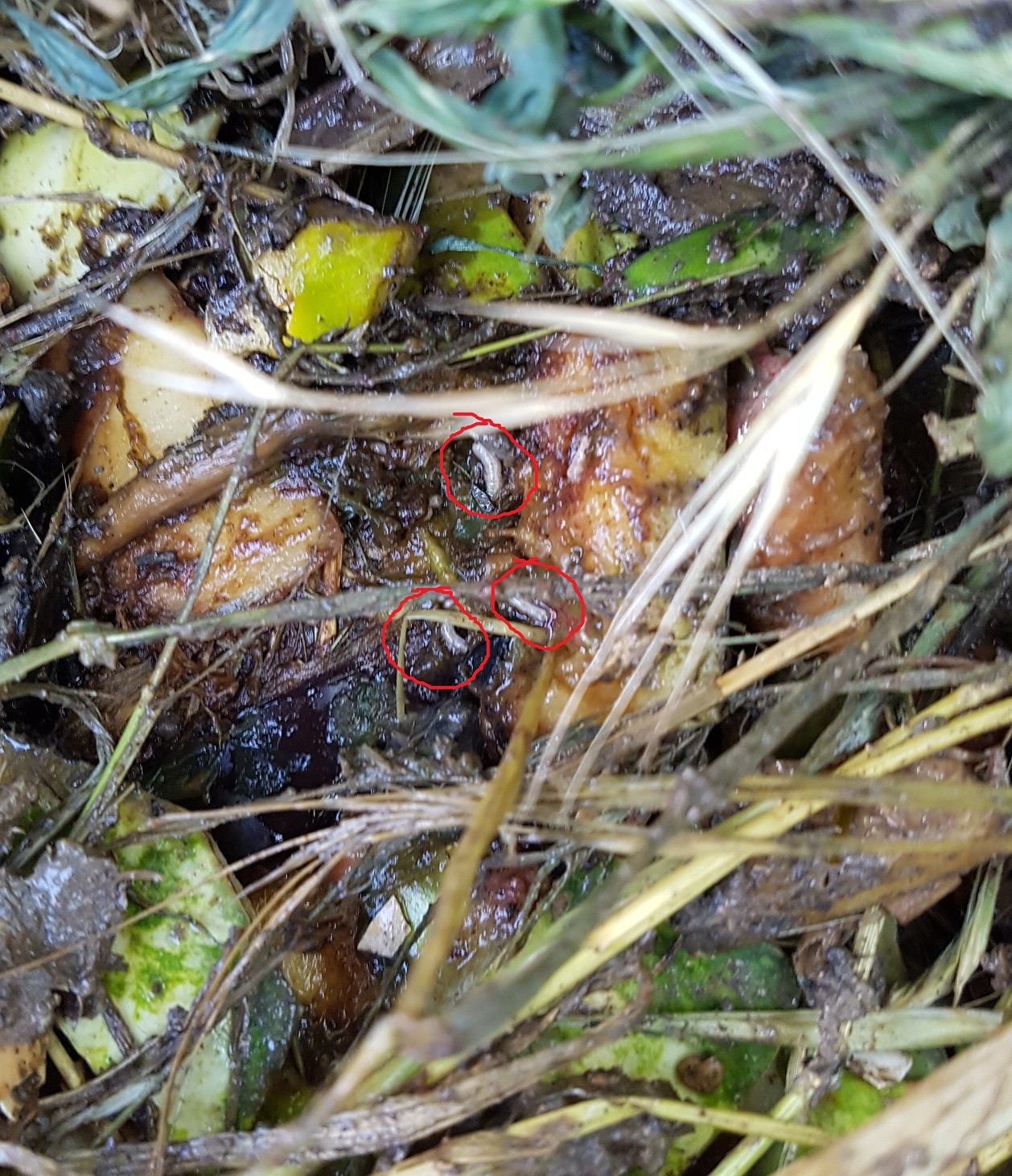 I can't tell if they are maggots rather than worms - flies would be delighted to lay their eggs on that sort of waste laying on the surface, and I'm not surprised it smells.

In a proper compost bin or heap, what keeps it from being smelly is the right mix of greens (Nitrogen) to browns (Carbon). The correct ratio is around 25 to 30 parts carbon to 1 part nitrogen, or roughly two thirds carbon to one third nitrogen. What you've dumped on top of the soil won't contain any browns (carbon) by the sound of it, and when you say kitchen scraps, hopefully that just means things like vegetable and fruit peelings or scraps of vegetative origin, and not meat, fish or other types of scraps.

I am not sure what it is you read on line, but it doesn't seem to be about composting in the way I've mentioned, or as described here http://www.homecompostingmadeeasy.com/carbonnitrogenratio.html. In some countries where people don't have large gardens, kitchen scraps are sometimes buried, or placed inside a long pipe going down into the ground. There is another system for dealing with kitchen scraps which is called Bokashi composting which can be done indoors in a small container, though this method of composting uses fermentation, unlike a compost heap, but after a certain period of time, the contents of the bin will need to be buried below ground.

Not the answer you're looking for? Browse other questions tagged compost worms vermicomposting or ask your own question.

18
How do I keep red wiggler worms alive overwinter in the Northeastern USA?
16
Wormery failure in mass worm die-off ... any advice?
4
How do you attract and keep worms in your garden?
4
How deep to start my vermicomposter and how many worms to start?
2
How to use worm castings indoors?
3
Tiny grey larvae(?) in worm bin leachate
2
White very small worms in the saucer water after watering from bottom
4
Worms stay at corners of the compost bin