My olive tree's leaves have dried out but bottom of trunk is sprouting. What should I do?

I bought an olive tree a few weeks ago. It had new growth and it looked healthy, although I think it was not held in direct sunlight, and when I bought it, it was standing outside - Northern temperatures (Denmark, Europe - similar to zone 7 in the States).

I primarily bought it because I thought it would be a nice plant for my orangery, so I placed it there, where it would get sunlight and warmth.

After few days, I re-potted it in a larger pot and used mediterranean soil, added some fertilizer as well.

Temperatures continued to increase, where there was a period with 25-27 degrees Celsius (77-80 F) outside, and the plant was inside, in almost direct sunlight (only shaded by the ceiling of the building, which is some sort of translucent plastic and permits light to pass). I watered regularly, though not every day for the fear of overwatering.

About 1 week later, the leaves (especially new growth) were starting to dry out. In 1 week more, most leaves dried out and some turned brown. 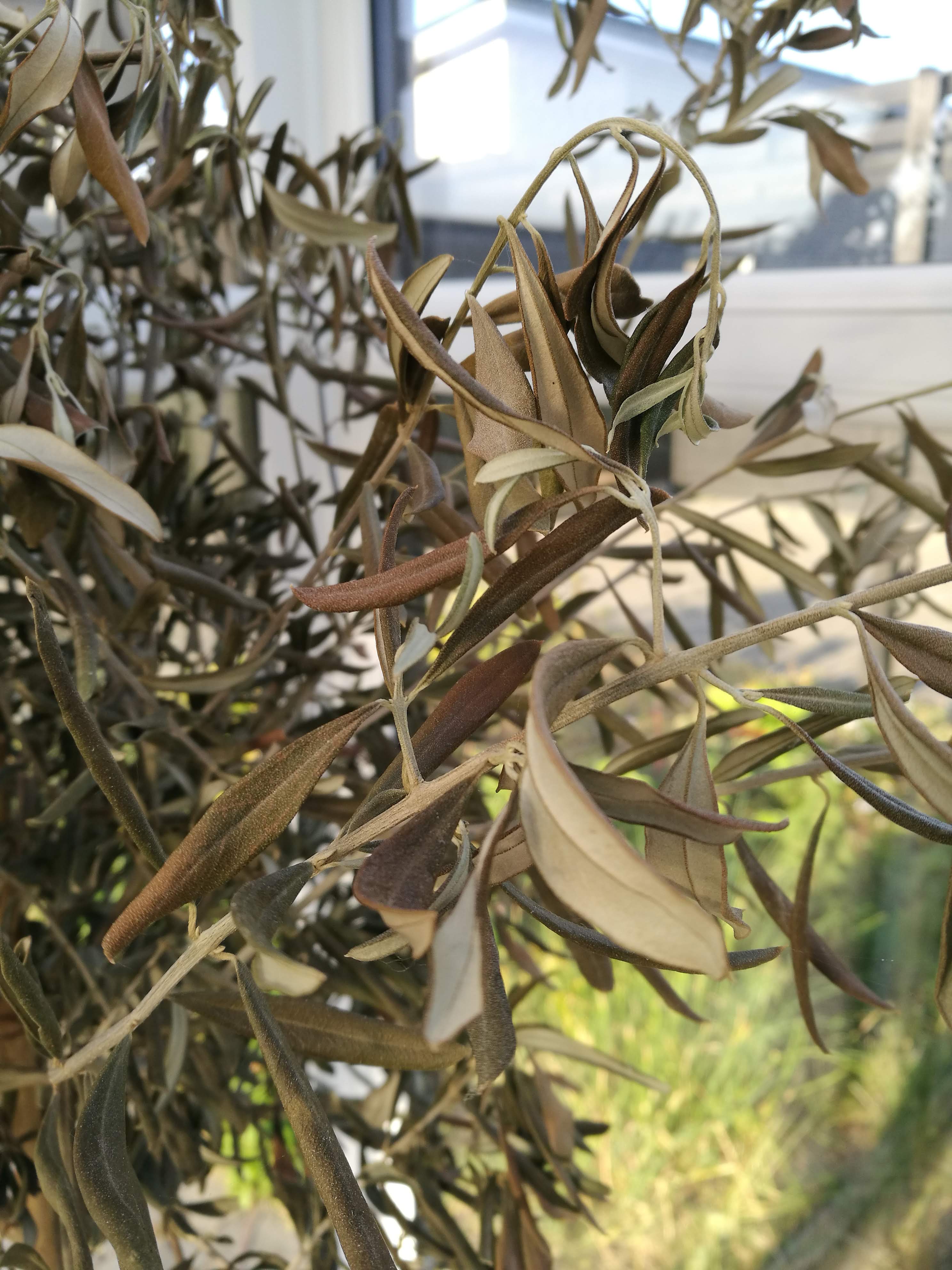 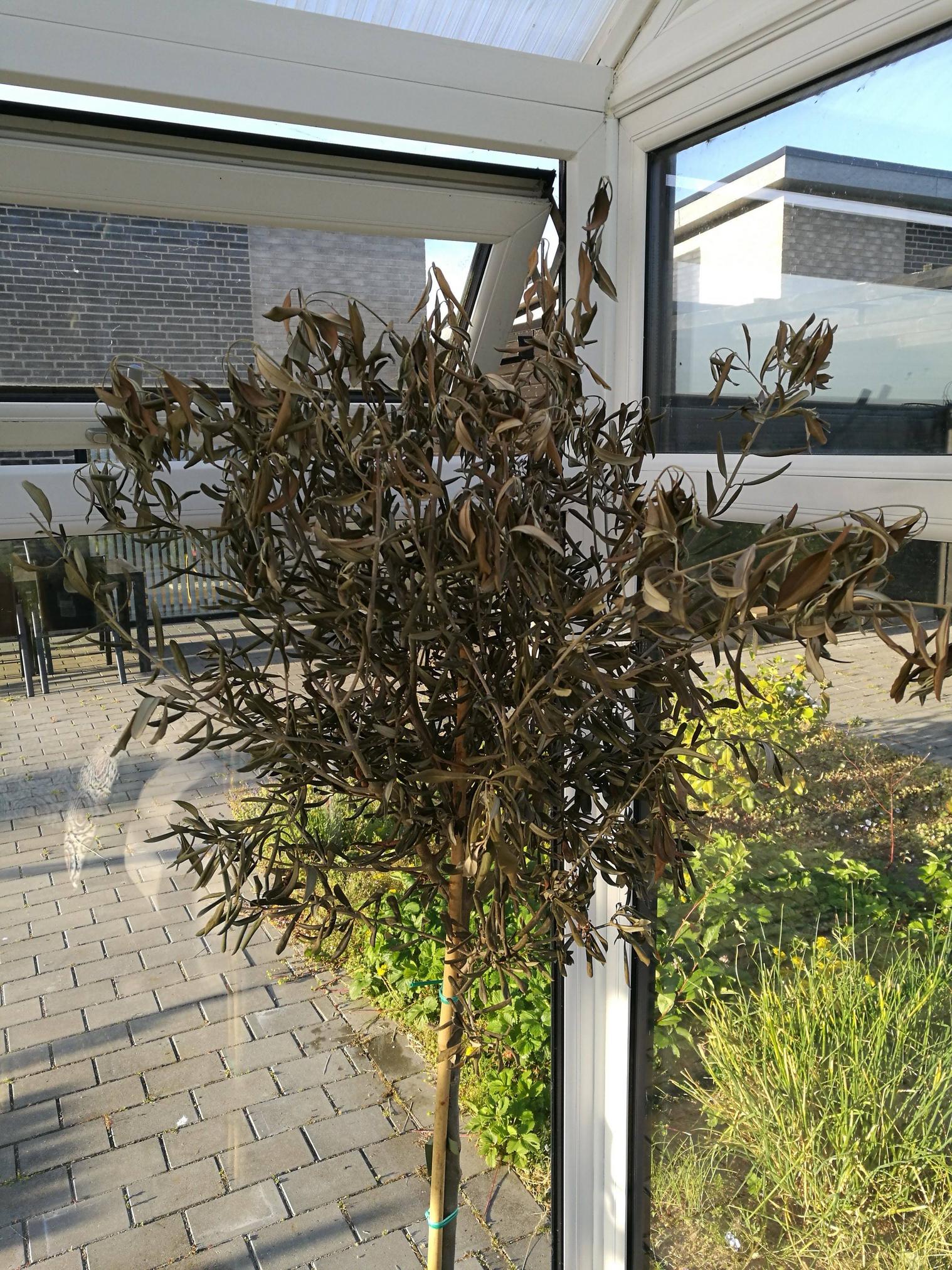 Today I noticed it has sprouted from the buds at the bottom of the trunk, so I was relieved it isn't dead. 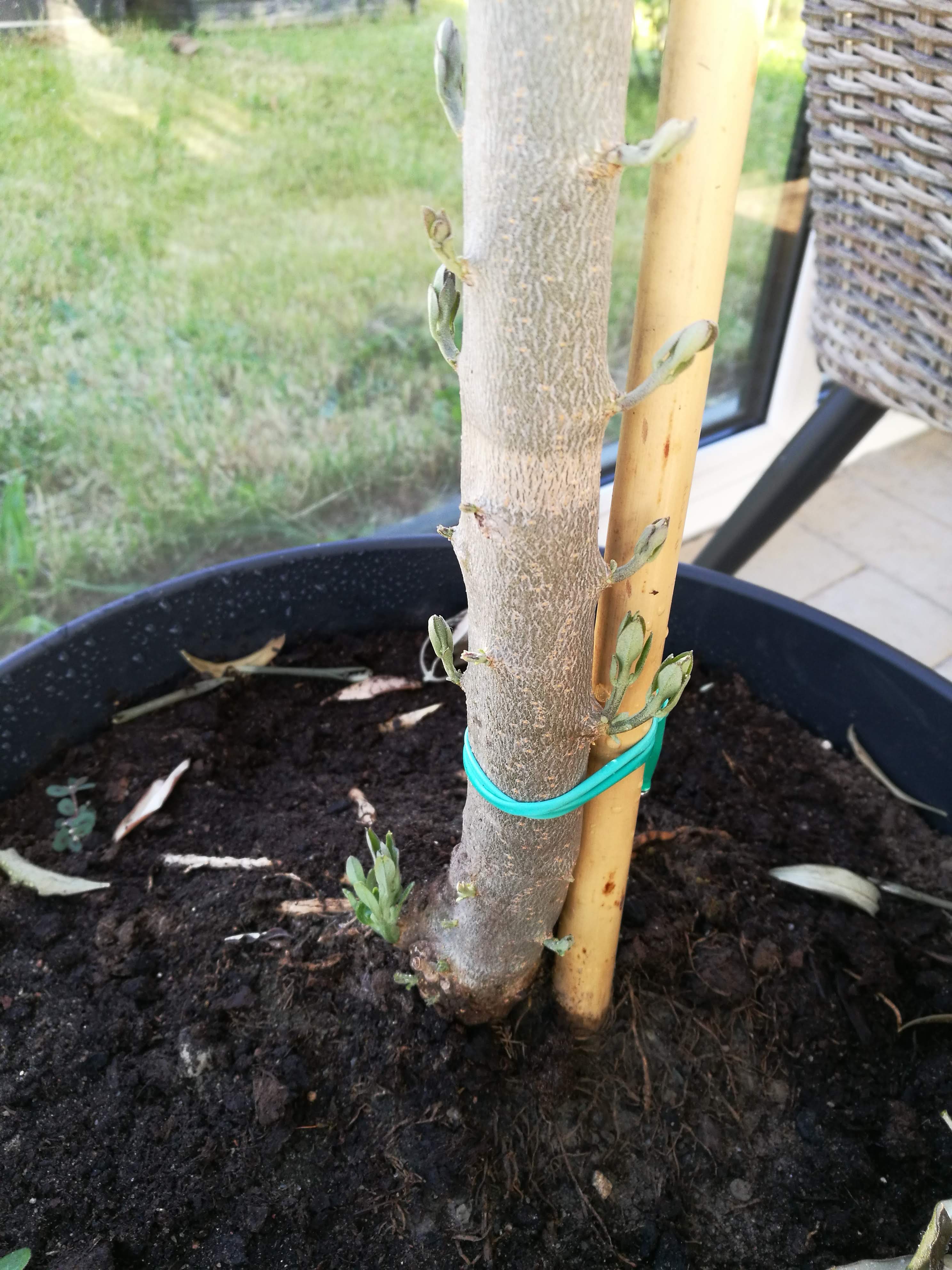 However, all leaves at the top seem dead and dried. I didn't notice any sprouting in the crown. Is there any way to save the branches? Should I remove the sprouts at the bottom, or is that going to kill the tree completely?

If there is no new growth at the top, scrape back a little of the skin or bark with a fingernail on various branches - if they're moist and greenish inside, they're still alive, but if they're dry and brownish, they're dead. If they are dead, the only thing you can do is to remove the top parts completely, and some of the trunk, down to where the new growth has appeared. You will have an olive bush rather than tree for a while, but over time, provided you keep it well watered, it will eventually be possible to train it as a tree again.

If the branches at the top are not dead, they should leaf out again, so remove new shoots lower down on the plant when you notice buds forming higher up. If you do end up cutting it right back, remove the green plastic tie you've used to lash it to the stick - as the trunk widens in girth, that tie will cut into it, and you won't need it anyway, once it starts regrowing as a bush. If you don't cut it down, loosen it a little - it looks somewhat tight.

Although olive trees are known for growing in warm, dry climates, not needing copious amounts of water, that's because they're in the ground. Contained in a pot, it relies totally on you to provide sufficient water because it cannot seek out its own from deeper in the ground. Keep it well watered as necessary, allowing excess to drain away freely from the holes in the bottom of the pot, so water when the surface of the soil in the pot feels just dry to the touch, and water well, using plenty of water. If the plant pot is standing inside an outer tray, empty that out thirty minutes after watering, so it is not left standing in water.

Not the answer you're looking for? Browse other questions tagged watering repotting dryness olive or ask your own question.

6
Which plant is this? “Dead ends,” pruning, watering tips
2
What potted outdoor plant most resembles astroturf in terms of required care
3
How to save a Fern which most leaves have dried out
5
Is a virus, or something else, causing my tomato leaves to become shriveled, yellow and wrinkled?
4
Areca Palm's leaves are drying. What should I do?
1
Help! Areca Palm with dry leaves
1
What is wrong with the small olive tree?
1
What will help a sappling Silver Birch which is struggling after repotting?
1
Edelweiss not doing well, looking for care tips
3
My acer palmatum is drying, what should I do?