Young peach limb bent under load and splintered, can I mend it with a graft? 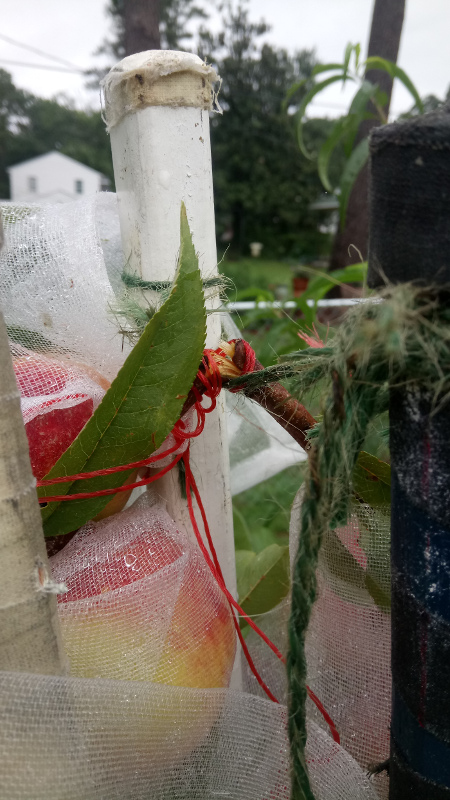 Close up of the splintered limb.. 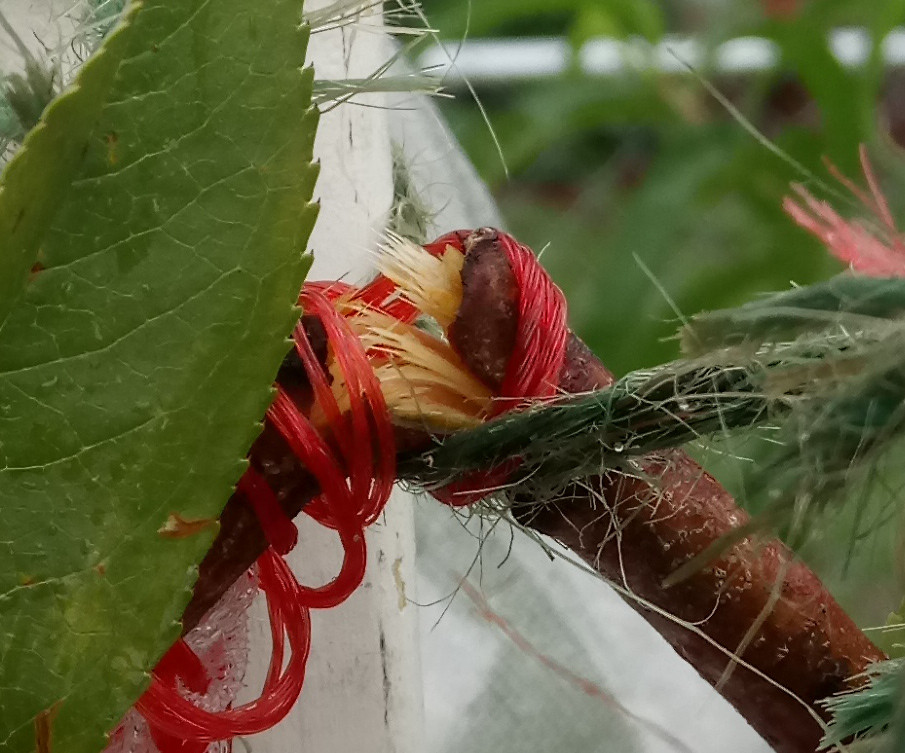 The limb is probably about a half-inch in diameter. You can see that I attempted to prop it up, which was about a week ago. But it apparently bowed enough to snap. I only discovered it this morning. I suspect it happened last night but it's possible it happened as many as two days ago. One of my concerns is time, I don't know how much I have to spare.

This limb has a lot of fruit on it. I'm guessing I two and a half options. 1) Leave it as-is, possibly saving the fruit but losing the limb. 2a) Remove the fruit immediately and attempt to graft and support the limb, saving it. 2b) Same as 2a, only I fail to save the branch..

This tree has only been in the ground two years and this was the first year any fruit approached maturity. This is the thickest, most woody limb on the tree, and also the most productive. So I really hate to lose it. Also, losing it will destroy the shape of the tree.

I'm not simply going to prune it away without trying something. Would a bridge graft like this gentleman demonstrates give it a fighting chance? A major difference between my situation and his video, though, is in my case, assuming I remove all the fruit first, I expect the limb will still be unable to support its own weight. I'm hopeful I can sturdy it up with a couple or three in-line braces made from about 12-18 inch cuts from a strong wire coat hanger. As the bridge graft would leave at least some of the original bark/woody tissue connected, I'm assuming this is my best hope, but I'm concerned about the splintered wood fibers—should I cut those away so there is a smooth "mating surface"?

Alternatively, would it be better to cut the branch cleanly, and attempt a wedge graft? I expect not but maybe someone will argue that it's better.

When I go about the grafting, is there some kind of "adhesive paste" I can apply to the inner portion of the graft to help encourage adhesion, healing, and nutrient flow? If so, since time is of the essence, something I can make at home with common household stuff (honey?) would be ideal.

Finally am I over-thinking this...like, is it possible to let the fruits ripen as-is, then after harvesting it (about two weeks), clean up the wound and graft it back together?

What is my best play, here?

Great question and I think you are probably over thinking it a bit. A broken tree branch doesn't heal exactly like a broken bone but the concept is the same. I do not believe the branch will recover enough this season to support the fruit that has grown on it. However, the branch should recover by next season. It is rather straight forward just push the branch back together as best you can. Then make a splint (as thought your splinting a broken bone), prune it a bit and give it time.

Not the answer you're looking for? Browse other questions tagged fruit-trees grafting damage support or ask your own question.

8
Is it possible to graft fruit/flowering trees onto a well established jacaranda tree?
9
Can I graft a Navel or Valencia orange tree onto an established citrus tree?
6
An evolution in grafting
6
Part of fruit cocktail tree has died
4
Is it possible to graft together a self-pollinating cherry tree?
2
Grafting black walnut onto English walnut
6
Why does the lime half of a grafted tree suffer, while the lemon half thrives?
2
What's causing our pear tree to die off in the summer and thrive in the winter?
0
How many varieties of fruit trees should I attempt to grow as a newbie orchardist?