When to cut roses?

In my garden there some roses that are growing wild. Some of theme are at least two meters high with the flower only visible from down below.

Can I cut them in the summertime? Or is it best to prune them down late winter?

I have an Explorer rose that is almost three meters tall. At one point in time I wanted to get rid of it and dug down to the roots. I used a spade, a saw and eventually, an axe. Despite removing roots as thick as my arm it was impossible to kill. Next year it put on the best flower show ever and I have since learned to love it... at a distance.

The books say prune after flowering is over. If your roses are vigorous you can do no harm by removing dead branches now. After flowering cut one third of the old thick stems off at the ground. Repeat every year and you will be practicing rejuvenation pruning.

I prune the Explorer rose year round. I must take off a bundle of cuttings every three months year round and it invigorates it.

The picture below is what roses with Rosa rugosa parents look like with continual pruning in a sunny site with lots of moisture. 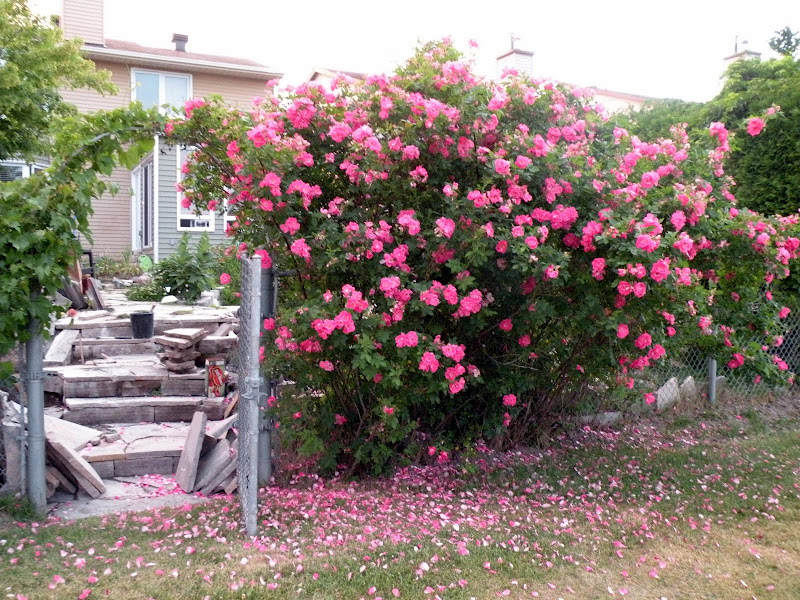 I gave my mother an Explorer Rose "John Cabot' for mother's day, 1993. She lived on the Northumberland coast of Nova Scotia. Even though Mom passed away in 2003, that rose is still going strong to this day ... she whacked off a little of the unruly or dead bits every once in awhile no matter the season and it just keeps on blooming head to toe ... it's about 5 to 6 ft tall and it spread about 12 feet across her deck on the southern side. She never had much water in the well in July and August, so she watered it with her dishwater every day! Amazing .... sorry I don't have a picture but every summer neighbours and especially tourists would turn into her driveway and ask what is the name of that rose and where did you get it? She loved all the attention that rose brought her. It was and still is a beauty. Don't worry about roses too much ... they're like true friends and usually love you no matter what you do to them!

Not the answer you're looking for? Browse other questions tagged flowers pruning roses or ask your own question.

9
Can I encourage my roses to produce more flowers and fewer long stems?
10
How do I grow roses from seed?
8
When is it ok to prune an overgrown apple tree?
5
Why are cut roses doing so much better in a ceramic vase than a crystal vase?
5
Best practices on pruning and winter protection for climbing roses
11
Why should we cover rose plants in the winter?
2
When is the earliest I should put out roses in Illinois?
4
Winterizing young climbing roses
0
How do I preserve a rose bush over the winter?