When I am picking where to place vegetables in my raised garden bed, what is the rule of thumb in terms of the larger, taller plants on what side to avoid them shading the other one's as much as possible.

EDIT: The long side is on the East-West Axis and Width (4 feet) North-south

Unless you have room for the zucchini to wander outside of the raised bed, you may want to forget about them because they'll take an entire bed and then demand more room.

I would probably lay the beds out something like this (plant count is speculative, of course); the drawing is to scale: 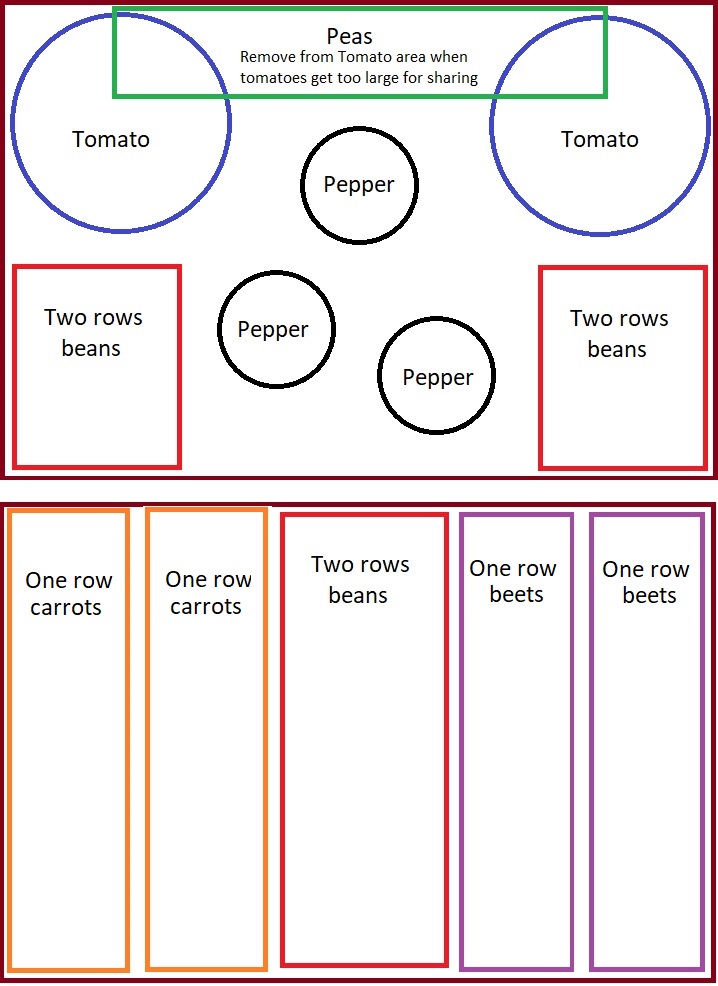 I put the tomatoes and peppers together so that you can rotate them out of one bed into the other every other year to help prevent disease. Disease prevention is also why I spaced them a foot apart - better airflow that way. The peas are on the north side of the bed.

The second bed assumes that you like carrots and beets equally; also, you'll want to eventually space each plant about 3" apart, which leaves you with no more than 16 carrots and 16 beets per row. If you don't need more than that, and if the beans in the first bed are enough for you, then you could maybe put a bush zucchini in 60% of the second bed.

I laid out the root crop rows north-south, which some sources say decreases overall shade on the rows. Other sources say it doesn't matter. If you want to change orientation, then put the beans in the last row, the carrots in the middle, and the beets in front. Note that beans may need support to prevent them from falling into the neighboring crops (mine usually do).

If you want three tomatoes, you could put the tomatoes in the back row of one bed, fronted by four peppers, and the root crops in the second bed. There would probably not be enough room for zucchini, though.

One last thing - mulch the beds!

Not the answer you're looking for? Browse other questions tagged vegetables raised-beds or ask your own question.

28
How should I properly prepare a raised bed vegetable garden?
16
How should I build a raised garden bed?
8
Do I need to/should I till up lawn before putting raised beds on top?
4
What is the optimal raised bed depth for Brassicas?
5
Greenhouse positioning
2
Raised Garden Bed - Catch all support system
0
Raised bed pure horse manure compost
1
First time gardener looking for a critique of my 2020 plan and answers to a several questions that came up in the process!
4
Covering moss for a raised bed garden