What F1 in name of seeds/varieties means?

Quick question: what 'F1' (for example 'Oceano F1' tomato seed) in name of seed exactly means? Are there other designations/markings in use, what is their meaning? Are there other naming conventions (for vegetable, fruit, flowers etc) and how important they are when choosing varieties?

F1 is a term from genetics, it means the first generation from a hybrid. Usually two inbred lines are crossed to get a hybrid, the new hybrid has specific characteristics (usually the best of both parents). If you cross F1 x F1 (so next generation, hence F2), there are chances you don't get exactly the same F1 tomato back (75% chance that a dominant trait reoccurs, and 25% chance for recessive ones). So if you want the same variety of tomatoes next year, don't use seeds produced by these F1 tomatoes, but buy new F1 seeds again.

The accepted answer already explains the meaning of F1 in gardening and seed production. However, it differs slightly from the original meaning in genetics, and also it doesn't explain what the "F" in F1 means; Thus, as a genetics teacher, I'd like to explain it a little further.

As it is well known, Mendel stablished the foundations of modern genetics. In his 1865 paper, Mendel uses the terms "parent plant", "first generation", "second generation" etc...

However, most of the terms used in genetics (including the very word "genetics") were coined by Bateson at the beginning of the 20th century, among them the term F1. And here's it's meaning:

The same way you can have F2, F3, F4 etc. Until today those terms (together with P for parental generation) are used in genetics diagrams, like this: 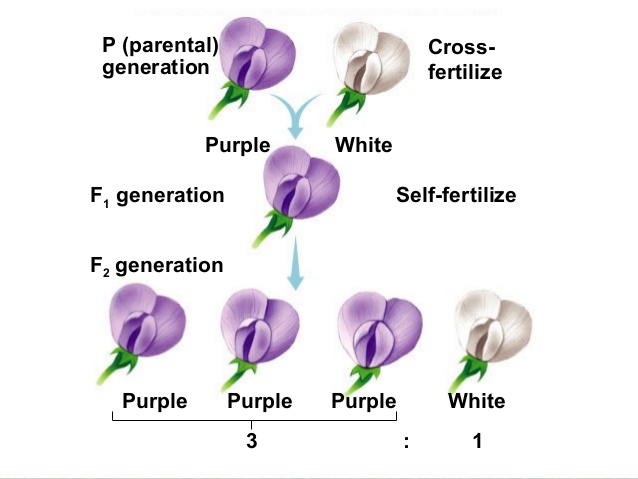 It's worth mentioning that, in genetics, F1 does not mean a hybrid generation. If the P generation is composed by two identical homozygous plants, for instance AA x AA, the offspring, despite not being hybrid, will still be called F1. Therefore in genetics F1 means just that, the first generation (filial one).

Not the answer you're looking for? Browse other questions tagged variety-selection or ask your own question.

3
How can i make watermelon seeds?

16
Why does one of my onion varieties (Red Baron) invariably bolt?
13
French beans (Green beans): Dwarf v. Climbing
16
What are common places to try for alternatives to commercially available seeds?
9
Are 'winter' varieties important when sowing beans & peas in late autumn/fall?
9
What varieties of sweet corn are best for freezing?
9
Are there any varieties of Elephant Ear that are hardy enough to withstand a zone 6b winter?
8
What are some non-sweet white corn varieties?
3
Which walnut varieties are best for eating?
7
Source for apple variety information
0
Perfect trees that doesn't require pruning