Do these watermelon plants show signs of mosaic virus?

I salvaged and planted three watermelon seedlings a few weeks ago after my, somewhat flimsy, greenhouse blew over in a wind storm. The seedlings seemed to be thriving in their new homes, but this past week they have taken a turn for the worse. As can be seen in the following two photos. 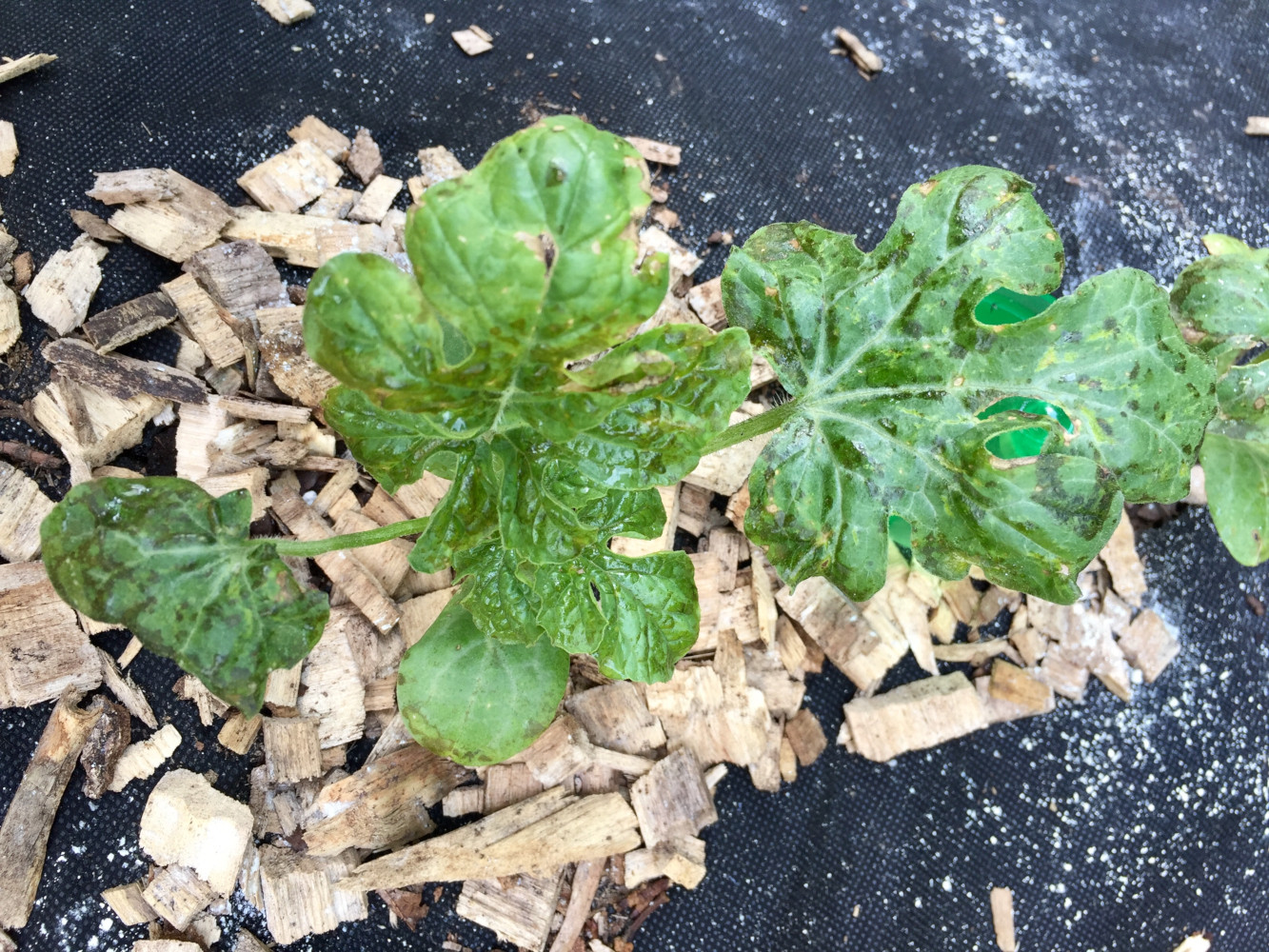 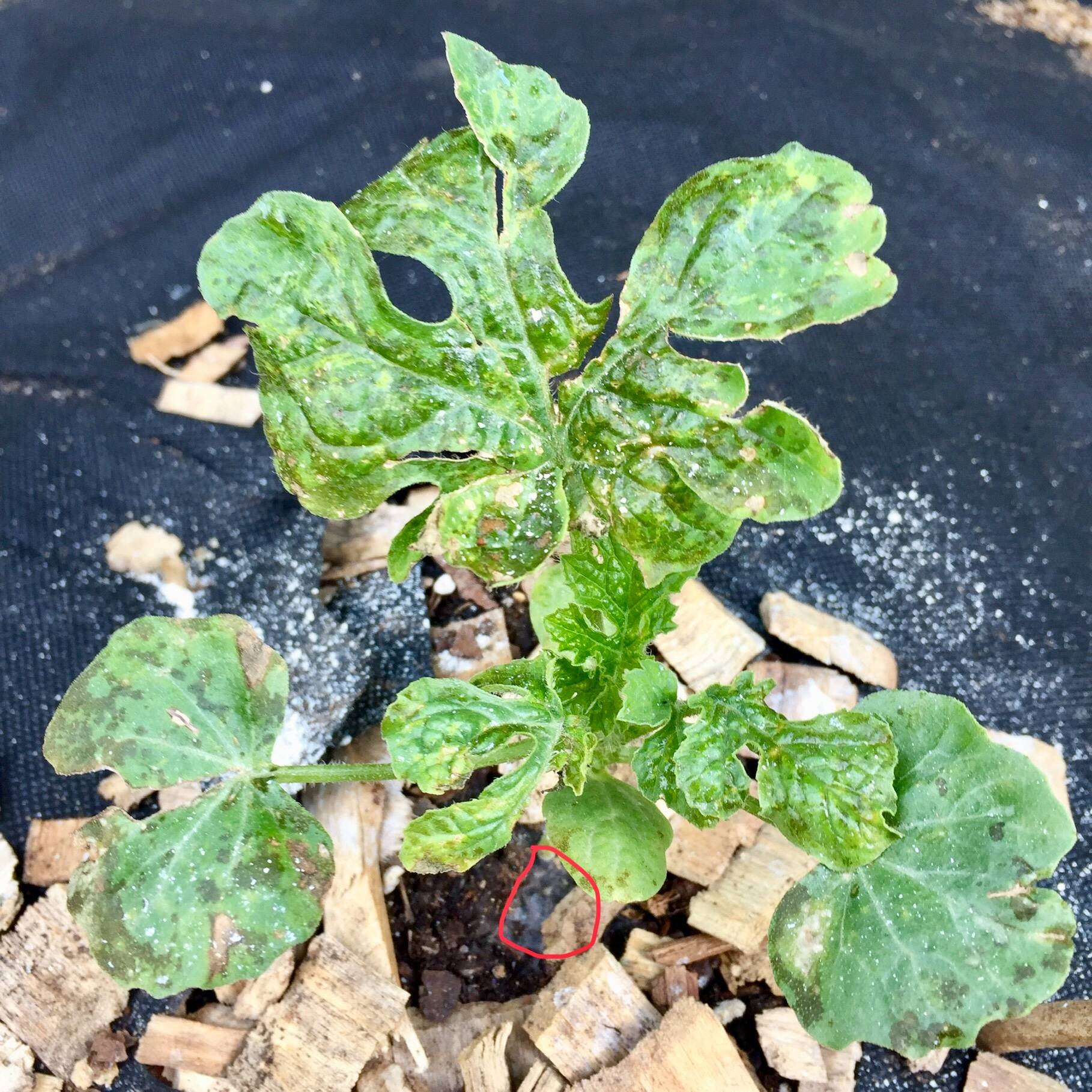 Do the two photos of the watermelon plants show signs of either tobacco mosaic virus or cucumber mosaic virus?

Note that the second photo has a red circle around what appears to be a white soil fungus. This fungus was not present before this morning but is now at the base of two of the three watermelon plants. I'm not sure what this fungus is, but I did notice it on some of my other transplant's peat pots.

But back to the mosaic virus, I've noticed and removed winged aphids and ants carrying aphids on the watermelon plants. I've read that aphids and thrips are big spreaders of mosaic virus. Which is why I have been spraying a watery mixture of Dyna-Gro neem oil and Dr. Bronner's unscented pure-castille liquid soap every seven days, since before the seedlings were transplanted. I've also occasionally used food grade diatomaceous earth to try and curb the ants, I don't want to kill the good insects though.

Also, one of the watermelon plants has a fissure in the stem running from just above the soil to the first set of leaves. As seen in the following photo, which also shows a closer view of the white soil fungus mentioned earlier. 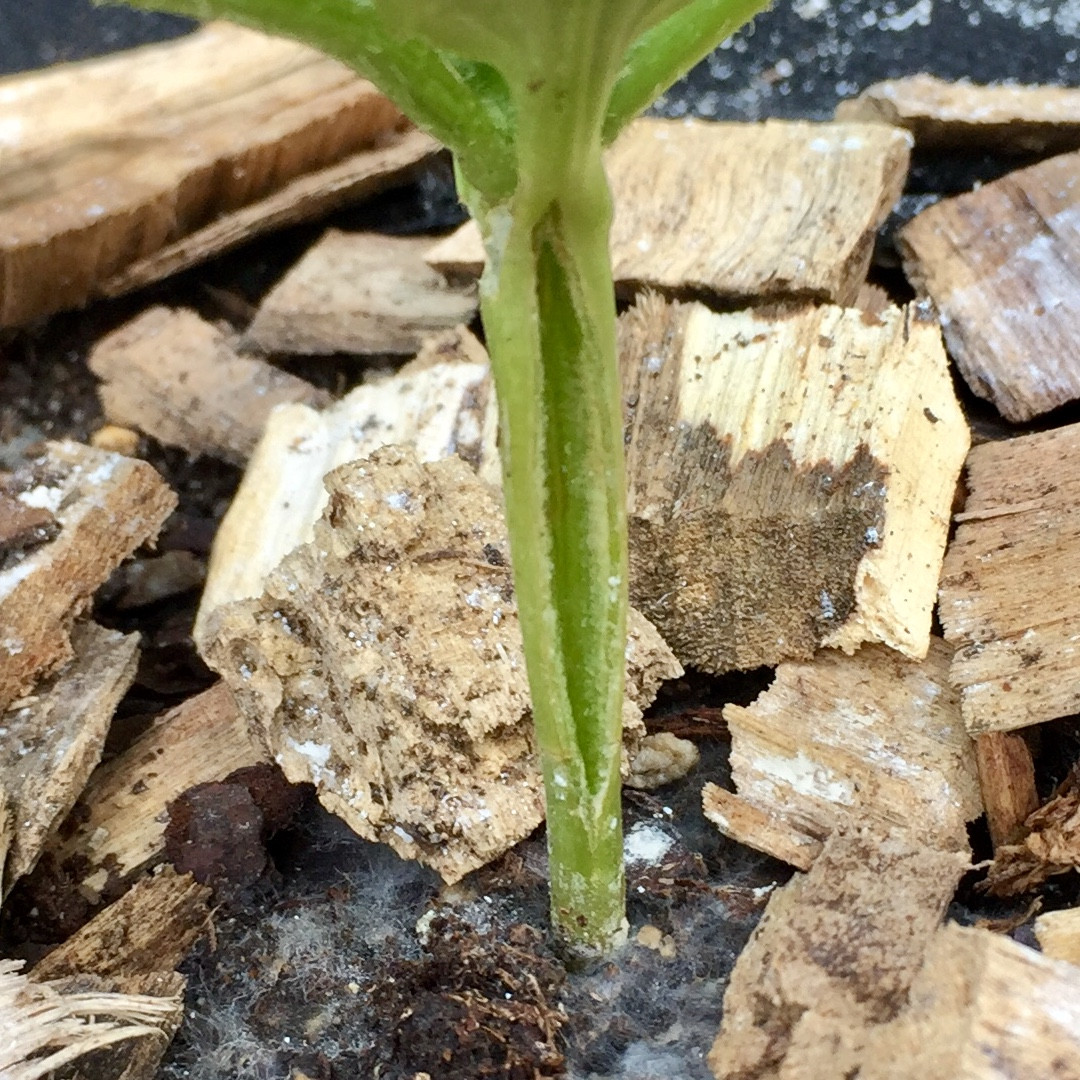 I think this was caused by a pest, either below ground or above it, but I was wondering if this kind of fissure could be caused by a period of under or over watering?

My main question is, do the first two photos of the watermelon plants show signs of either tobacco mosaic virus or cucumber mosaic virus?

Note: I'm not familiar with the proper tags to use, or if you think I rambled too much, please feel free to edit my question.

Browse other questions tagged or ask your own question.

7
Are my tomato plants damaged by a chemical or a disease?
5
When is the critical period for blossom end rot in zucchinis / courgettes?
2
Watermelon plants not growing
6
Is this the cucumber mosaic virus?
4
Recent tomato plant foliage growth suddenly covered with black dots
3
Tomato Mosaic Virus
3
Pepper plants are showing strange, deformed new growth, what could it be? Virus? Deficiency? Herbicide?