Is it too late to top this cayenne chili plant?

I'm trying growing out chilies for the first time (well, first time from seed, last year I bought some and aphids obliterated them after one happy month), and I'm having some mixed success.

The cayenne pepper has been growing much faster than the hotter variants I've planted. The plant looks happy enough, but the stem is quite thin and for a while it needed some support. I've read that lanky growth is sometimes caused by too much fertilizer promoting leaf and vegetative growth too early, so I cut back on that. I can see a sturdier stem with cellulose forming, but as a window plant I would be afraid to take it outside for a few hours on a good day, as I am not sure it would withstand any sort of wind.

This is what the plant currently looks like (just repotted). It gets all wobbly when moving the pot: 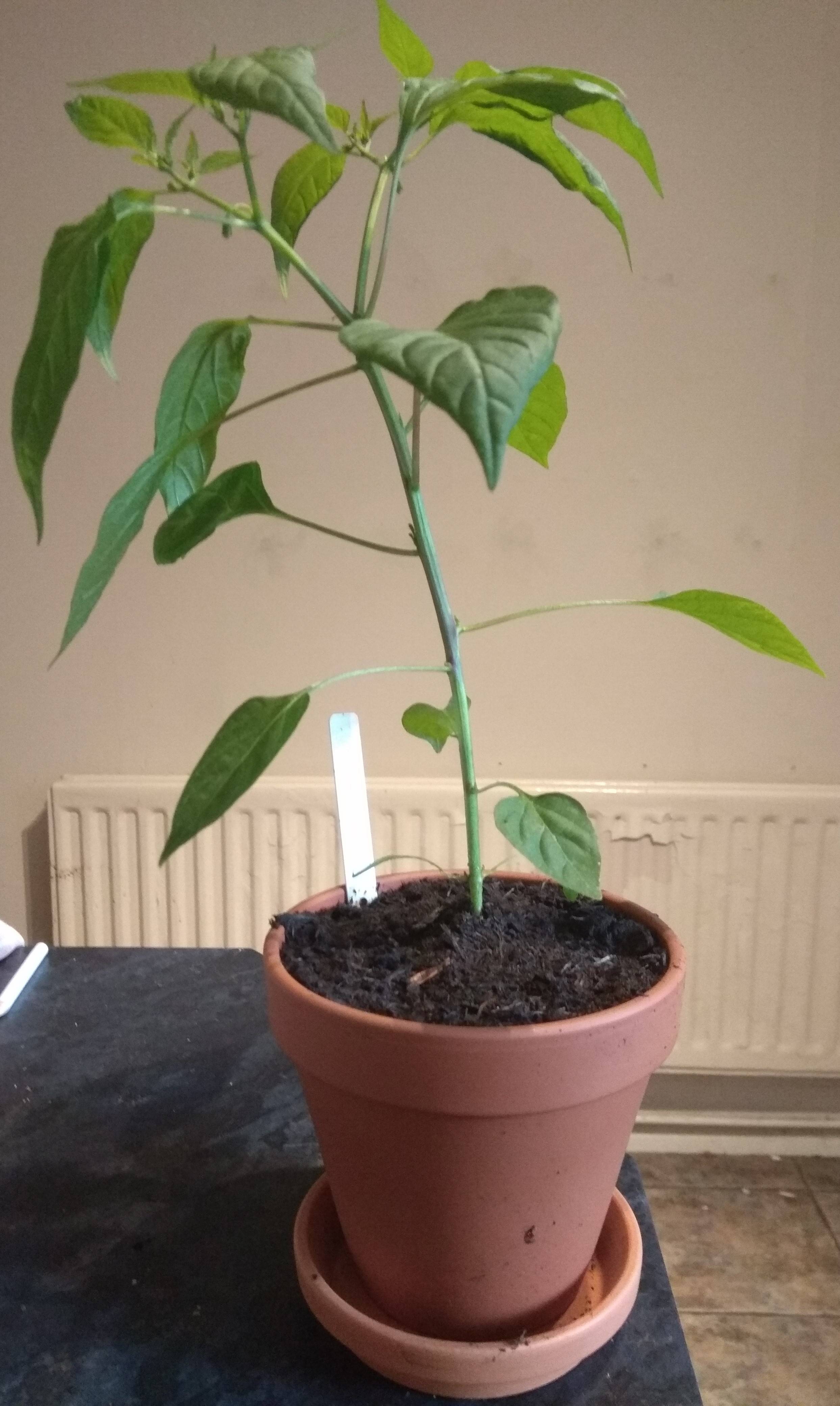 It has been started exactly two months ago (28/02/2019), which, in hindsight, considering how much sun the UK-midlands get, might have been a bit too early, but I was very eager (or was I?).

I've been looking at what I can do to thicken the stem and make the plant stronger. I've since removed the supporting stick and the cloth binding it to it (I've seen on this site somebody comparing support to an arm cast - your arm feels weaker when you remove it).

The one technique I've found used, especially on young chilies, aimed at promoting stronger stems and bushier growth, was topping (example with pictures). All the examples I found showed great glorious success. However, all of them were done on somewhat younger plants than mine, suggesting to top just after the first fork appears. However, my cayenne already made a second fork by the time I found out about topping, and it's putting out flower buds (better seen on the close-up below).

My questions are as follows:

I am leaning towards "not too late" here, and while doing it, I'm also considering trying to clone what I cut off while topping, as suggested in this discussion. (I think it's one of those things which will hurt me more than it will hurt my chili).

As I literally just repotted it, I would first give it 2-3 days (or more if needed, but the previous times it recovered after a day) for the repotting to take, and then top it.

My options here are: 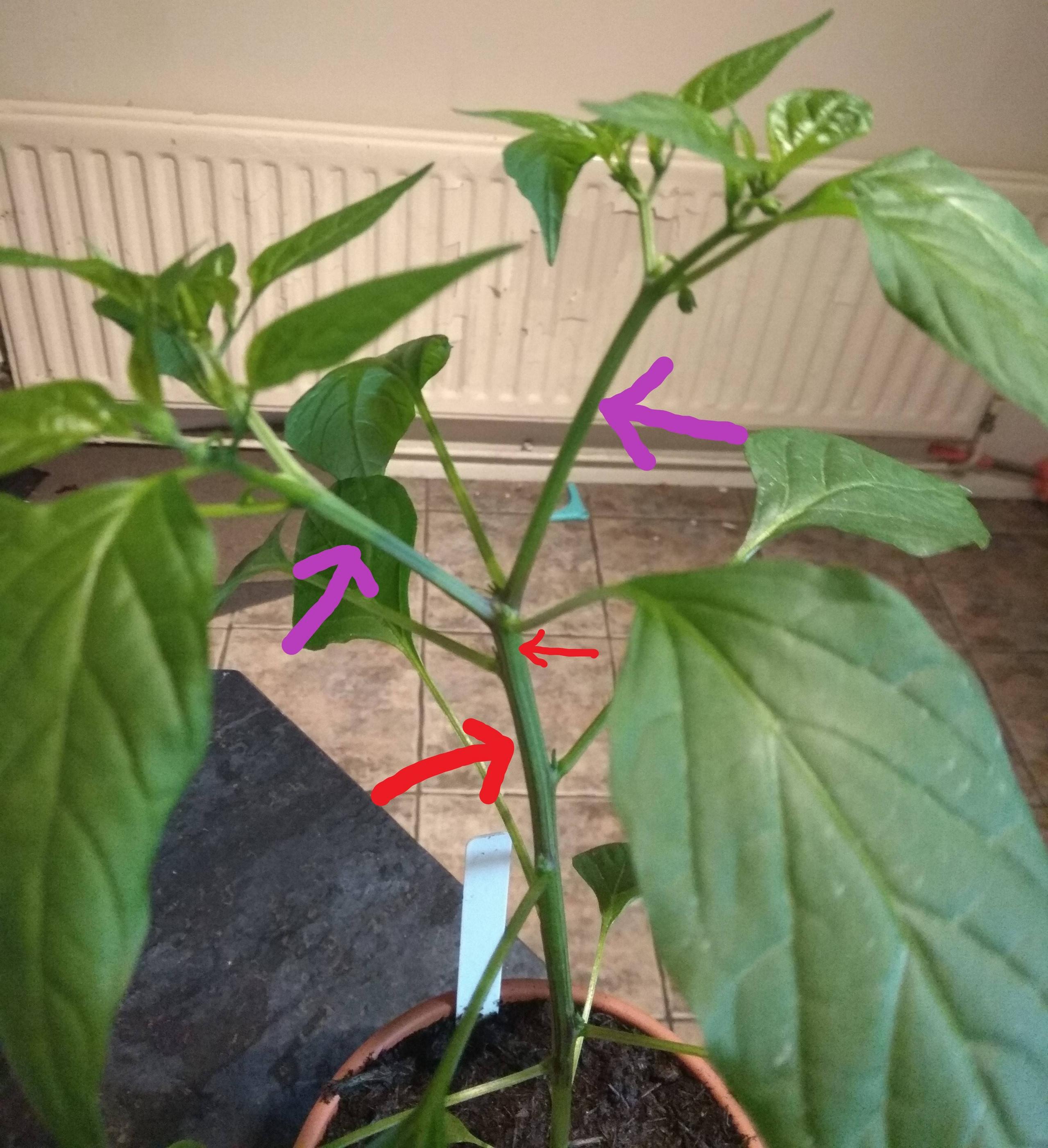 PS: In my research I've come across this post on chili pruning and topping, but that one is talking about pruning/topping in the spring, on old plants which have overwintered

PPS: (Bonus question) If I do go ahead and top it, I will definitely try to clone the parts I cut off - there is nothing to lose at all since I would be cutting them off anyway. Since they have flower buds on them, should I remove the flower buds from the potential clones, to allow it to route more power to the leaves and developing roots?

I think you are doing far too much research.

Topping can help the plant but is usually done in professional nurseries to make the plant bushier and more commercially attractive.

You have a very young plant there and I think it’s fine. However, I would have left the stake for support.

If you live in the midlands, I would not put it outside. A greenhouse is preferable or a window sill but not in direct sunlight.

If you are getting leafy growth, it’s because you are using the wrong fertiliser, probably high in Nitrogen. Change it to a tomato feed which is higher in Phosphorus and Potassium. These nutrients promote more healthy and sturdy growth as well as helping fruit development.

I have been growing many types of Chilis, peppers and tomatoes, and I have hardly ever pruned them, just remove or pinch foliage when overcrowded when fruits come. Do not remove the flowers, they are your future fruits.

You can propagate if you choose to prune but you need to make sure it’s a non flowering stem using the softwood cutting method. However, the plant will be weaker as a clone(lack of new genes!). Seed sowing is best and easier..... and February sowing is good time for sowing chilli.

Not the answer you're looking for? Browse other questions tagged pruning propagation chili cuttings or ask your own question.

9
How aggressively can you prune chilli plants?

6
Is this chili plant dead?
9
Am I doing the right thing with my chilli plants?
6
How to prune an overgrown (and now flowering) Dracaena?
5
What is causing white spots and wilting on my Black Naga leaves?
2
Is this a Cayenne Chilli pepper?
1
Mint questions: identification resources, survival of cuttings, and safety
4
Avocado pruning and repotting advice
4
Why are my chili flowers small?
0
Citrus tree cutting preparation for propagation