I live in Berlin. When a friend was looking to offload her large Ficus Benjamina, I volunteered to care for it. She has been in my home now for ~10 days and appears to be getting used to the place (some initial shedding of leaves, but stabilized now).

I have the following questions: 1. should I prune her? She seem to have many wispy branches growing all over. Also, the longest branch is bent and growing along the ceiling (which I personally like) 2. what'd be the optimum level of water that she needs now? She is inside a 60cm diameter pot. Any thumbrules to follow here? (Initially I noticed the tips of her top foilage turning brown and increased the water quantity. It helped)

Thank you very much for your answers :) This is the first tree of this size that I am caring for. 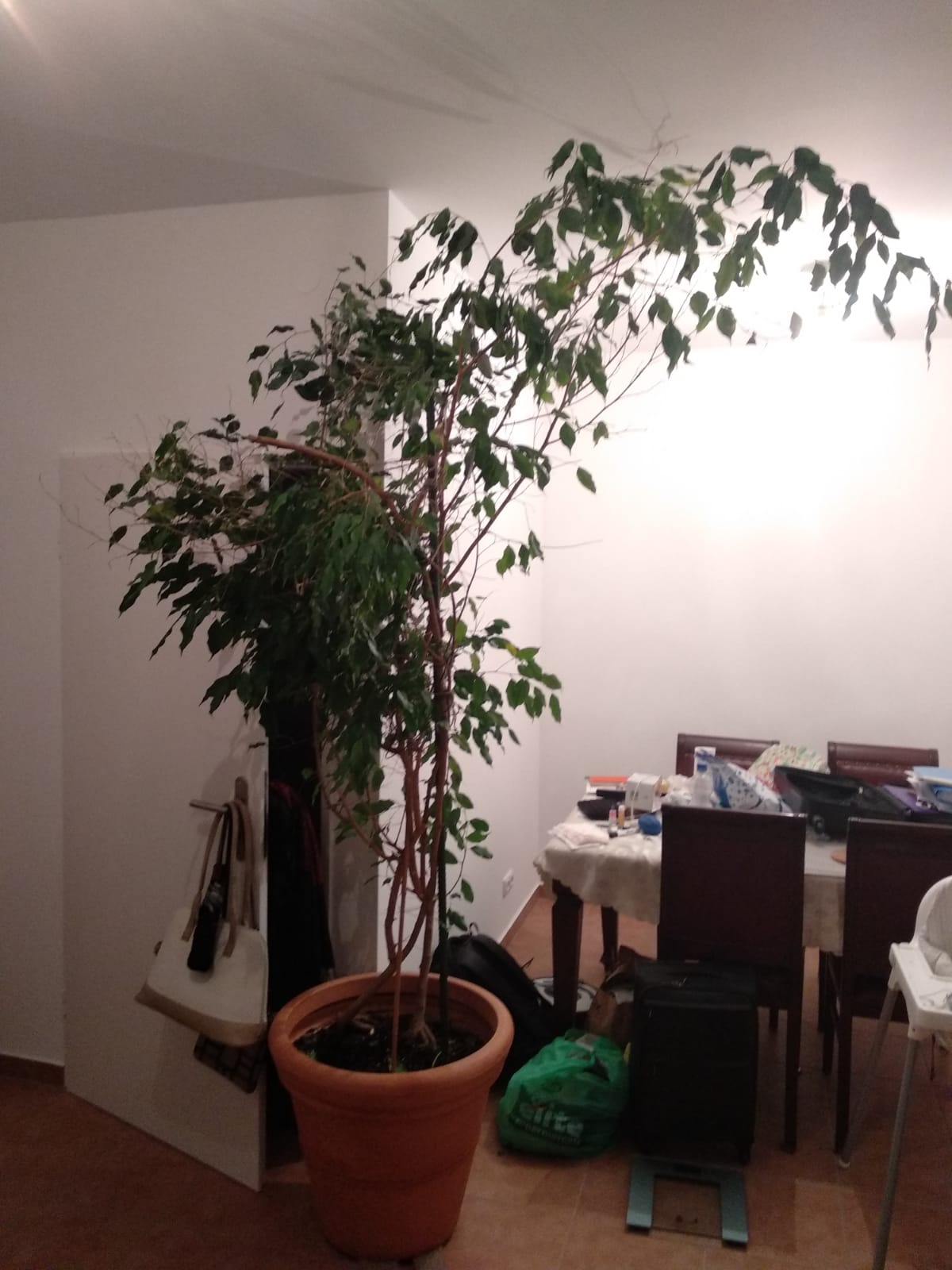 You can certainly prune out any dead, wispy stems which are probably there because of previous leaf loss. You can also prune back the top to give it a better overall shape, which might be a good idea to prevent the bit that's bent against the ceiling continuing to grow along it, which will make the plant look even more unbalanced. One thing about cutting these though - if you cut into any live wood (even the 'dead' bits might not actually be dead) they leak a white sap for a considerable while afterwards, to best to cover the floor and anything else in the vicinity with newspaper or something so that it doesn't end up on the floor surface or any other surface.

As for watering, water when the surface of the soil feels just about dry to the touch, water thoroughly, allowing the excess to drain away freely at the base, and empty the outer pot 30 minutes after watering. If that is an outer pot... if its planted straight into that pot and there's no drainage holes, that needs to be corrected - drainage is critical.

Other care requirements; keep out of draughts and away from heat sources - these plants like a steady, even temperature, otherwise they start shedding leaves.

In response to your comment below: I should have said, although a little winter sunlight is fine, Ficus benjamina does not appreciate direct sunlight during summer. It requires bright daylight, but not direct sun.

As for pruning and the long horizontal top branch, unless you're prepared to sacrifice the length of that branch, its unlikely you will be able to encourage growth on the less lush right hand side. Were this plant mine, I would reduce the top growth by a third, cutting off the branch that is tall and growing horizontally, probably to around 6 inches above where the left hand, thickest branch is growing. Then reduce that left hand, thick branch by a third, and shorten the branches still left on the bare, right hand side.

Actually, if I'm honest, I'm being conservative with this description - what i'd really do is more likely reduce the whole thing by at least half, to encourage not only growth on the right side, but also near the base, where there is a fair amount of bare wood visible, but you will probably think that's too drastic, though I've done this twice before on Ficus, in one case taking it down by two thirds, both times with good results over time. I would want a bushy, well shaped plant, clothed with leaves all round, which then will gradually put back on some height. Before you prune, please check the rootball first by turning it out of its pot to make sure it is not potbound - if the roots are coiled round and round, it may need a slightly bigger pot (one size bigger only), if they're not coiled round, then it's fine. You will need to take it out of its pot anyway if you need to make drainage holes... and however much or little courage you are able to muster with pruning, fertilize it regularly with a houseplant food (such as Baby Bio) about once a week for a month immediately after pruning, then reduce down to whatever the label says. And if the light source is on one side of the room, rotate the pot every couple of weeks so that all parts of the plant receive equal light over time.

With regard to watering and drainage, having drainage holes is critical, otherwise, there's a tendency to either under or over water because any water you do put in can't get out if it needs to - watering thoroughly with a litre or two of water whenever it needs watering, with the ability for any excess to drain out, is much healthier for the plant, as is allowing the plant to dry out slightly (so the surface feels a little dry to the touch) in between waterings.

Not the answer you're looking for? Browse other questions tagged pruning ficus or ask your own question.

13
Is there a simple rule of thumb for caring for potted plants in an office?
4
Are there seed pods growing on my Ficus benjamina?
4
What is happening to my Ficus Benjamina
0
Need advice for pruning indoor Avocado saplings
1
Caring for Ficus Starlight plant
0
Why Ficus benjamina Leaves are Curled/Half Closed
2
How close can I cut roots on large established ficus trees without killing the tree or causing it to fall over?
3
Ficus benjamina care and reviving