New topsoil has puddles on it

Problem My new front garden seems to have pools of water on it for a good few hours after rain.

Background I've just had the front garden redesigned, leaving us with a brand new area for planting and a new driveway. The area where the garden now is is our old driveway. The old tarmac drive was broken up, but left. Underneath the tarmac is solid chalk. Retaining walls have been built around this to effectively create a raised front garden to a height averaging 0.8 - 1.5m deep.

The infill is made up of a lot of rubble from the building works, like tarmac, bricks etc. Then there is some average quality soil, and finally a good 400mm of fresh graded topsoil.

The whole garden is to be used as a bed for planting topiary, shrubs etc - no lawn. We have planted lots of buxus already. 24 hours after watering, the soil still feels very sticky. Is this due to poor drainage? With all that rubble at the bottom, some ungraded soil (200mm perhaps?) and then 300-400mm of topsoil, I thought I would have good drainage. 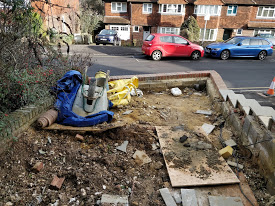 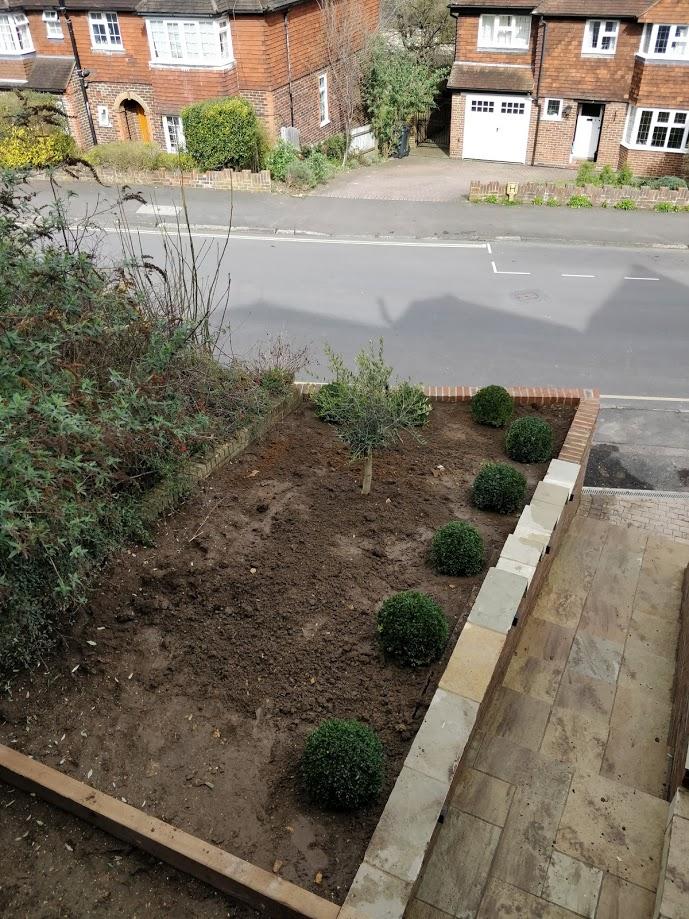 Can anyone explain why I would be seeing puddling of water after rain? Is this something I should worry about, or is this just usual for topsoil as it starts to compact down after delivery.

Any help and advise appreciated as I really don't want all this money to go to waste due to a mistake I've made so early on. So would rather try and rectify now if there is anything that needs doing.

I thought you were probably in the UK... First, let's just establish that we've had a fair bit of rain in the last few days with these storm conditions, so that might account for puddles for an hour or two, but no, it's not usual for puddling to remain for any longer than that because the soil 'hasn't settled', in fact, quite the opposite. You say the original surface and soil was over solid chalk - chalk does drain and in fact, can cause drought issues during summer. The usual advice is to make a few holes in the chalk if its a solid sheet to break it up a bit, because although water does percolate through, getting some organic matter into it helps the area to retain water and creates higher fertility, a lack of which can be an issue on chalk.

I suspect the problem you're having is (first) being caused by the sheer amount of large and medium debris - it would have been best to remove as much as possible of the tarmac, and only leave in there stones or stony bits under 2/3 inches in size. The second possibility is that some of the soil you've put in there is clay based, and that will puddle during very wet weather. If you've used heavy clay soil beneath the graded/screened topsoil, it will still cause a problem in very wet weather, such as we've had. It may also be that the graded topsoil has no or a very low loam content and therefore a higher clay content, and that won't help either, though clay in and of itself is higher in nutrients than chalk, so that's not all bad. I note you do not mention adding anything organic such as composted manure, spent mushroom compost, good garden compost, soil conditioning compost or any other type of organic composted material - as much of that as possible should really be mixed in, especially over solid chalk.

I am loath to suggest you take it all out and start over, removing the larger debris, but I do think you should 'unplant' the plants and work as much organic material as possible into what's there, at the same removing any large lumps of debris you can locate whilst doing that. This link https://www.rhs.org.uk/advice/profile?pid=763 on plants for chalky soils also gives some brief advice on how to improve chalk based soil, as well as listing plants that will cope in chalk conditions. This blog https://www.learningwithexperts.com/gardening/blog/soil-preparation-and-improvement also covers what to do with various types of soil in order to make them not only better draining, but more fertile, so you may want to read that too.

Ongoing, I'd recommend the addition of organic material at least annually - once you've sorted it out and planted up, you can just lay it over the top of the soil as a mulch once or twice a year, and nature will work it into the soil for you.

Not the answer you're looking for? Browse other questions tagged soil drainage topsoil or ask your own question.

3
Should I compact topsoil before laying turf?
4
Returning a garden paved for 30 years with packed clay below, back to lawn
5
Laying new topsoil, what if anything to mix in for worms or to kickstart healthy ecosystem?
3
Screened topsoil vs 50/50 compost soil vs peat loam for new sod
4
Should i use rocks in a (VERY) large container for gardening? (no drainage)
6
How to reclaim my backyard that has turned into a swamp?
5
What’s the ideal slope for draining a garden with clay soil?
1
Do I need to add new topsoil when redoing my lawn?
1
How compact can your topsoil be before laying sod?
2
Turf laid just on topsoil?