Why are the furled leaves on my Philodendron Hope Selloum brown?

I bought a Philodendron Hope Selloum a couple of weeks ago. Its mature leaves are very healthy, but I've noticed that two of the newer still-furled leaves have dead brown areas. I've been misting with distilled water every morning, and have set my plant on pebbles in a moisture tray, elevated so it's not in the water. The top of the soil felt dry when I bought it, so I watered it when I brought it home, and watered again today. The woman at the shop where I bought it said to water it every 10-14 days, but the resources I've read say this plant should be watered when the top of the soil is dry, and that brown leaves are a sign of over or under watering. I'm really not sure which is the problem. I should also mention that I bought it on a cold day when the temperature was below freezing, but the woman at the shop wrapped it in plastic and it was only outside for a few minutes. 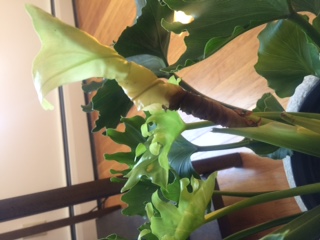 [Edit 2 months later] I never found a definitive solution, but since my plant has thrived since I removed the stalks with browned leaves, I think the problem must have been cold exposure. The furled leaves are very thin, and probably couldn't stand the winter air in New England, even for a minute. That's the last time I buy a plant in February.

Browse other questions tagged houseplants or ask your own question.