How can I control scale insects on an indoor olive?

Earlier this year I moved into an apartment with an indoor garden: effectively a balcony that can be opened up in summer and closed off in winter on both the external and internal side. Unfortunately the apartment had been a viewing apartment and uninhabited in the 5 years since it had been built, and an olive tree and nerium had both been infested with scale insect. I ended up removing the nerium, but the olive tree is still infested.

I’ve tried Provanto Care sticks that you can bury around the affected plant with no luck. I’ve also gone through a couple of applications of Calypso from the same manufacturer, but it’s a neonicotinoid so now illegal to sell here in the EU and I feel a bit guilty about using it; it didn’t help anyway.

The tree itself is growing a few new leaves at the top but most of the existing are infested and dead / dying. It is sprouting at the bottom of the trunk but I’ve been trimming those back. So what would people suggest the next thing to do is? I’m thinking that pruning the affected branches heavily back before spring starts would be the best idea, along with manually rubbing any scale insect off the remaining branches so they don’t infect any new shoots. Would love to hear ideas.

The photos following were taken today, but I’ve since brushed off as many dead/dying leaves as were willing to come down, and cleared them away for disposal. The tree is obviously much older than the 5 years the apartments have existed so I’d love to get it back to full health. 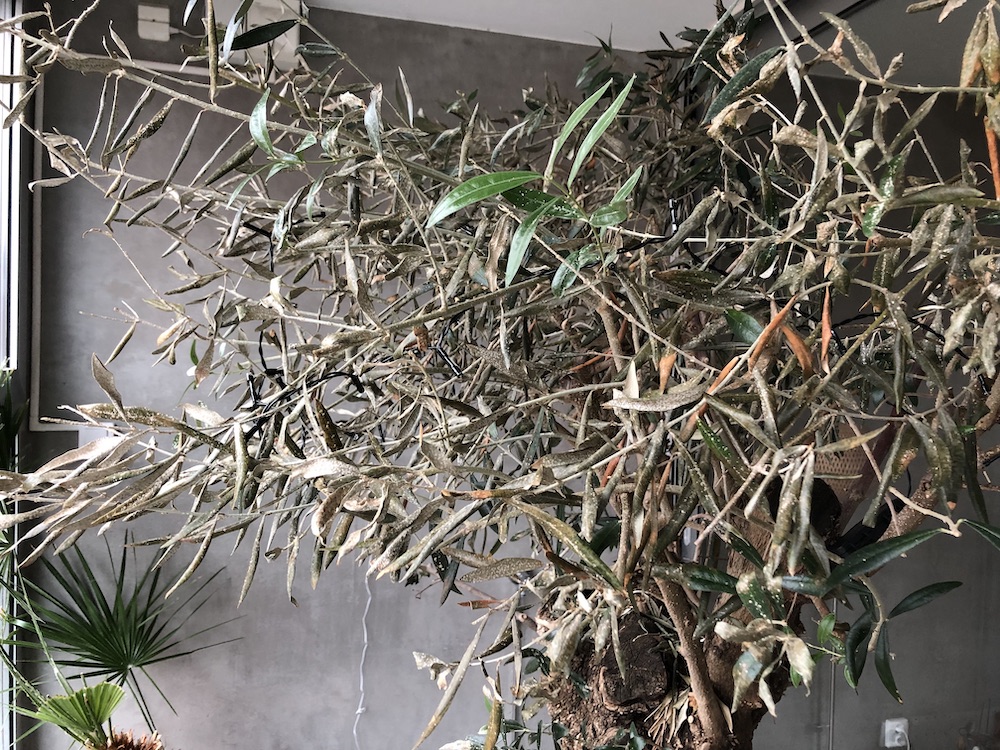 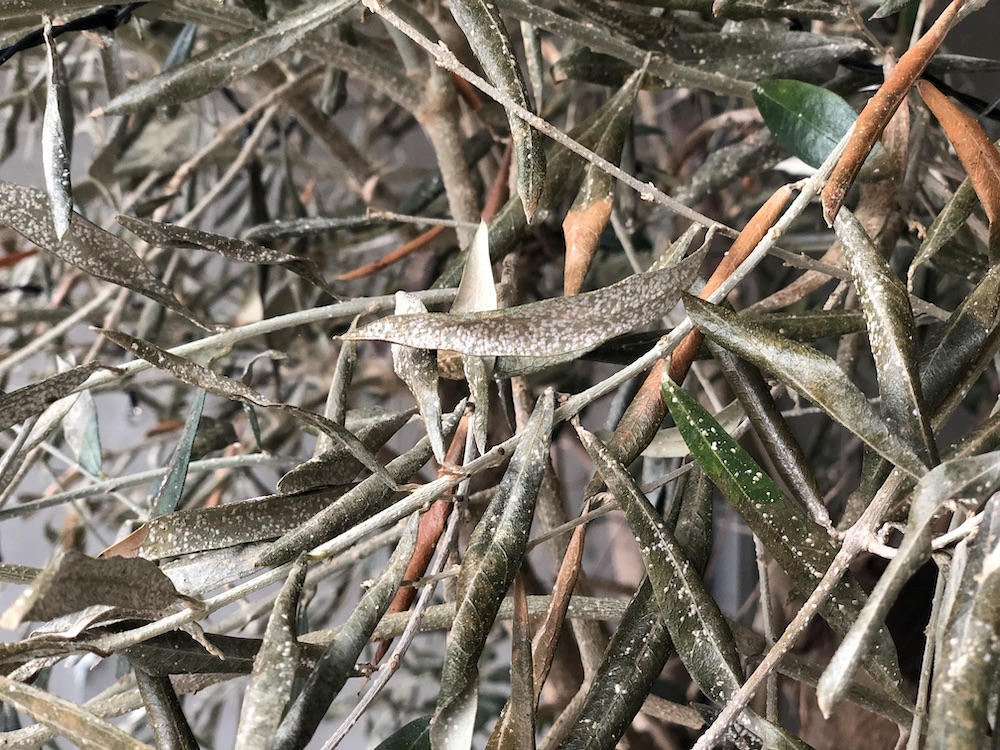 To be frank, I'd remove it. The new shoots from the base which you've been cutting off are arriving because the tree is desperately trying to put out new growth because its upper parts are so badly damaged. If it's scale, you should be able to find small, usually brown disc shaped objects attached to the woody parts - the white fluffy bits on the leaves will be junior scales or nymphs, and they've been greatly helped by not being exposed to cold winter temperatures.

You could cut it right down in mid April and let it regrow, but it won't look good for quite a long time, and if there's even one scale left on the plant anywhere, it'll be covered again in fairly short order. Where you are in the UK, olive plants survive the winter, especially in the ground, unless we have an unusually cold, snowy winter where temperatures remain below zero C for extended periods. Whilst cold weather won't kill the hard scales on woody parts, it would have killed or disallowed further breeding during winter. If you do decide to cut it down, any scales left on the woody parts can be removed by lightly moistening a jey cloth or something with methylated spirits, and rubbing the wood down with that to get them off. But do not get it on any foliage left behind...

The Trachycarpus palm visible to the left of the top image is extremely hardy, and would certainly prefer a bit of exposure during winter, rather than being kept behind closed doors, but, though it sounds possible from what you've said, I'm not clear whether you can leave the balcony garden door open to the elements whilst still having the inner door to your apartment closed.

If you decide to replace the current olive tree with another, keep a close watch for scale and deal with it at the earliest opportunity.

Not the answer you're looking for? Browse other questions tagged scale olive or ask your own question.

9
How I can persuade an olive tree to flower?
8
Bay Leaf Tree (Laurus Nobilis) with severe scale
6
How to grow an olive tree?
6
Why would my citrus tree have dying twigs, burrowing insects and black scale?
1
Scale like skin on indoor dragonfruit plant. Help!
1
Can scale reattach after being physically dislodged?
1
Is this scale on my English ivy? How to prevent spreading to other outdoor and indoor plants ? Should I just uproot and throw them out?