Are these insect eggs or some sort of fungus?

It’s been a rainy week here in Los Angeles and I noticed these today. I’m not sure if they were there before the rain but I’m completely stumped on what they are. 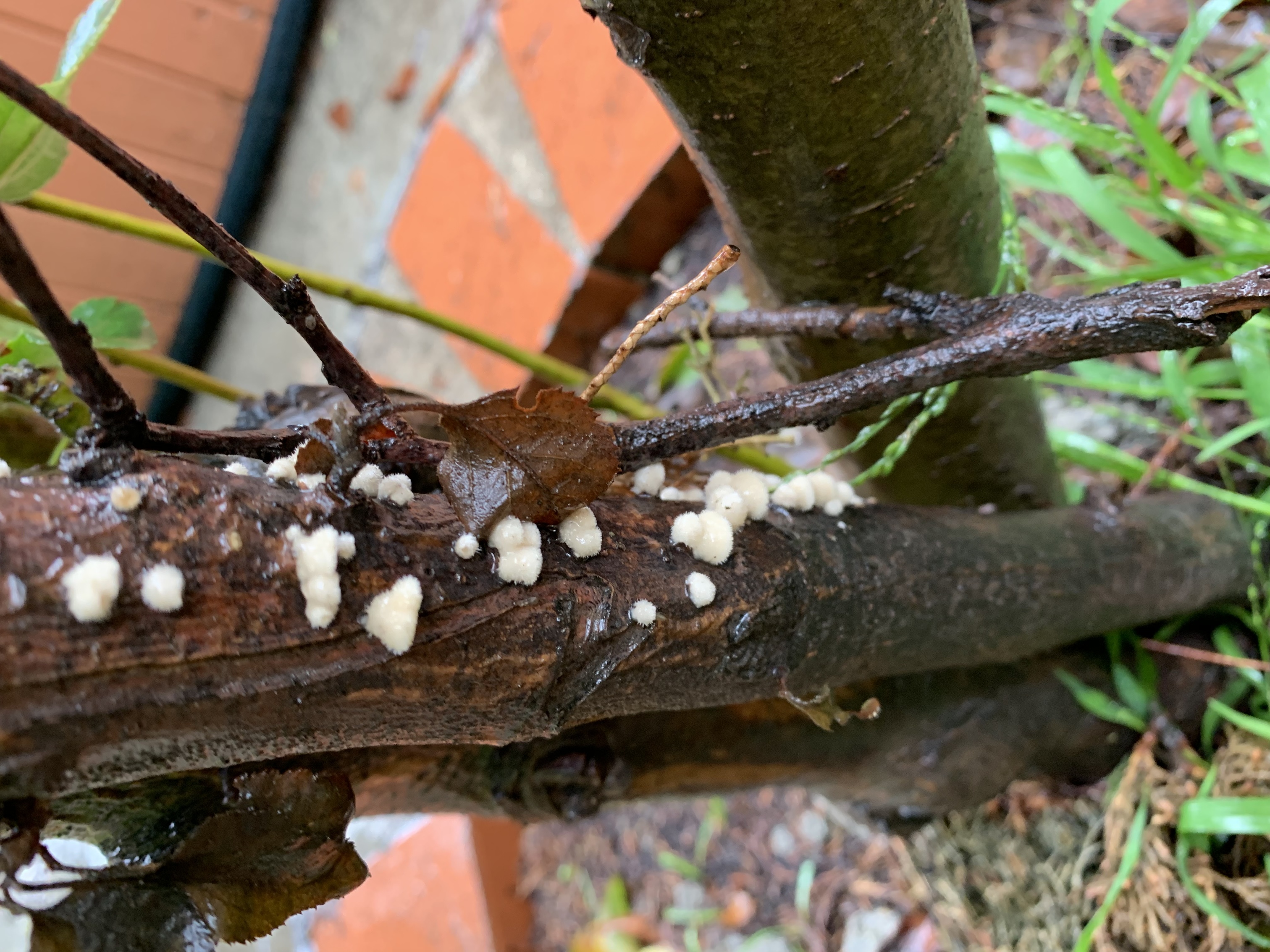 In your picture it looks like the upper trunk is cherry and the trunk that is covered with this scale (an insect, no need to worry about your trees)looks like a different type of tree; do you know what it could be?

Can you find this scale on any other plants?

Please send a picture of the leaves and a close up of a glob that you've cleaned a bit to see an insect in the middle?

Check out Schizophyllum Commune. I'm fairly sure this is what it is. Bottomside should have gills, but in the picture they are very young. Look at it from below or hold a mirror under it. It's a saprotrophic fungus. Once it has taken hold, there's really nothing you can do to remove it, since every action to that end will likely also be detrimental to the tree, leading to a higher susceptibility to disease and pests, while we can't possibly see how far the fungus has spread inside, so we would never really be sure to have removed it all, and spore release will have made sure there are new entry points for the fungus to start it's cycle all over. Circle of life. It might take decades for your tree to succumb to this mushroom, or it might take only a few years, it's hard to say. Avoiding spores of this fungus would be a fool's errand since it's the most ubiquitous fungi in the world, and since fungi spores are ubiquitous in their own right, and if there's one thing life teaches, it's that life will find it's way!

If it is Schizophyllum, it will turn into a paper-thin scaling when dry, but plump right back into it's fluffy normal appearance after some rainfall. It can be a really beautiful fungus, especially in larger shelves, and holds promise of very high value in the fight against cancer. In fact, it is the mushroom with the most promise for it, yet, sadly, to my knowledge it is not being used as such today.

Research/source: about 5 years worth of study and hobby mycology in the fields of mushroom determination and foraging, mushroom cell culture and cultivation, medicinal use of mushrooms in the fight against neuroborreliosis, and the role of mushrooms in mythology and religion.

Not the answer you're looking for? Browse other questions tagged identification pests insects or ask your own question.