What’s the ideal slope for draining a garden with clay soil?

Our garden is in the central region of Thailand which has very clay soil. The house is built on a raised plot of land, about 70cm higher than the surrounding area. The land was raised because this area was hit terribly by the 2011 floods. This raised plot extends about 5 meters away from the house on the north, south, and east, and about 8 meters on the West.

Following is a plan that shows the elevation across the land. (Up is north; all measurements are in centimetres.) I took the land at one corner of the house as datum (zero). At this point we have noticed water remaining on the land after heavy rains and taking days to drain away. All elevation measurements are shown relative to that datum, in centimetres. Positive numbers show higher land, and negative numbers show lower land. As you can see there is not a great deal of variance in elevation, with the highest point 22 centimetres above datum on the north side of the house, and the lowest 7 centimetres below datum on the west. It is also obvious why the datum point got waterlogged, because it sits lower than the surrounding land and so rain from a wide area will drain towards it.

Outside the raised plot of land, the surrounding area is 70cm lower or more. There is a pond and a canal to the east which we can freely drain onto. 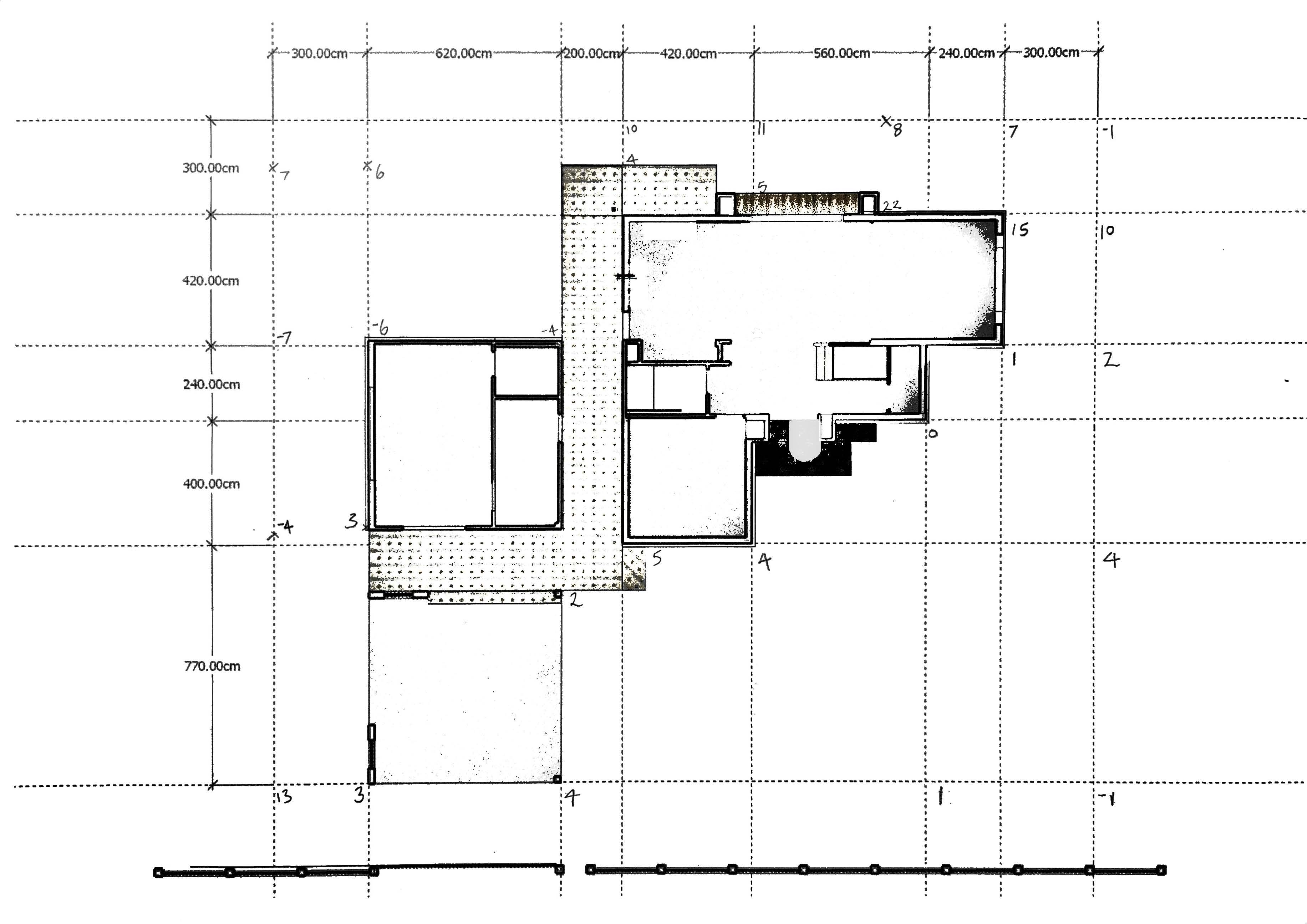 Below is a Sketchup rendering of the house in its surroundings. The fact that the land is raised is just visible. At point A you see the east side of the raised plot of land as it slopes steeply down to non-raised land. 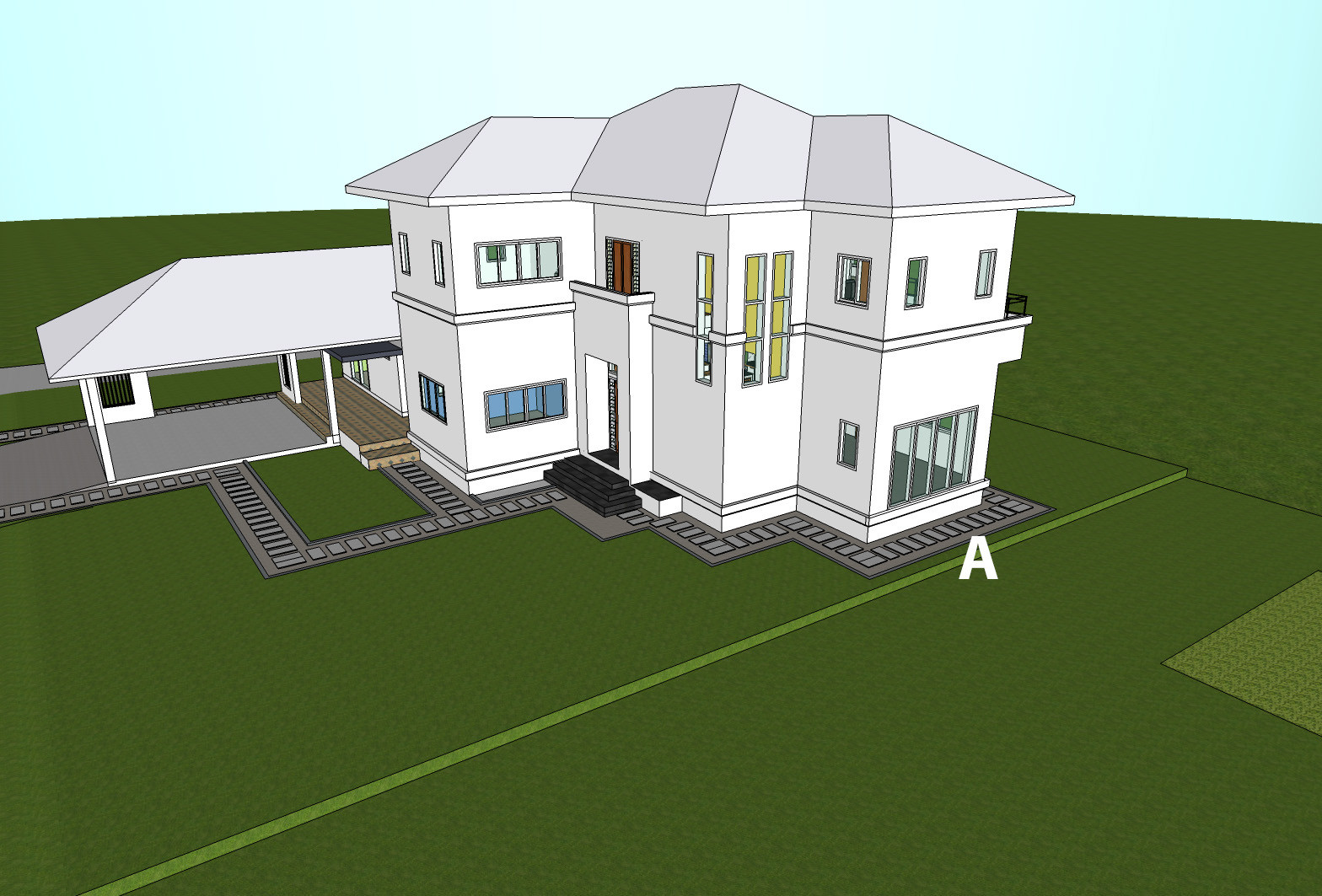 We’re planning on further raising the plot of land with topsoil, both to improve the quality of the soil and also to improve drainage. We need to change the gradient of the raised plot of land, as it's currently sloped very slightly towards the house. We’re already having some problems with damp, which I’m eager to fix. I would like to know what the ideal slope would be away from the house.

I’ve read that 2% slope is a minimum, but that seems to be a general rule of thumb without taking into account soil types. I’ve also heard to have a steeper gradient (5%) in the first few meters away from the house, which seems like a very good idea to me to protect the house from damp.

If there are things we should do other than plan the right gradient, that would also be useful to know.

More Details about the Situation

The soil in this part of Thailand goes dry with wide cracks after a few days without rain and with the copious sun, but is like mud in the wet season.

We will have a path that extends all around the house, which will be about 140cm wide. It will be of gravel surrounding large concrete paving slabs. My plan is not to excavate for this path, but to build it up from the existing ground level. We will use 10cm of crushed gravel for the substrate.

We’re planning on growing trees, flowers, and vegetables. Most people around here do raised beds, which seems like a good idea. We will try to grow some grass, but the more trees we grow (to provide shade), the harder it will be to grow grass.

Here is a photo I just took from the second floor balcony over the main entrance, looking south-east over the land towards the pond. As you can see, the land is mostly empty, with some trees. We have access to compost, but if we need huge amounts we would need to buy that. 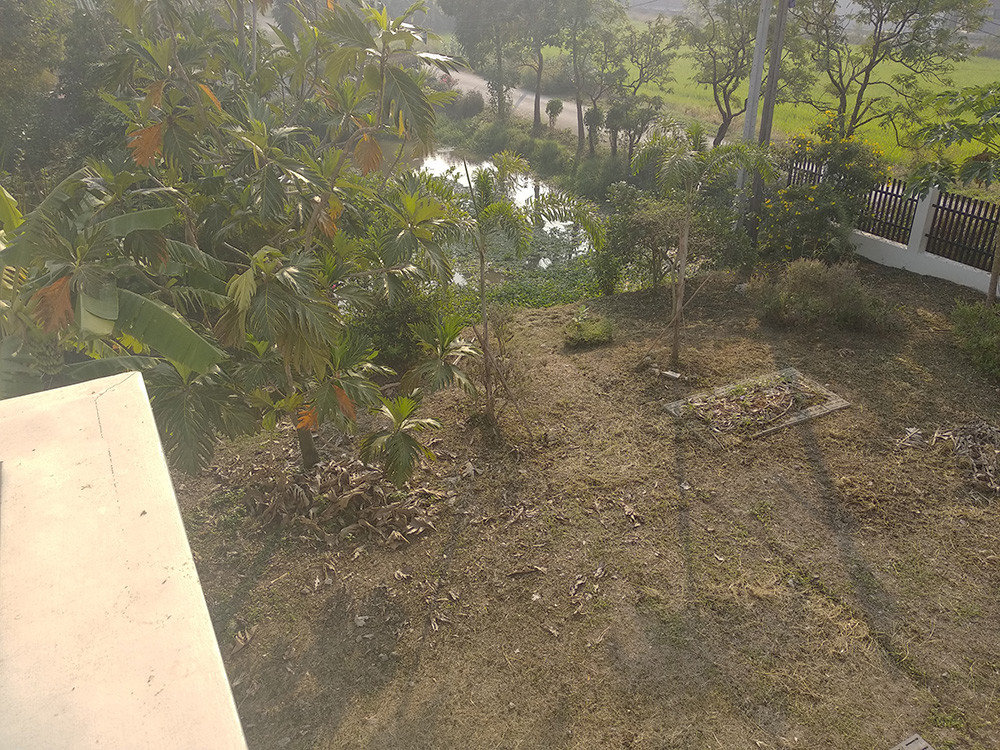 Heavy equipment access is limited due to the following factors:

Great Kit, well I imagine that by this point you have a pretty darn good idea of what needs to happen. However, to answer your question the "ideal" slope varies heavily on the location hence why I asked so many questions. Considering your drainage problems and the soil type I would say your estimate of 5% for the first 140-150 cm off the pathway will work. In fact, anywhere from 2-5% will work; just keep in mind: soil and land on a slope will tend to erode faster than land that is not sloped.

Specifically, the points which are relatively close to the house where the ground level is higher than the house are going to be problem points or priority points for you. At these locations is where the majority of excavation will occur: 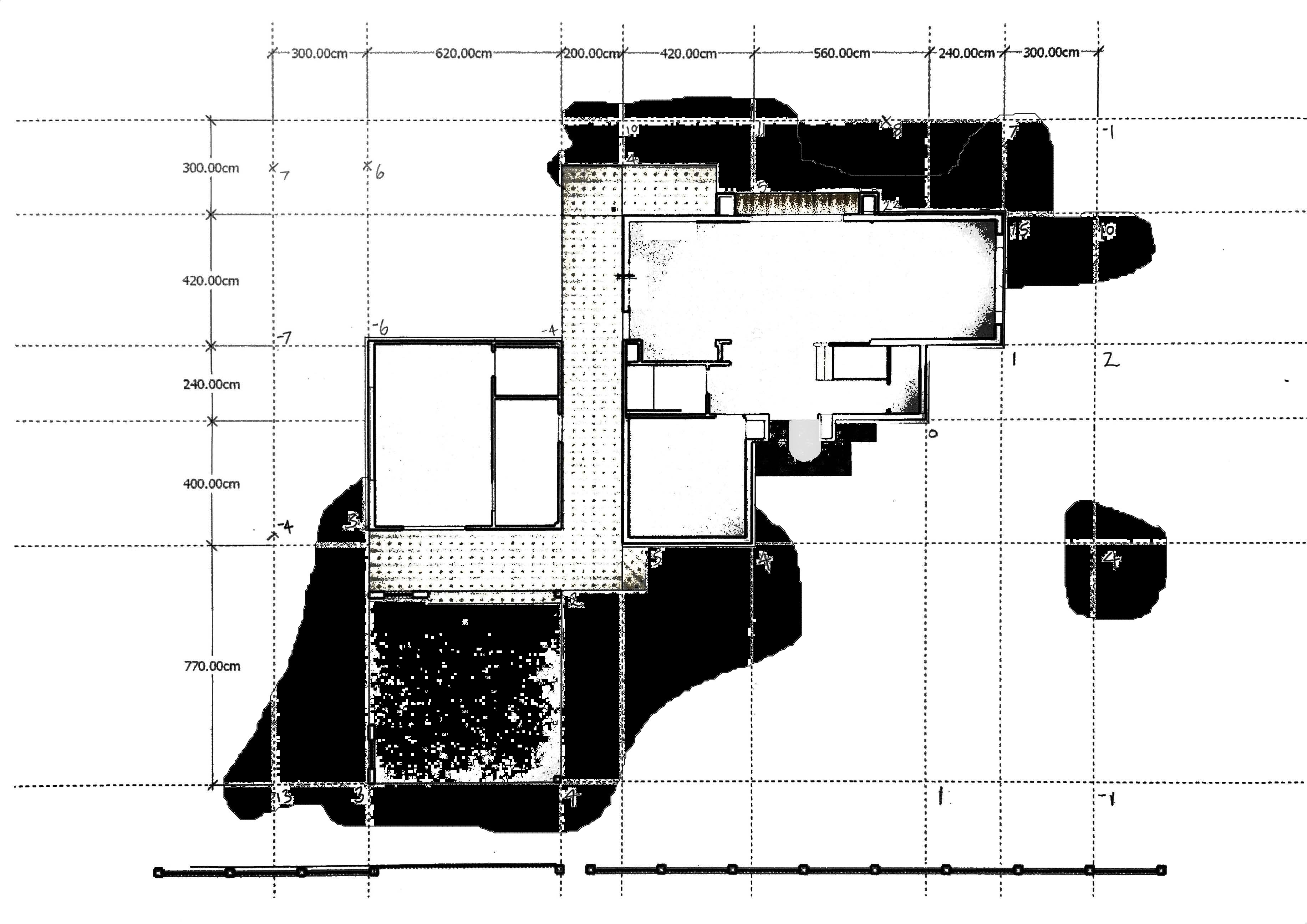 I highlighted those regions in the picture above. You mentioned not wanting to excavate for your new pathway; however, I believe that in a few regions it may be necessary to excavate to some degree. Try to keep the pathway around a 1-2% gradient away from the house, not enough to see but enough to move water. After the pathway and where it doesn't exist you could attempt to establish a gradient of 2-5% at all points. This may be more difficult than necessary in some regions so get as close as you can without over working or over spending.

IMHO in a perfect world your house would be the highest point on your property and the surrounding land would be terraced with each terrace on a slightly different elevation and constructed in a linear fashion: https://www.britannica.com/topic/terrace-cultivation

This style of land management is incredibly powerful. It is a great way to manage water without using culverts or outside materials which are not part of the natural environment and becoming a close study of this methodology will be very useful for you so read up. I believe it to be the best general solution to your many different quandaries with your renovations including but not limited to the water and raised garden questions.

Not the answer you're looking for? Browse other questions tagged soil drainage or ask your own question.

19
What are the ideal soil conditions for planting giant sequoia saplings?
12
What is a recipe for a long-lasting, fast draining container soil mix with good aeration?
5
What is the advantage of a raised bed over clay soil vs just amending the clay soil?
2
What is the ideal state of symbiotic balance in soil called?
1
Soil for terrace garden
9
Clay filled lawn with bad drainage, needs solution
3
Weep holes in garden retaining wall
4
Can I improve clay-like soil with little stones?
6
How to reclaim my backyard that has turned into a swamp?