We have two euphorbias which we are struggling to take care of. They aren't dead but the leaves continue to brown and fall off. We aren't sure if we are over watering them or under watering them. Any suggestions and tips? 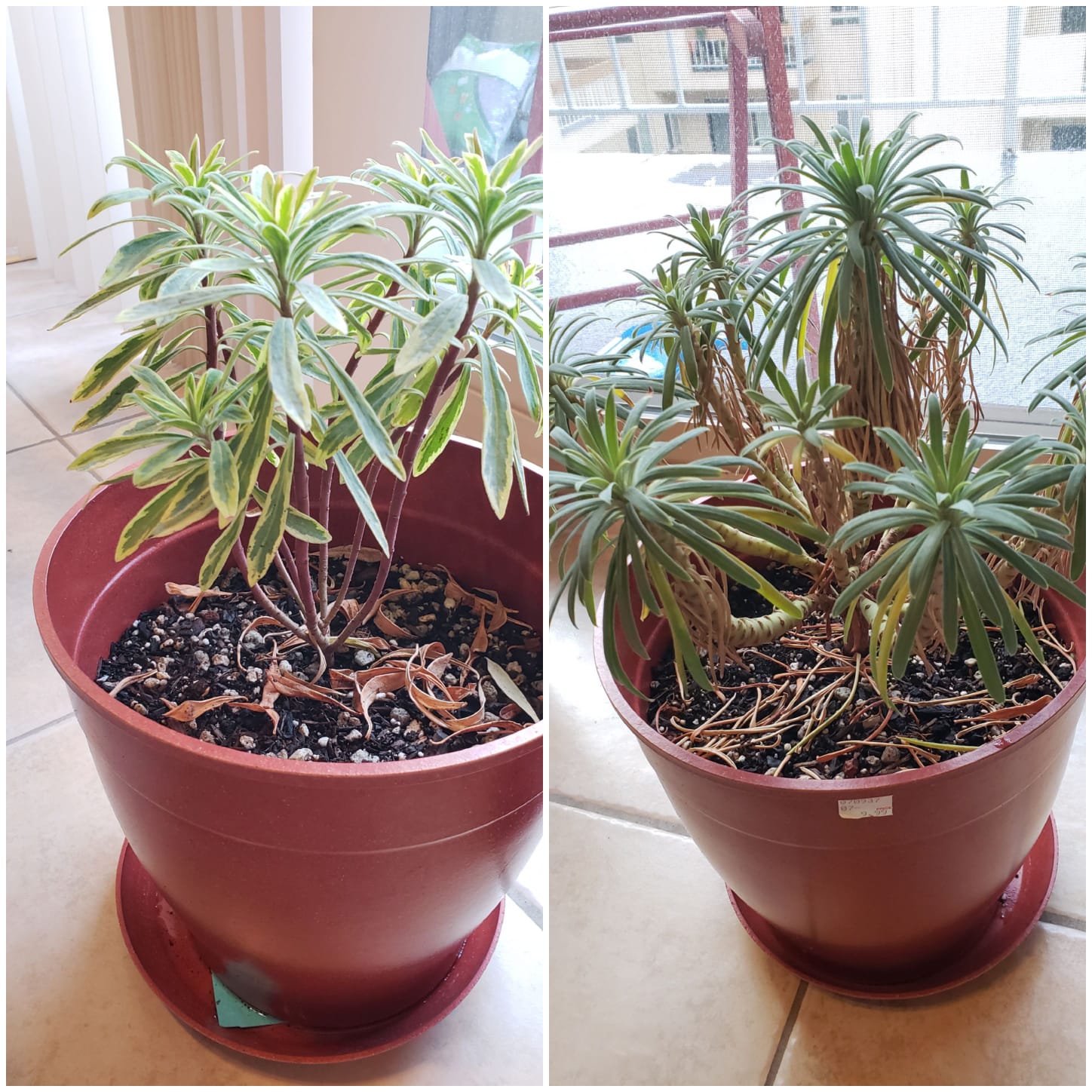 Thanks for the additional information. The first thing to say is, these particular varieties should always be outdoors, they do not tolerate indoor conditions for any length of time at all, added to which they are highly toxic if consumed, so any pets you might have should be kept away from them. Note also that the milky sap of these plants is a skin irritant for many people, so always wear gloves when handling the plants.

That said, both plant pots do not have sufficient soil in them - at a minimum, the soil level should be up to the line about an inch below the top of the pot - the variegated one is in a worse situation than the other in regard to that.

The variegated one is a Euphorbia martinii variety, and it is usual to cut them to the ground (or the soil) in late autumn, so that should be done now, particularly if you get frost where you live (not sure whether you do or not). The other one, being a characias variety, has a different pruning regime - immediately after flowering, every stem which has flowered should be cut down to soil level, being careful not to damage any new growth arising from the roots. If you've only had these a couple of months, perhaps you haven't seen any flowers on the stems, but by the look of the stems you do have, it's possible they flowered in spring and should have been cut down, but it has failed to produce any new growth from the base. Cutting it down might have encouraged new growth to form.

You don't say how you've been watering, but the rules are almost always the same - water when the surface of the soil in the pot feels dry to the touch, but not so dry it's shrunken from the sides. When you do water, water well - judging by the size of the pots, you'd need to probably give each one at least half a litre if not a whole litre of water. After 30 minutes, the outer tray should be emptied out so they are not left sitting in water. Whilst these plants are fairly drought resistant and some drought won't kill them, they tend to drop leaves if they are not getting enough water. Fertilize with a general purpose, balanced fertilizer in spring, as growth begins.

With regard to pruning the characias variety, it's really too late to prune, but I suggest you cut down 3 or 4 of the stems that look the worst now anyway, keep it watered as necessary, and see how it does next spring - if it flowers then, prune it correctly afterwards.

Not the answer you're looking for? Browse other questions tagged plant-health watering plant-care or ask your own question.

3
Taking care of a peach? tree
1
Housepolant identification and care
1
How to save unwatered croton? Nothing seems working:(
2
Aglaonema Firecracker leaf turning yellow with brown spot. Sunburn or overwatering?
3
Flamingo flower (Anthurium) dying: three years on
1
Can someone help identify and diagnose this plant?