How to help an avocado plant recover from plant transplant shock?

I have an avocado plant which has sat and grown happily (well probably not) on a windowsill in my flat for ~ 2 years. I paid it no attention except to water it occasionally when I noticed it needed it as it was left here by an old flatmate. I decided last weekend I wish to take better care of it as it looked like it wasn't doing so well, so I went to the garden centre and bought a new pot, soil and some filter type stuff and repotted the plant.

It has been a week since repotting and the plant looks very sad and thirsty. I read up about plant shock after repotting and was aware this would happen. But that after a week or so there should be some improvement, it only seems to be getting worse.

Here is a picture of the plant as a whole:

I repotted the plant as it was in a much smaller plant pot and the tips of the leaves had started turning brown which I read that probably means the soil of the plant has a concentration of salt in it that is too high. What's more I think the plant was just planted in soil taken from the garden which I also read is bad for an indoor plant. Repotting the plant disturbed the roots significantly. I cleaned all the existing soil from them (I don't know whether this was a good idea or not) by washing them in a bucket of water but did not trim any of the roots (as I didn't know to check for root rot).

I put it in a new, bigger, clay pot following advice from the garden centre with the following structure (sorry it's in german but the picture shows how it is set up). 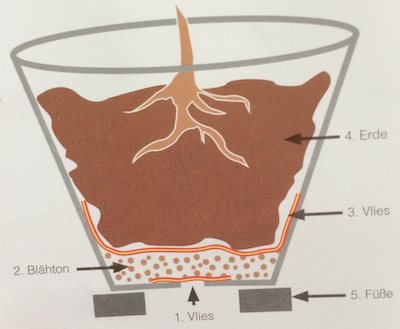 Since repotting I have watered it a few days after repotting, letting the water drain through the soil as I read this should help the plant settle. The soil is moist to the touch and does not feel like it needs watering again but as you can see the plant does look thirsty. Should I water it more or not?

Is there anything I can do to help the plant recover and adapt to its new, hopefully better home? The plant is in a warm room with ambient daytime temperature of ~18 degrees celsius and is above a radiator next to a window. The window is east facing but this is not something that can be changed, nor can the plants location to another facing window.

Avocado have shallow tap root and wide feeding roots near the surface from what I've learned so it's most likely in shock from your disturbing those feeding roots, they are very sensitive to changes and disturbance. You only want to water it when it dries out. If the soil is wet let it dry out before watering. The roots will search for water but overwatering can be deadly to them. If you use tap water let it sit for 24 hours before watering with it. Avocado leaves can droop like that from both over and underwatering so you have to check the soil. If you can take some in your hand and make a ball it's plenty wet. If not it needs water. Usually you can check down about 3" if its moist let it be. Browning of the leaves can be from over or under watering, disease, pests, sun scorch, natural leaf cycle of death, salt build up from chemical fertilizers etc.

I have many seedlings from pit that have been neglected and most died from winter rain and freeze but others look dead and then grow new leaves and branches. It may lose all its leaves and look dead but can still come back eventually if you scratch the trunk and it's green there is still vitality in the plant and the root system is alive but if it's dry and brown it's dead. I have one that's about 4 years old that nearly died, the main tree died but 2 new ones came back. I have yet to cut the dead one off. I bought a wurtz and it's suffering shock and losing leaves. It's very sad to watch a loved plant do unwell and sometimes all you can do is wait and see. All parts above ground can do photosynthesis so even without leaves the branches can make energy to produce new leaves at least from my researching if my poor lil cado will live because I can't do anything for the tree at this time, I research all I can lol like tracking a package. It cost $100 and I will be devastated if it dies but it was in a 3 gallon pot the nursery took it out of then over watered and wrapped in plastic then foil for shipping and I hope it didn't cause root rot in the week it was shipping but only time will tell. It had lateral buds and terminal growth and now nearly looks like yours. Good luck to you and your tree's future, I hope it's a long fruitful one.

Not the answer you're looking for? Browse other questions tagged watering transplanting avocado repotting or ask your own question.

1
How to treat fungus on indoor avocado plant leaves

45
How to prevent avocado from drying out indoors?
4
Question Repotting Sansevieria (Mother-In-Law's Tounge)
4
Opuntia is slouching after repotting
3
What to do (immediately) with a waterlogged pot plant?
5
Help needed to repot my 42" avocado tree in my apt please!
3
Is this avocado plant suffering from hard-water build-up?
1
How to treat fungus on indoor avocado plant leaves
5
How to prune chili plants to help recover from transplant shock
3
avocado plant from water to soil
2
How to care for my potted avocado plant