First of all, I live in Valencia, Spain, where the temperatures now are about 16-20°C.

I have a dionaea muscipula that I bought at Lidl store and I moved it to a plastic pot. I bought it being the half of it size. The plant is indoors next to a window with about 4-5 hours of full sun at the afternoon.

I bought the plant with its leaves already lying over the ground, and since then nothing changed. It's growing new leaves, that, at the early stages of the leaf, are straight and pointing up, but when the leaf become wider and the traps grow the full leaf falls to the ground. Some pictures attached. 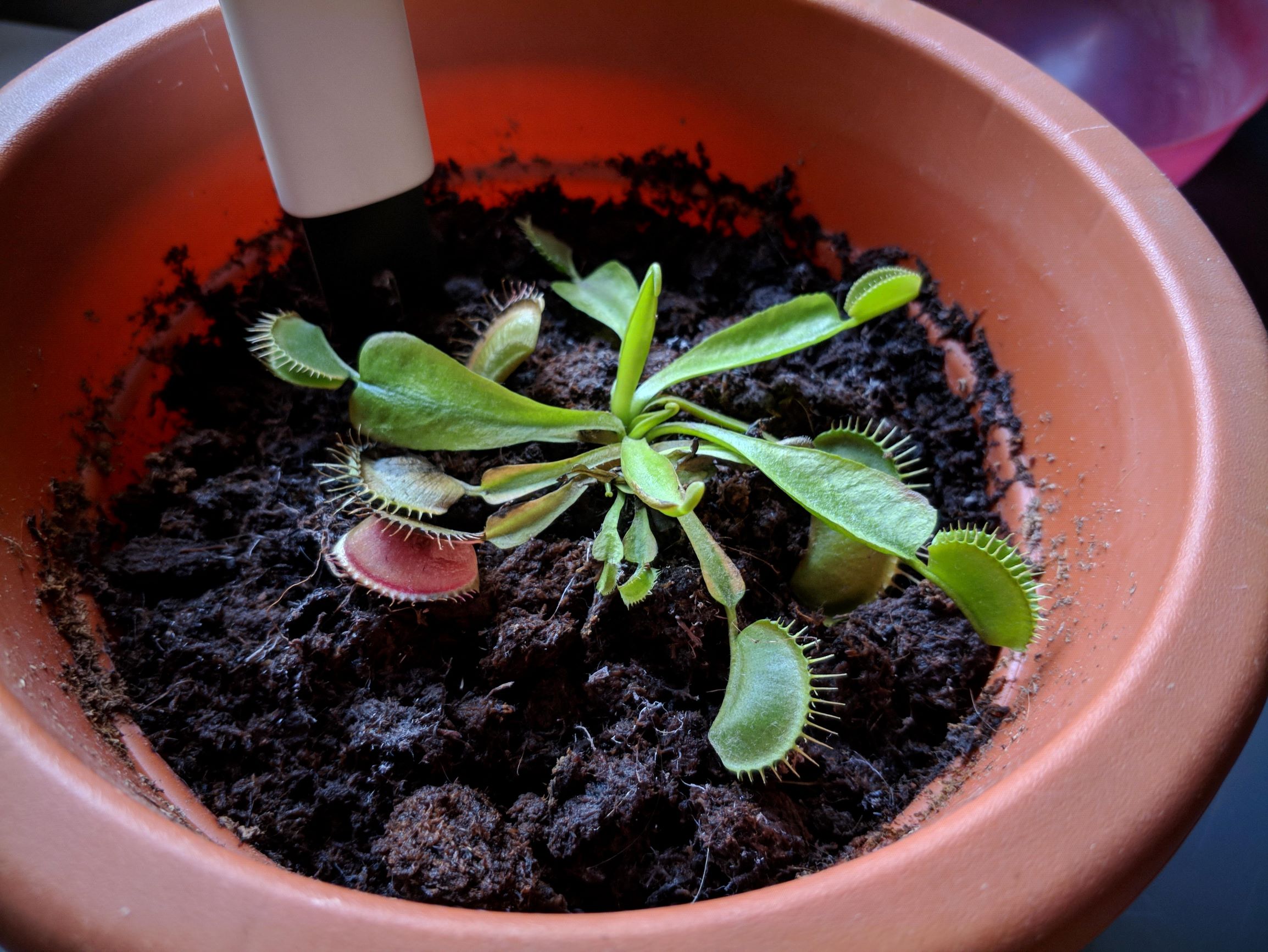 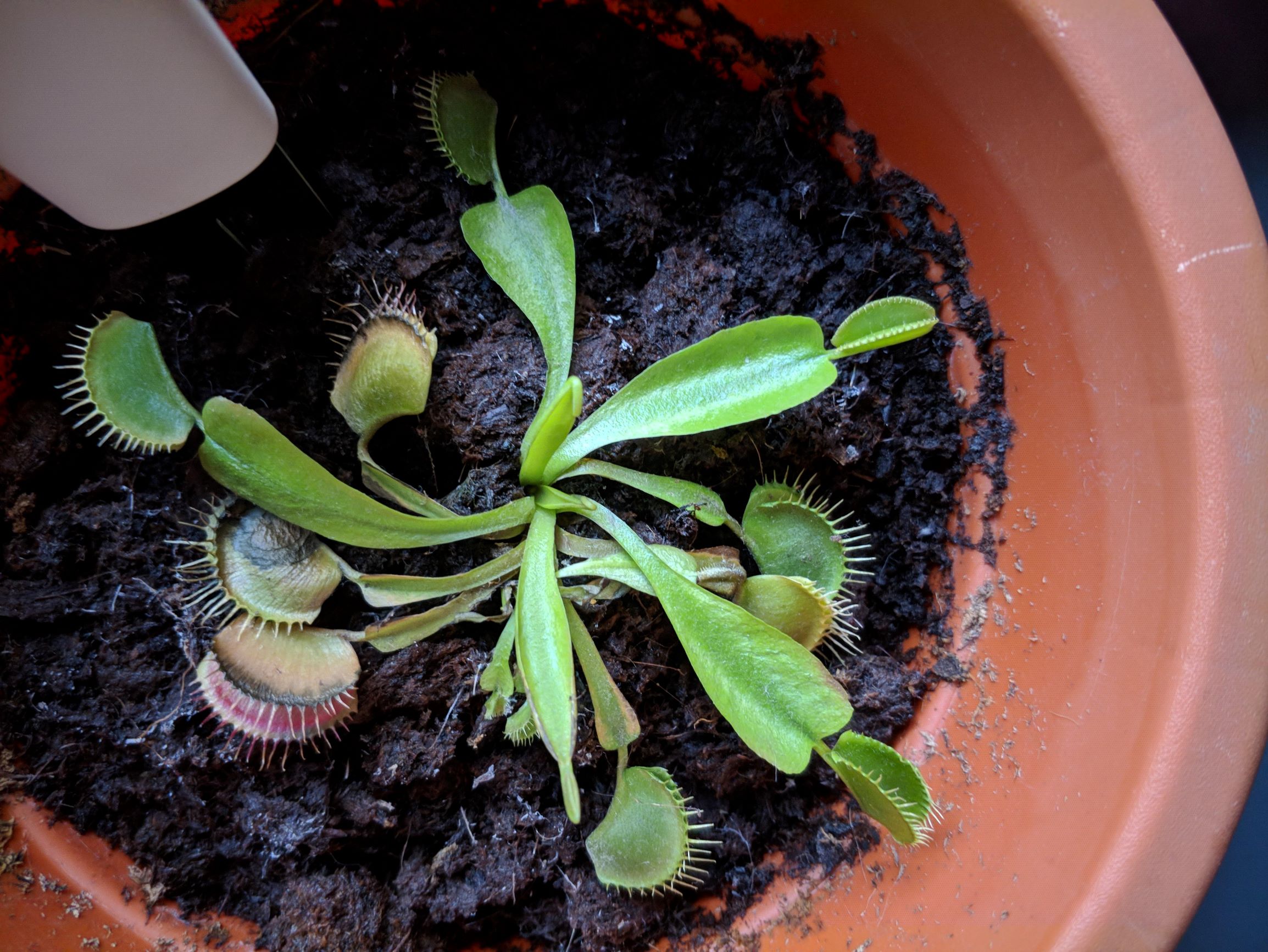 Is it normal? Maybe its related to this variety of Venus Flytrap. Should I do something? When I search pictures on google every image shows plants growing straight up, none as mine.

Since Valencia and Elche have quite similar climates, maybe my experience helps you: I have my venus flytraps for one year and a half, and they seem to be happy staying outside (in a balcony) all year long, getting direct sunlight even in the summer.

Regarding watering, the pot of my plants is inside a bigger pot, and everyday I pour destillated water into the bigger pot (only a mm of water or so) , so the plant can absorb the water through the pot holes. This seems to be working quite good (they even gave me flowers!)

It isn't normal, no. Not entirely sure what the problem is, but there are a couple of observations to make from the images you've posted. First, the soil in the pot is too low, which means the plant gets less light than it should because of the amount of pot sticking up above it. Second, the soil it's in looks like it might be pretty wet, though it's hard to be sure, so I'm wondering if there are drainage holes in the pot. If there are, do you have it standing in a tray or something to catch excess water, and if you do, that should be emptied out 30 minutes after you've watered if any water has collected there. These plants like high humidity and don't like to be in dry soil, but nor will they like being in wet soil that doesn't drain freely. The other possibility is, its going into its dormant period, but as its been like this since you bought it, I'd still recommend the soil level in the pot is corrected. Some further guidance here https://www.carnivorousplants.co.uk/resources/venus-flytrap-complete-guide/

UPDATE following your comment below. If the soil has remained too wet, then what I also suspected may be true - the pot you've used is way too big for the plant. I don't know how long you've had the plant, but if its a relatively recent purchase (in the last 6-8 weeks), then I think you should find another pot which is only about 1, maybe 2 sizes bigger than what it was in when you bought it asap. Despite the fact its about to go into dormancy, I would decant it from its pot and replant into a smaller pot now, at the right height, using fresh potting soil from the carnivorous plant soil you bought, being careful not to damage the roots. Water in lightly, just to dampen the new soil, and see what happens. You were always going to have to decant and repot anyway - you can't raise the soil level with moss or anything else without resituating the plant higher up. And leaving it sitting in lots of wet, unoccupied soil while its dormant won't be doing it any good at all - I think the risk associated with repotting it now into something smaller is a lesser risk than leaving it as it is all winter.