What is the best shade tree to shade the front of my house?

What type of tree(s) should I plant to provide the best shade on a two-story house?

I would like to provide as much shade as possible on the red square below: 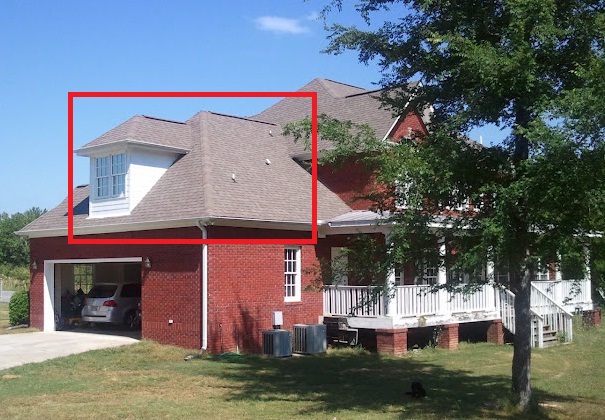 The part I'm most concerned about is the window area. That is my office and, in the afternoon, outdoor temps that go over 85 turn that square area into a small oven. Even with the A/C blasting; there's only so much it and insulation will do.

The place to plant the tree is key too. Here is an overhead view of my house: 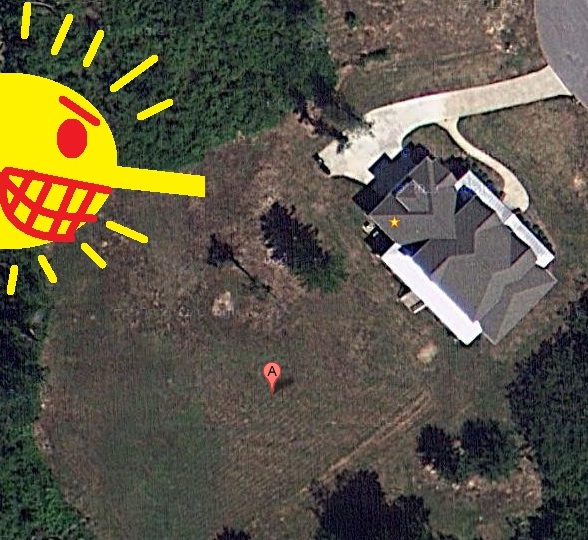 Do you see what the evil sun is doing every afternoon from 2-5? He wants to bake me.

I understand this task will require a bit of patience so anything that would provide shade in the next 5 to ten years would be fine.

Based on an answer and some comments, let me refine what "best" means:

How much should it grow per year?

How long should it live?

I don't know the average life expectancy of trees, but something that would last at least 30 years should be fine.

Oh yeah!!! Much-o important-o! Especially in that little window area in the red box since that is where I work.

Should it be easy to maintain?

YES!!! Anything that requires work on the ground (e.g. raking) not a huge deal, but I don't want to climb ladders and trim limbs every season.

How big should the tree be to start with?

Small enough to fit in the Minivan you see in the garage or that would fit on a small tow trailer.

Yes, obviously, but it would help if I listed climate: Alabama. I should also mention we get awful tornado weather every year so I would not want to plant something that would blow over and destroy the house.

A problem is that any tree you plant will take a few years to grow sufficiently to give a second story room much shade. A tree large enough to help you within the next few years will be quite costly, and well beyond your limits for a self-planted tree.

There are some trees like a Leyland Cypress that grow incredibly quickly. However Leylands are not supposed to be good in hot climates, and they have a shallow root system, so storms will be an issue. There are good, fast growing trees you can find for your area.

So you might try planting a second tree that will grow eventually into that hole to block the sun. Don't put it too near the house or driveway though. Any tree that large will be a problem otherwise. Anyway your existing tree will gradually fill out to provide more shade, IF you don't stunt its growth by having another tree next to it. You may do as well by just making sure that existing tree is well watered and has sufficient fertilizer to grow as rapidly as it can over the next few years. So add some drip irrigation around the tree you already have.

I'd save that money on a new tree, and instead look at improving the quality of your insulation. Replace that window with a triple glazed one, with the proper coatings designed to reduce the cooling load. Then I'd look to add an inner layer of insulation on the wall. Go for 2-3 inches extra on those walls the sun bears down on. The nice thing is both of these fixes will give you immediate relief, instead of waiting for 5-10 years for a tree to grow enough to be of help.

A final trick that may help is to cool the garage underneath. Add a fan to vent the air out of the garage when it gets too hot. This will reduce the heat infiltration through the floor of the room above. You may also look at insulating the garage ceiling.

Obviously, it all depends.

For 'instant' shade in 5-10 years, that's going to require that you purchase a tree that is

The drawback to that is

So, that's the main trade-off. Looking at your picture, it looks like you already have a tree well on its way to shading that entire end of the house. What you could consider doing is plant a few quick-growing trees that will get you the shade sooner than later, and then remove those trees another 20 years down the road when your other tree has matured.

As for what tree to get, I'd consult a local arborist or local nursery. Those folks will help you pick the right tree for your locale.

As DA says, a local arborist should give you good advice.

Along with all the other questions: What is your water like? If you have sufficient water, then Alabama says "Magnolia" to me. Dense foliage and they can grow big, but I'm not sure how fast they grow. More ideal for the wetter parts of the Gulf States, people do grow them in gardens here in DFW and they get big (personally I would plant a more drought tolerant plant for DFW).

The one shade tree you have there looks like a red oak or similar. These should grow fairly quickly if properly encouraged. Every year put tree food spikes around the drip line, and water regularly if not getting enough rain. Also, an interim solution would be the 3 pane window and attic insulation. Also, a arizona ash will grow very quickly and can be removed once the red oak matures.

Conditions.
Shading the second floor requires taller trees (dooohhh, I know)
NMOsZ "vicious sun" 2-5pm photo indicates that BVFcU photo is nearer to midday.
BVFcU shows downspout (gutter drop, leaders, whatever) extenders. The driveway itself looks well-graded. The grade near the house looks too flat, IMO. OTOH, your soil looks like coarser loam or "dirty" sand, and camera lenses distort.
The state of the mowed vegetation looks more like summer or fall than spring.
Two A/C compressors on side of garage? They would like shade, too.

Your back (SE side?) has tilled ridges. Photos don't tell much, but the woods looks consistently immature height. Was the area clearcut 15-20 years ago?

Non biological...
Whitewash the brick. White roofing (too late for now, though I've read of the concept of painting roofs).
Good ventilation under the roof deck.

Goals, selection.
As others have replied, "Long-lived" and "Fast growing" are biologically/ecologically opposing adaptions.
For example, some (most?) poplar (Populus sp) species grow fast, but also drop large pieces of themselves in high winds. Fast poplars roots find and fill sewer lines.
A direct hit by strong tornado will shred even a slow sturdy tree, but will also shred the house, anyway.

AFAIK, taller trees will give better overall cooling than lower trees, even if both completely shade the ground level.

30 years is shorter-lived than average.
Initial planting size doesn't matter for some species. At least some Oak species grow faster from direct seeding. Pecans and Persian walnuts also might.

If there are no other concerns, i would grow small fast trees somewhat near the house, then large slow tree further, then large faster trees far from anything that's expensive (street, sidewalk, etc). You can also start some large slow trees as understory among the large fast trees.
I think it's obvious to choose large trees most carefully. Small plants can be revised more easily. However amongst weed species, small rapidly-maturing (seed spewing) species can be most obnoxious.
If you plant trees to fill the currently tilled area, I predict brambles and trees will seed and sprout in between. They might compete with the desirable trees. Also raccoons will move closer to the house. Around large trees I have seen weeds tilled. Near smaller trees, a large self-propelled mower might be better than tilling.

Fast shade the on wall?
Visibility and security concerns near house suggest small trees rather than shrubs.

Info.
Look around the neighborhood. Take photos for ID.

Public and university libraries, garden clubs, should have info. There should be one or a few standard 'classic' regional references.
Perhaps take a quick look at homestead planting info (commonly recommend evergreens on winter wind side of house)
Take a look at SE USA natives.
Native Plant Societies

Try Tennessee info if you're in north AL

(Disclaimer: I did not visit most of those urls.)

The fastest growing tree I can think of is Eucalyptus gunnii, the Australian gum. Very deep rooting, may grow up to 6 feet year, but I've no idea how well it would do in your climate. The other problem is, I don't know about footings to your house - in the UK, a tree which reaches 60 feet or more must never be planted less than 45 feet from any house or structure because of the roots threatening the footings.

The fastest shade tree is not always the best. Fast-growing trees are usually weak-wooded, and you wouldn't want that close to the building! If you're in Alabama, any tree you plant will grow very quickly, so you are lucky. Some people plant for their children or grandchildren in more northern climates. An Allee Elm will grow quickly, with the trunk expanding 1 1/2 inches per year. It is a huge tree (60 ft) with a form similar to the classic American Elm. You should get good shade within 3 years of planting. If you want a smaller tree, you can plant a Natchez Crape Myrtle. It has very fast grow and can reach 35 feet. You should see good shade within 3 years of planting it, too, because it has very rapid growth. 100 days of large, white blooms.

Not the answer you're looking for? Browse other questions tagged trees plant-recommendations shade or ask your own question.

29
What is a fast-growing deciduous tree for shading house in summer? (Long Island, NY)
11
What are some good tree suggestions for providing some shade for the house (Seattle, WA)?
10
What are the best deciduous shade trees for Phoenix, Arizona?
5
Will prickly pear thrive under the eaves on the west side of my house?
3
Shade tolerant plants that including ones that will cascade
7
What Would Be A Good Shade Tree for Oakville, Ontario, Canada?
8
What is a good distance to grow coconut tree from house and compound wall?
4
I need help deciding on what tree to plant in my backyard
4
What are the best trees to grow as sustainable firewood in the UK?
1
Shade tree suggestions near house in southeast PA