How old should a cottonwood be for me to start pruning it for bonsai?

This little bonsai cottonwood has been growing now for about 3 months. He is about 6 inches tall now and has been transplanted from his little cup to a bigger cup!

I am wondering, when would be a good time to start pruning his foliage and roots? Should I give him a year, two years, or should I start soon?

Looking for information from someone who has successfully grown bonsai.

The art of bonsai is to have a small tree in a pot, but looking like a real (mature/old) tree in miniature. To get your bonsai looking as an old tree, you'll need a large (thick) stem or trunk and hanging branches (old trees have heavy hanging branches, while young trees have upright branches). To get a young plant/tree grow fast in thickness, you can pre-grow the bonsai in a large container or in full ground. The thickness will grow much faster than when already in a small bonsai container, it can take decades when you put a seedling already in a small bonsai container. I have an Oak and Horse chestnut grown from seed, and after seven years the chestnut was thick enough to put it from a large container into a bonsai container. The oak is 8 years old now, and will be put next spring in a bonsai container (now it is still in a large 20 L plastic container). When growing it in the large container, you can prune some of the long shoots already and try to keep it compact.

So when the tree is thick enough you can put it in a bonsai container and start pruning and shaping it into bonsai. It depends on how large your bonsai container is and how large the tree has to be. For trees of around 60 cm (2 ft), this took for me 7-8 years. Once you have shaped your bonsai, you can try to bend the branches downward with copper wire, just to give it the old hanging branches effect.

There is a lot on internet about bonsai, I like this site here. 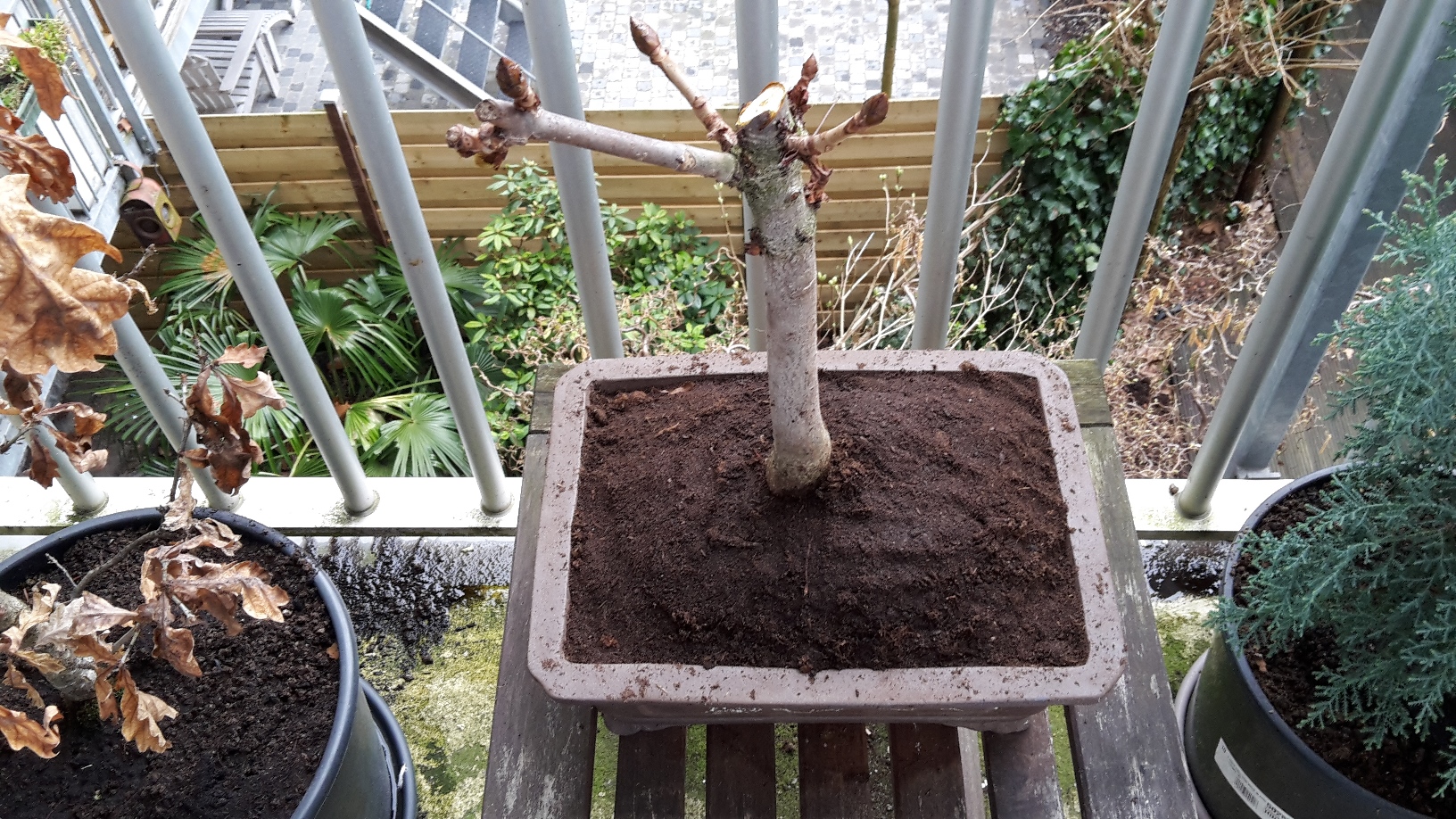 It all depends upon what size of bonsai you want to create. A fundamental thing we want to create in bonsai is a trunk that tapers from the soil to the apex (top) of the tree. With the 'formal upright' style one wants an 'arrow-straight' trunk; otherwise trunk lines should wander in interesting ways. One can wire stems to make them wander, but they won't taper. So this means that stems get cut and/or trunks get chopped.

When one does this, the stem end below will not get any thicker until the new shoot from it is nearly as thick. What this means is that one lets a trunk/stem grow until it is as thick as desired, then it is cut/chopped and the next segment is grown until it is becoming nearly as thick, then it is cut/chopped and the process repeated until the desired end is achieved.

So, you need to let your tree grow and grow until the base trunk is as thick as you want. The general rule of thumb is that the final trunk height should be about 6 times the diameter of the trunk base. We use higher ratios for more feminine trees and lower ratios for 'beefier' masculine forms (ultimately what is known as 'sumo').

Here is a deciduous tree of mine that I've spent nearly a decade with that is of a very feminine form. Every year I let is grow and then cut it back in around the time of the summer solstice and after leaf fall each year to produce the branching. You can likely pick out the places I've pruned over the last few years. 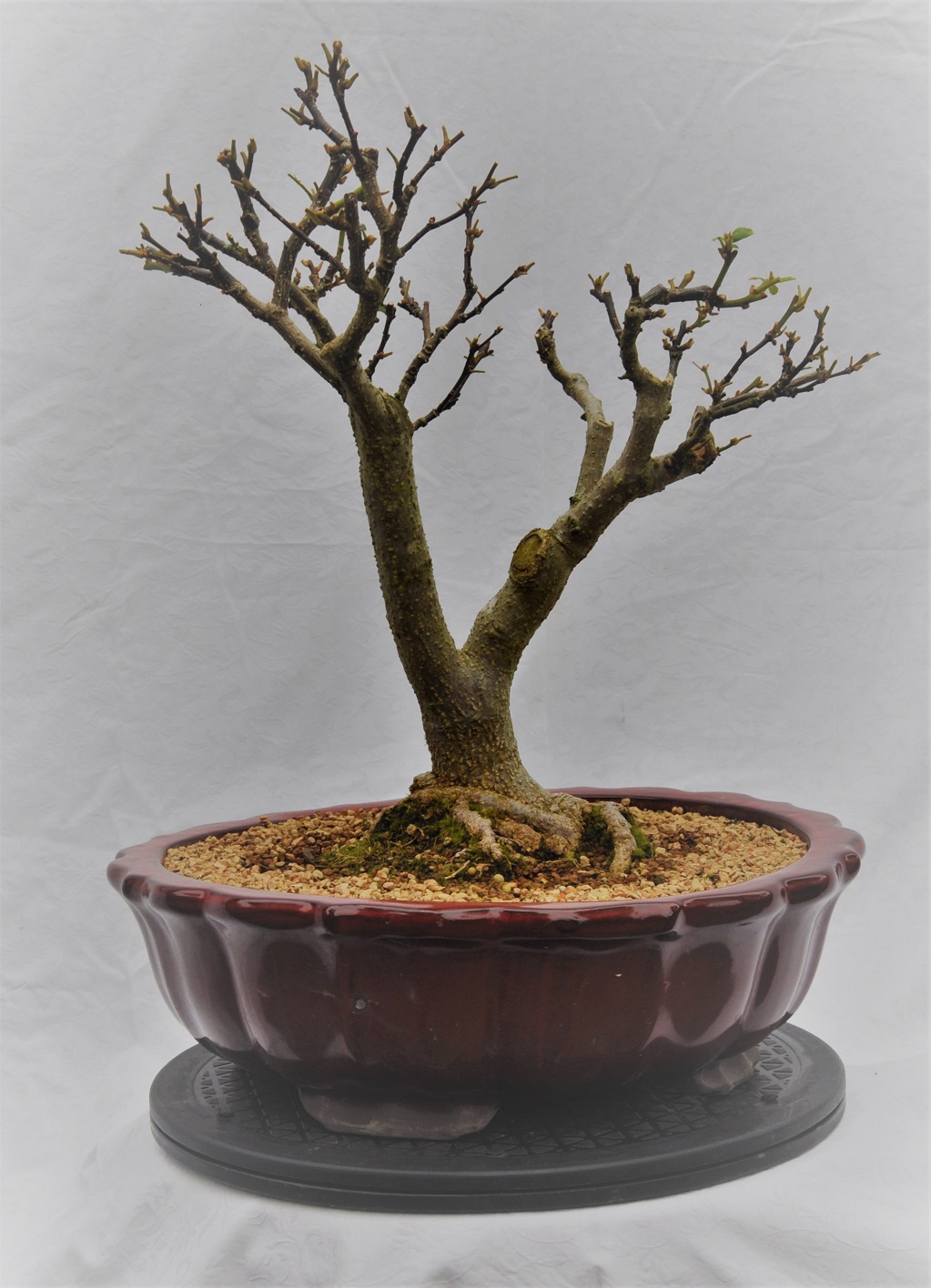 Personally I also get a lot of enjoyment trying to make as small a bonsai as I can. Some plants, automatically scale down the size of their leaves when grown in small pots. Others don't. Paper birch does this to a certain degree. I don't know about cottonwood. I've continue to have the most fun with horsechestnuts as the leaves get smaller, the smaller the plant. 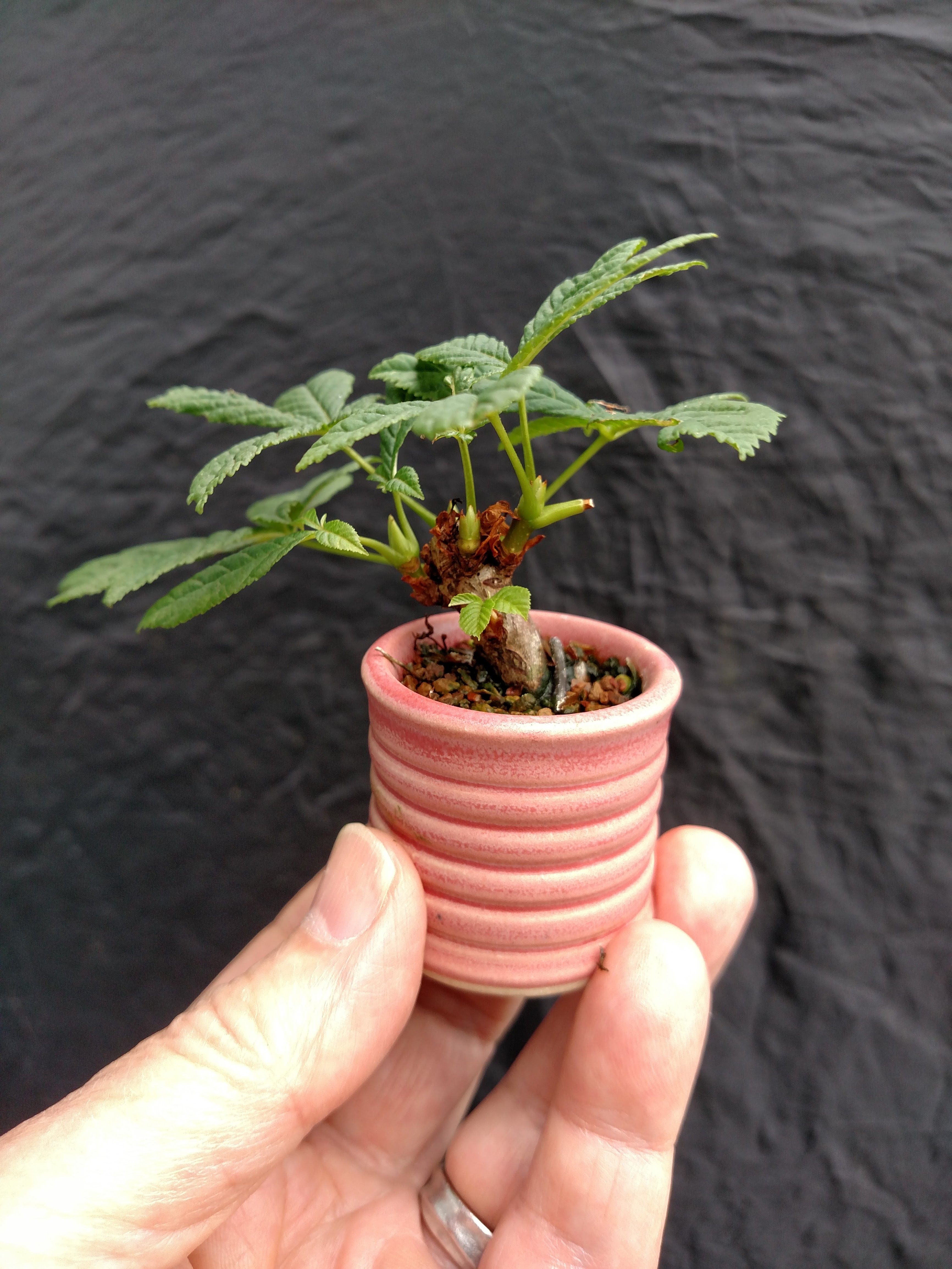 With these, I concentrate on looking for a bud on the stem in the spring (i.e., before the summer solstice) and cutting back to one that potentially will make a more interesting stem - just a variation of the basic game of bonsai.

Again, it all depends on what size/kind of bonsai you aspire to create.

The tree should be root pruned and repotted every 2 years or so. Root pruning is necessary to make a 'pad' of fine roots close to the trunk. Generally, I take the tree out of the pot, clean out the soil, flip the pot upside down, put the tree atop it, using the pot bottom as a template for cutting back the roots. I also cut off downward growing roots so that all are going radially away from the trunk. Then replace it in the pot, atop some soil. The roots must not move subsequently, so I usually run a couple pieces of wire from a drain hole of a nursery plastic pot over the roots and down to a drain hole on the opposite side, turning up the ends. Then I add a final layer of soil atop the bound roots. Alternatively, the tree can be planted a little deeper in the pot and the trunk secured to the pot rim. Usually the roots will have populated the soil adequately that these constraints can be removed after one season.

After a couple of repottings, your tree may have grown enough to graduate it to a bigger pot. When you do, follow the same 'bottom of the pot template' methodology - the new pot is too large if roots are not pruned. Too large a pot will actually slow down the growth of your tree.

7
How do I take care of a Port Jackson fig bonsai?
6
Help identify my bonsai tree
2
Pruning tips for Vietnamese Coriander/Mint
3
Has my Bonsai died?
4
Prune baby kumquat (citrus) tree
3
How can I encourage the side growth of a mango seedling through pruning?
3
cottonwood bonsai?
2
Need repotting advice for my small red maple (hopefully to be bonsai)
4
How to reduce leaf size on Ash bonsai
0
Can a mature pine trunk curve in a few months?