I'm a first time cactus owner. My flatmate is watering it while I'm out on long holiday, and she sent me a picture showing that the spines are yellowing. I've read this can be a sign of old age, but want to double check that nothing's wrong so we can take action to save my plant.

Let me know if this is anything to be concerned about! Thanks. 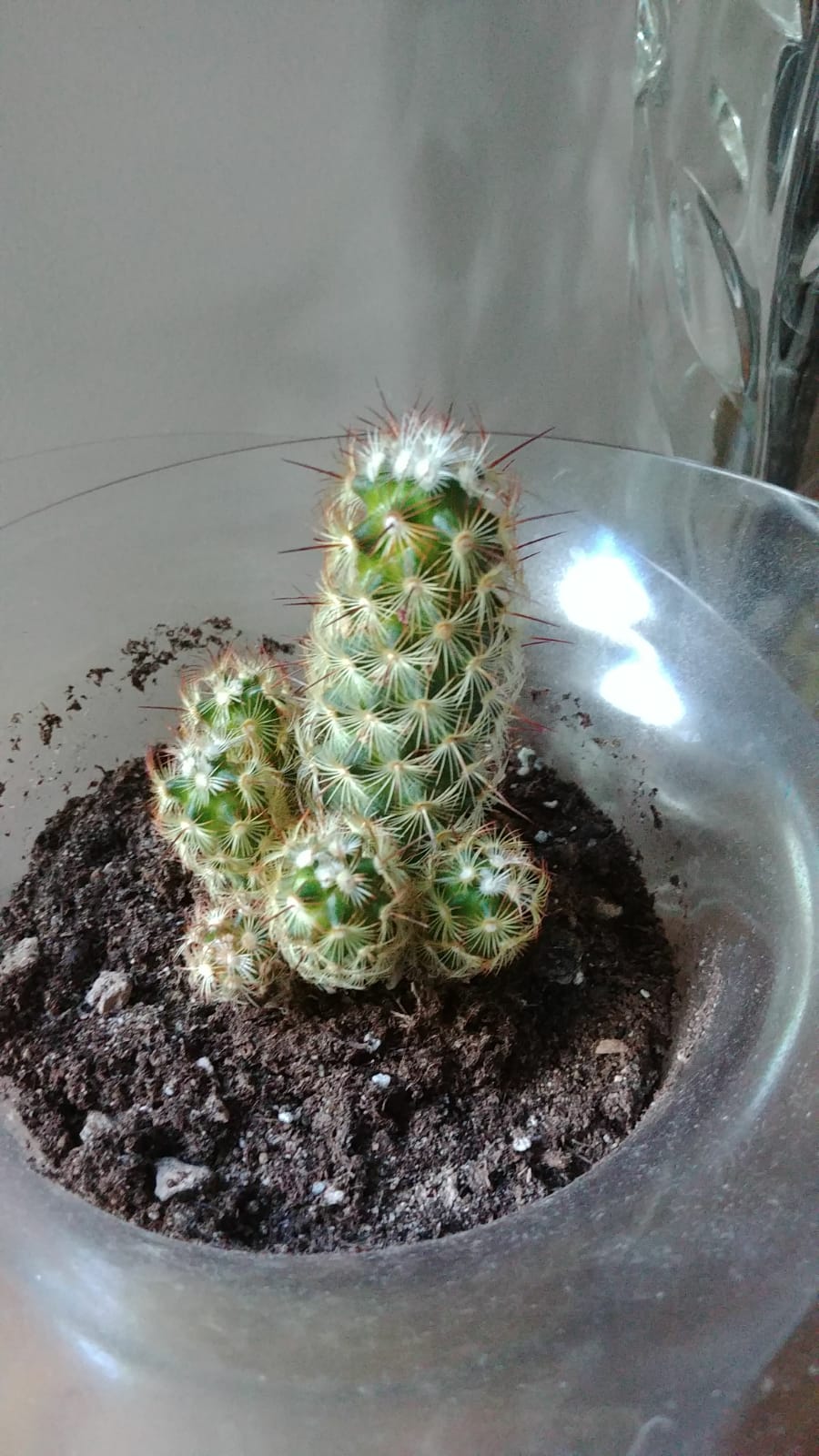 It looks healthy enough to me.

In the UK it doesn't need "protecting" from the sun at any time of the year. Let it "cook" all day in summer if you can - that's what it's natural habitat is like!

The only danger from sunlight is getting drops of water on the plant, which can act as a lens, focus the sunlight, and cause a burn. It's better to just water the soil, not the plant itself. If it gets a bit dusty, immerse the plant and pot completely in a bowl of lukewarm water (but not soap or detergent, of course!!) and let it dry naturally before it goes back into direct sunlight.

Watering regularly in summer is fine, and it looks like it is growing, but you may be over feeding it. Also, go easy on the watering over winter when the light levels are lower than it would like. I don't water most of my cacti at all (in the UK) from the about the end of September to the beginning of March - they shrink a bit as they use up their internal water supply, but it doesn't kill them, and they spring back into growth (and into flower) when the watering restarts.

If you discover that something more serious seems to be going wrong, you can detach some of the plantlets around the base to save them. They will root easily. Don't bury them too deep in the soil when you plant them, and don't water them for the first 3 or 4 weeks after planting - you don't want them to rot before they have started growing! In fact they will usually start to grow roots if you just lie them on their sides on a piece of paper, with no soil or watering at all. As soon as some roots appear, you know they are growing, so you can then pot them up and start watering them. But the best time to start them off is in spring, soon after the "parent" is being watered again and has started growing - not right now when growth is slowing down because of shorter day lengths and weaker sunlight.

It's hard to identify the exact species, and different species grow at different rates, but I would guess it is about 3 years old from being a plantlet like the ones it has produced itself. When they are kept has house plants, cacti hardly ever "die of old age" - its life expectancy should be another 30 or 50 years, at least!

Nice plant! The yellowing spines is normal for that plant. M. elongata has a few different varieties with different colored spines.

As was mentioned above, don't worry about too much sun. Not enough sun will definitely cause issues. I grow these in full sun in Arizona. I would lay off the feed during the winter months, but low-dose fertilizer with every watering during growing season is a good strategy.

The huge concern I see is that it appears this is in a pot with no drainage. I recommend finding a pot with holes in the bottom and find some cactus-specific soil and repotting.

This plant will spread fairly rapidly and the offsets will root readily to make clones.

Not the answer you're looking for? Browse other questions tagged plant-health cactus or ask your own question.

3
Why has my cactus yellowed and softened, and how can I help it live?
7
Why Hasn't my Cactus Grown Deadly Spines?
5
Potted poinciana leaves turning yellow
7
What is this white crust forming on my cactus during the growing months?
3
Young rhododendron with yellow and brown leaves
3
Cucumber plant turning yellow and babies dying
2
What is wrong with my cactus?
2
Is there anything I can do to save my cactus? Thanks in advance!
1
Is my cactus being under watered?
2
Kentia Palm browning leaves and yellowing tips