I grew some good lettuce this year, cos (white seed) and crutterbunch (dark seed). I like the crutterbunch better and it is sometimes tough to find the seed in the store so I made sure to cut all the cos before it flowered and let the other go to seed. No other lettuces local to me within a mile at least. As individual flower heads ripened and showed fluff I picked them carefully and saved some good black/brown seed. It was easy to seive and blow off chaff and from these I saved pretty much 100% good dark seed so I have lots for next year.

I got fed up with this slow process, decided to upscale the production and waited for the flowering head to mature much more and then just cut the whole head with lots of stalk and brought it in the house to dry. After much threshing and drying the winnowing process produced the mix as in the picture: 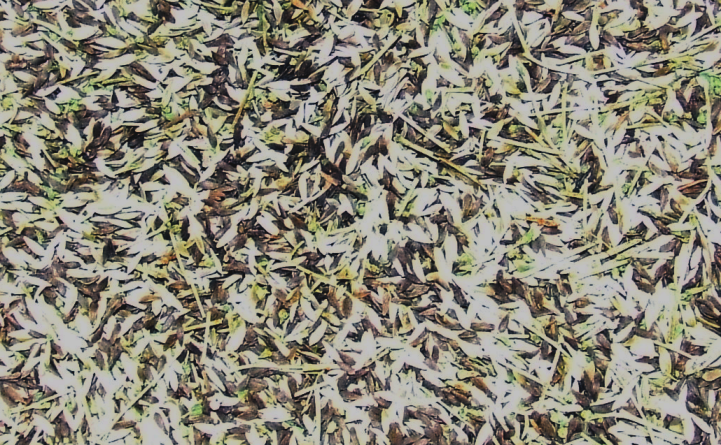 As you can see there is a lot of immature seed mixed in with the fully mature dark seed and a bit of chaff. Quite a different result from the painstaking careful selection of fully ripe.

I'm now faced with how to separate the pepper from the salt. I tried setting up a blower but it did not work, salt fell in the same place as the pepper. Experimenting with water separation (heavy seed sinks, immature seed floats) only works partly and was very messy. I could have waited longer for the heads to mature fully but was trying to be careful not to have lettuce all over the garden next year. For my own use I could also just sow the white along with the dark in confidence that the white will not germinate. But how to separate the white from the dark?

Seeds are rounder and harder than chaff. Pour the stuff slowly onto a smooth inclined board. With a little shaking, you should be able to find an angle where most of the seeds roll down, and most of the chaff stays near where you poured it. Take it slow, and clear off the chaff regularly. It may well take several passes to get good separation. Unripe seeds likely sink in water, or float. The ripe ones likely stay suspended easily. Try a small batch to see. Skim off the float to separate, whichever thing happens. You'll have to dry the ripe seed again, but if you don't let it sit too long, should not get germination. Some such separation protocols call for sugar solutions of different density to aid the separation. I've tried that, but you end up using a lot of sugar to get a sticky mess that needs cleaning up.

Not the answer you're looking for? Browse other questions tagged seeds seed-saving lettuce or ask your own question.

2
NFT Hydroponics for Lettuce
1
Can I grow a new crop of lettuce by saving and planting the whole unopened flower?
4
Will lettuce seeds germinate in summer?
7
Should I cut the top off of this bolting lettuce?
6
How can I tell which lettuce seeds are viable?
6
When to harvest lettuce seeds
2
Lettuce Growth Stunted
1
Should I cover my germinated lettuce seeds?
0
Improving germination with Plasma activated water and lettuce seeds