Why can't I kill bamboo roots with bleach?

This is a follow-up to my first question on the gardening stack exchange. Unfortunately the horrid bamboo continues to plague me this summer. To the point that I'm actually considering packing up and quitting this home: I really wanted a yard with minimal maintenance needs, and now with the bamboo's invasive spread, I seem to have ended up with the very opposite, taking away precious time from the more important things I ought to be spending it on.

A suggestion from the linked post was to apply glyphosate to the ends of exposed roots. Before trying that, I wanted to try a "less toxic" approach because of proximity to kids and carcinogenic concerns. A friend suggested offline to soak the exposed ends of roots in saltwater; the theory being that the saltwater would soak through the root system and kill the plant. I thought to go one step further and try soaking the exposed root ends in bleach, thinking to myself "there's nothing more caustic than bleach - surely soaking a plant's roots in it will kill it." Picture below: 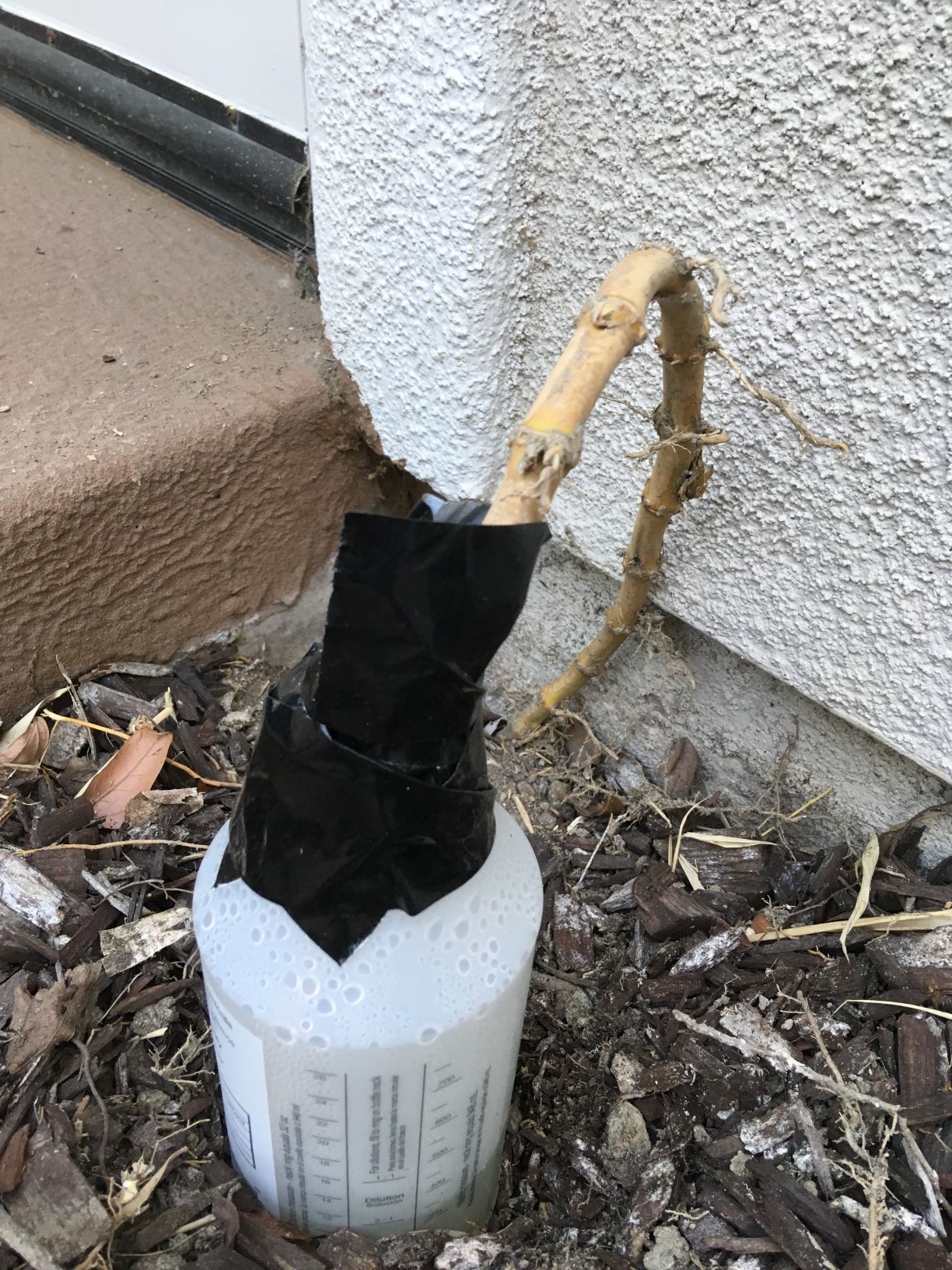 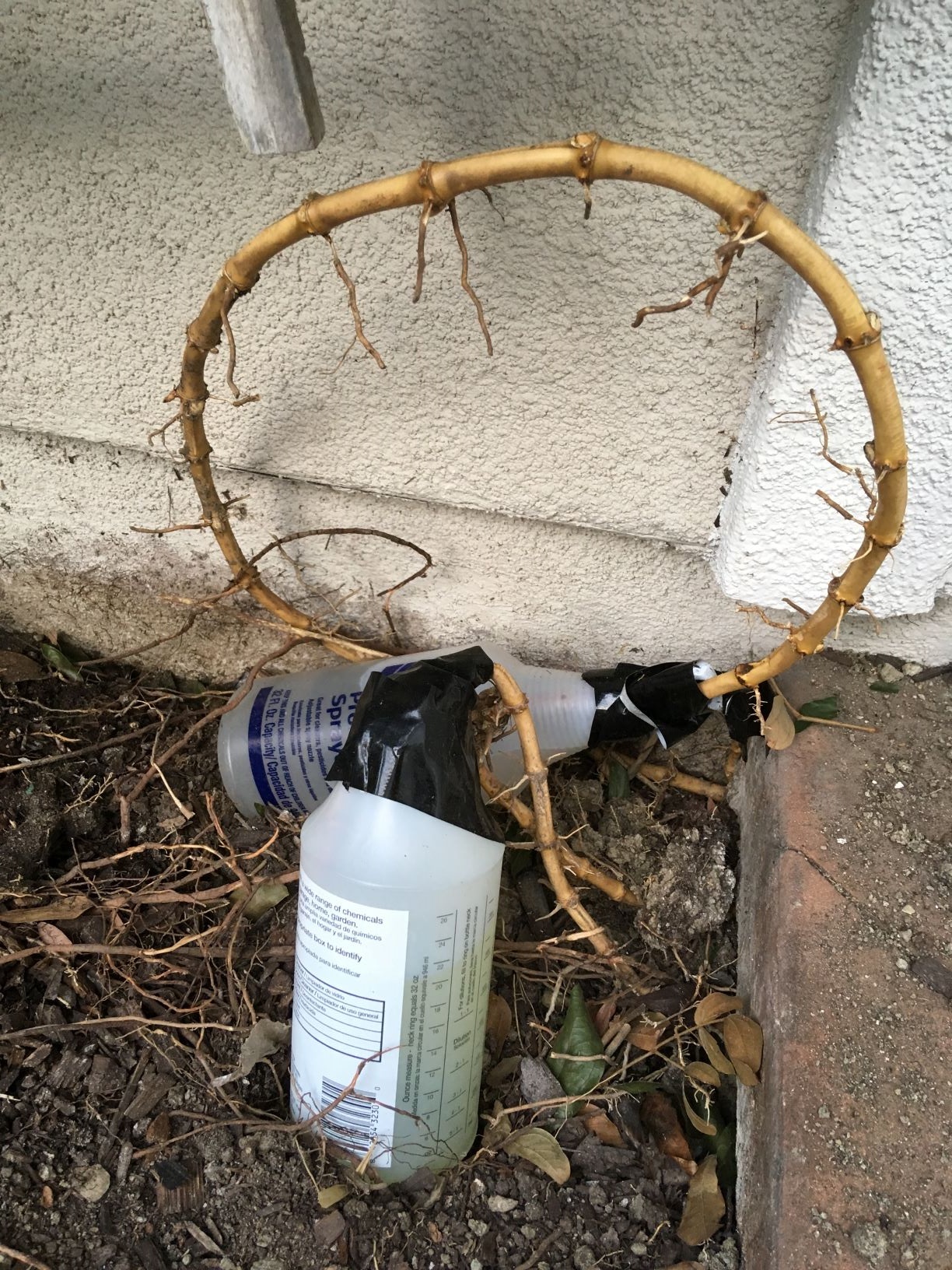 So I filled a couple of spray bottles with 100% bleach, and dipped exposed ends of bamboo roots in it. I taped up the tops to ensure no spillage onto innocent soil. It's been one week, now, that the roots have been soaking this way, and there is no change in appearance to the bamboo roots! I expected some manner of shriveling or necrotization - but there's no change I can perceive at all! So I can't tell if this treatment is having any effect at all.

The reason I'm attempting this is that the root system has grown under the very thick hardscaping that covers most of the area of concern. So it is practically impossible for me to dig up the roots that have grown under in this manner. So I was hoping to find some way to "kill the root system upstream".

So, my questions for knowledgeable gardeners, horticulturalist, and maybe biochemists are: is soaking the exposed end of a bamboo root in a noxious liquid a viable method of killing a bamboo's root system? If so, was bleach a good choice? If so, how long should I continue the existing soaking treatment, and will I eventually see a visible change in the root system so I can know that it's dying? If bleach isn't the right thing to try, is there something else I ought to soak the roots in that will have the intended effect of travelling upstream and killing the root system?

Second, the reason given in another answer (now apparently removed) as to why sodium chlorate was banned in Europe, isn't why it was banned; it was banned because it's a known fire hazard, it affects the ozone layer above the planet but primarily, it's a useful ingredient in bomb making https://www.gov.uk/government/publications/supplying-explosives-precursors/supplying-explosives-precursors-and-poison. I don't suppose I need to say more about that, given the terrorism which exists... it is still available under licence in special circumstances.

The other problem with sodium chlorate is, it works best if you can apply it to green parts of plants, as does glyphosate. It will kill through the roots, but given the rhizomes from the bamboo have run under the hard landscaping, you'd practically have to saturate the whole garden area with it in an attempt to get it to translocate to the rhizomes under the paving, and it would kill absolutely everything else as well. You could try repeatedly applying high strength glyphosate (the sort used as stump killer) to the roots you can actually see, but the trouble is, there's a lot of roots you simply can't get at, and repeated, ongoing treatments aren't something you say you particularly want to do. Fact sheet here for sodium chlorate http://pmep.cce.cornell.edu/profiles/extoxnet/pyrethrins-ziram/sodium-chlorate-ext.html

There is, frankly, no quick and easy answer to this - if you bought your property, there may be some legal recourse with the seller because of this inherited problem. If you are not the owner, it's difficult, unless you can persuade the owner to deal with the problem. Otherwise, apart from calling in professionals to deal with it (they should have access to products amateurs don't), it may be that the only recourse you have is to insert a root rhizome barrier vertically to a depth of 18 inches at the edges of all the paving, which will prevent the rhizomes from spreading past it. It will still be under the paving though, and I suppose it's possible it may appear between any cracks that exist, or possibly through the grout if there is grout between pavers.

In response to your comment - glyphosate might work if you spray green regrowth, but to be honest, I doubt it will kill all the rhizomes under the hard landscaping. There is information here https://homeguides.sfgate.com/weed-killer-bamboo-49276.html which gives proposed methods of dealing with it - herbicides that kill grass might be as effective as glyphosate, but whatever you use, the link makes it clear that it will be an ongoing treatment programme over some years, and that's for bamboo with accessible roots. As I said, a difficult problem to solve quickly...and why I suggested using root rhizome barrier. Bamboo is the gift that keeps on giving, whether you want it or not...if one of the many varieties which run is planted. There are, though, a few that simply form clumps and don't run in this way.

I can appreciate your situation. While I do not have bamboo, I do have milkweed, mares tail and various thistles to contend with in an open garden which to some extent present a similar problem. They are extremely persistent; they set up deep underground networks and seem to communicate with each other, sharing ideas and nutrients in their duty to expand and prosper. Hitting the growing ends is only partly successful; they have the ability to remain in a sort of stasis, waiting for a new opportunity to exploit resources. They have thick fleshy roots that are capable of storing food over long periods and can survive drought and heat better than other shallow rooted plants.

I don't see that the root tissues have any incentive to move the poison from the cut ends through the tissues; what is doing some good is to expose the root hairs which will have a desiccating effect.

First rule I think is to deny the root system every opportunity to photosynthesize and make additional food. If we can be sure of this then we know it is in stasis. The root system then transfers resources to the most likely place that it can expand. I sense that in your location (unlike mine) you can box the critter in - if there is no sign of shoots then any roots that appear must come from transfer of resources, and by continuously removing those roots you must be depleting the entire system.

Your exposition of the problem sounds very logical and I have tried to present a logical solution that I'm sure you can appreciate. Let us know where my reasoning is leaky.

You cannot kill bamboo roots. Take it from me. My house was surrounded with 7 different types of bamboo on a very small lot (thanks to ex husband). I have literally had to rent an excavator 3 times to get the entire root system out. Sometimes the holes it left were 6 feet deep. Finally, I thought that I was through with it, since we treated all the holes with a weed killer before filling them in. Today, I've just found another 2 bamboo shoots coming up on my paved path!!! Guess it's time to rent another backhoe. It's the only way!

4
How do I naturally eradicate a stand of invasive bamboo?
4
Soil nutrient replacement, bamboo question
6
Any problems (plant health, structural longevity, etc?) with planting bamboo in a steel planter?
5
How to eradicate bamboo from suburban SFH?
0
Did the Texas winter storms kill off my bamboo and shrubs?