Do I have wood chips or mulch, and why do I want it? 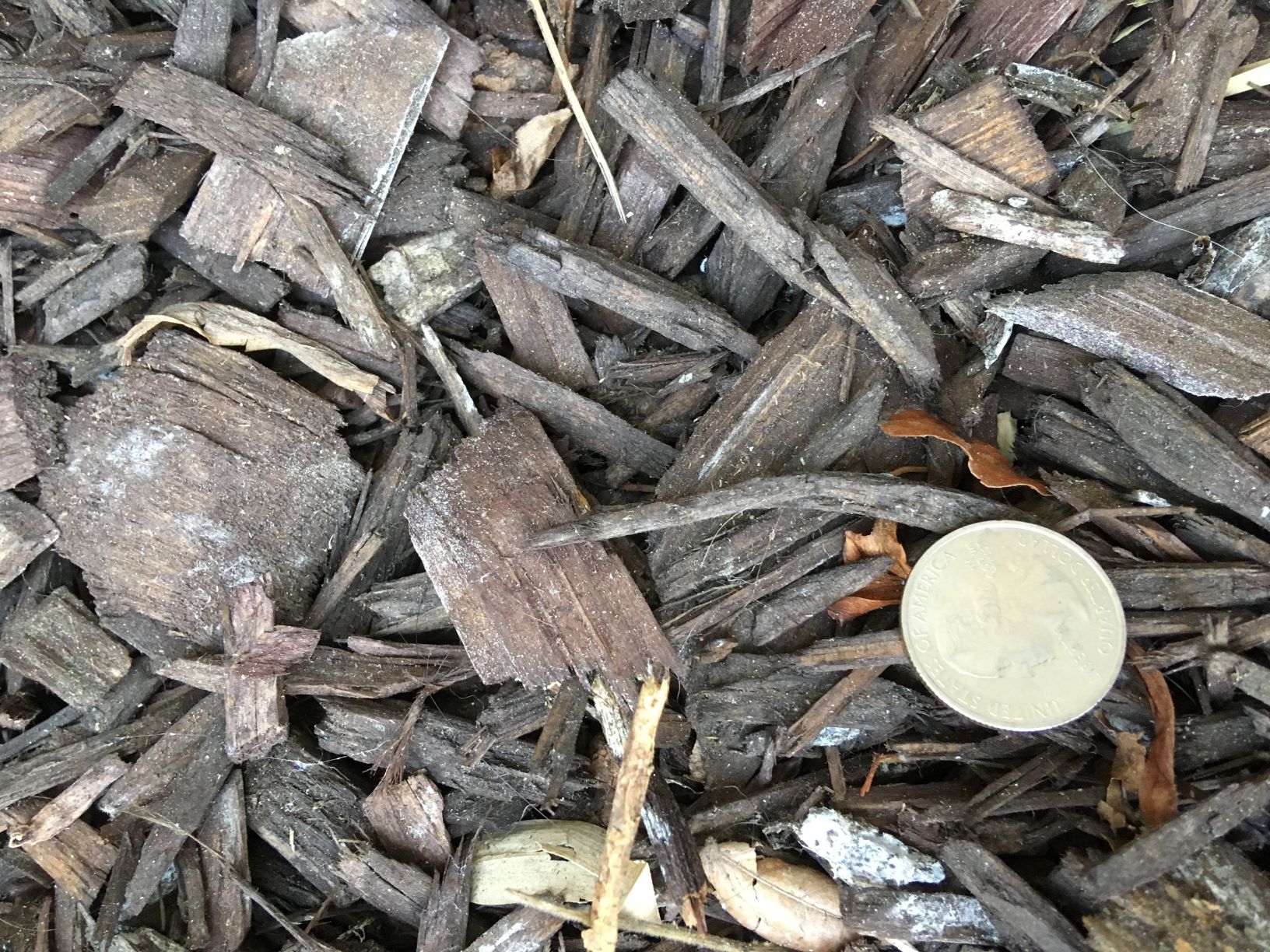 I'm a first-time homeowner and pretty naive and often overwhelmed by home-related upkeep, especially related to gardening (see my very first question on this exchange for what still continues to vex me).

So, my question: from the picture above, do I have woodchips or mulch? (That's a quarter in the picture for scale reference) Either way, why is it used? It was all over the lawn in our front yard and the small pockets of exposed soil in our mostly hardscaped backyard. I was never a fan of it - I kind of prefer lawns with just soil. But before trying to get rid of it, I wanted to learn if there is an actual use for it - or is it just an aesthetic choice?

I live in Orange County, California, so summers are fairly hot (80s - 90s F) and will occasionally get humid, but is mostly dry, and winters are mildly cold with relatively little rain.

Well technically they're wood chips, but also a mulch, although they look pretty awful - they're not even proper bark chips. I can only guess why they were all over the lawn, but I live in the UK - is it possible that people who live in hot, dry regions of the USA strew wood chips over their lawns when the weather is particularly hot? I can't imagine it would do the grass much good, but perhaps there is a reason for it - and maybe someone from your area (either on here or a neighbour) might tell you.On the other hand, the chips might just have been spilt over the lawn - it's certainly not usual for chippings to be in such a place.

In regard to mulch, mulch is just a term for a layer of something over the top of soil - it might be organic (composted manure, leafmould, bark chips, anything that rots down over time) or inorganic (pebbles, chippings, slate and the like). Even the layer of leaf litter in forests is a mulch, and a layer of shredded paper or cardboard spread over the soil would also be a mulch.

The advantage with a good organic mulch applied to beds and borders at least annually in spring is, it keeps moisture in and reduces 'baking' of the soil from hot sun in summer - it also improves the ability of rain to penetrate the soil instead of running off when there's a sudden downpour. As it breaks down, it improves the soil, raising the bio diversity within it, thereby improving fertility. Some mulches break down quicker than others - good garden compost or composted manures will be taken down into the soil much more quickly than lumpy bark chips, but the more organic material placed in or onto soil, the better the soil will be, and the better plants will grow. Finally, mulch is sometimes used as a weed suppressant - but that would need to be a layer a mininmum 2 inches thick, and preferably more.

If you do decide to mulch, always remember never to pile it up against the woody trunk of a tree or shrub. If you apply a thick layer of mulch as a weed suppressant, leave a clear inch or two at least all round the woody trunk or stem. And never use fresh wood chippings - they're best composted first.

What you have in picture are wood chips and if you use them in certain way, depending on what you want to achieve - they will become mulch.

Mulch is just a layer of material applied over surface/soil. It could be organic (such as your wood chips, leaves, straw, nut shells, paper...) or artificial (like nylon, plastic sheeting...).

You can use mulch to retain moisture, improve soil, prevent weed growth or just improve appearance.

You can find more about Mulch at Wikipedia

do I have woodchips or mulch?

That is mulch made from chipped wood. The mulch may have been dyed for aesthetic purposes.

why is it used?

The previous owner may have applied mulch because it's a cheap and quick method of improving the landscaping and curb appeal, at least in the listing photos.

The climate of Orange County is characterized by high temperatures, low humidity, and few clouds. Mulch keeps moisture in the soil. Without mulch, new plants in full sun would require daily irrigation to survive the first summer.

Irrigation is the single biggest use of water in a suburban house, which is a problem in drought-stricken California. In 2015 and 2016, many communities offered "cash for grass", i.e. incentives to remove lawns. Your water supplier may have made free mulch available as a water-saving program.

Not the answer you're looking for? Browse other questions tagged mulch or ask your own question.

8
Effectiveness of Using Wood Chips (a la “Back to Eden”) as a garden mulch/covering?
4
Can I cover mature tree roots with fresh wood chips?
3
Pros and Cons of wood vs stone mulch
5
How to effectively remove wood chips from the garden?
3
Using Pine bark mulch and Cedar mulch together
2
Are walnut tree chips suitable as mulch?
0
Wood chips instead of rock mulch for a cactus garden
1
Can gravel be used beneath wood chips for weed control?