What is this plant with red blooms and apparently six petals (diameter of blooms: approx. 2-3 cm; location: Central Europe)? I find it quite attractive in its hanging pot. 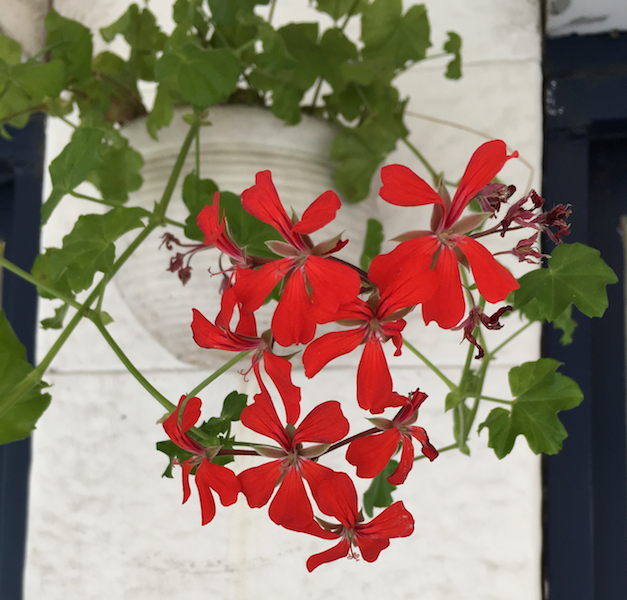 It's a Pelargonium (common name: Geranium). Based on the leaves and habit, a hanging variety (sometimes also called an Ivy Geranium). I don't recognize the variety; typically the flower clusters are tighter than the ones shown.

It is indeed a Pelargonium, but judging by the flower form, I think it's what's commonly known as a Cascade Geranium, proper name Pelargonium peltatum, although its flower stems seem a little long for that variety. Useful as summer bedding in hanging pots and window boxes because of their 'cascading' habit, they are generally smaller and tidier in growth habit than ivy leafed (also known as trailing) pelargoniums, though they have a similar leaf structure; the flower form is more open and lax when compared to the flowers on other pelargoniums. Images here https://plantsgallery.blogspot.com/2012/06/pelargonium-peltatum-cascade-leucht.html

6
What is this white-and-purple, five-petaled flower?
3
What are these yellow, eight-petal flowers?
4
What is this horizontally growing weed with blue flowers?
3
What is this bright yellow daylily with six narrow petals that curl at the ends?
4
Plant with purple blooms that close each night
1
Flower with small, intensely blue blooms
5
Orange-red flower with extravagant shape
3
What type of Mimosoidea is this?
2
Identification of plant with quick growing oval leaves, red flowers and pea-like seedlings