Is it sensible to do composting in a grow bag or pot which already has plants planted in it?

I've taken a half liter soft drink bottle, cut off the bottom portion of it and created holes at the bottom and created top-vents like the ventilation that pipe composting needs. 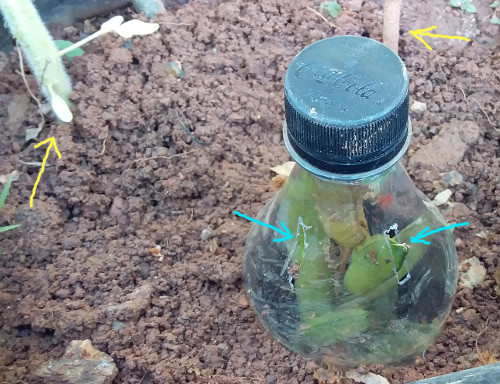 The blue arrows show the air-vents and the yellow arrows, the plant stems. The picture I've shown is that of plants growing in a grow-bag. The contents inside the bottle are empty pea pods and tomato skin which I hope will be disintegrated by microbes, fly larvae and two earthworms that are already in the grow-bag soil. I took care not to hurt the roots of the plants, and this plastic bottle is protected from rain and direct overhead sunshine.

I did this, considering it'd be easier to allow the compost to form within the soil and automatically seep into the soil, rather than have to buy fertilizer and mix it into the soil or have a separate composting system which I hear can create quite a stink.

Questions:
1. Is this sensible to do? Are there any disadvantages of doing it this way? (one of the reasons I've asked here is being worried about hygiene and this setup affecting the plants somehow)
2. If it isn't sensible, can the existing apparatus I've used, be improved in any way?

Nav, you have been doing a lot of thinking! Interesting but there are a few problems.

First is compost in any form is NOT fertilizer. Depending on what it is it might have bits of nitrogen left and bits of micro chemistry but it is not to be used as fertilizer. Compost is also never to be used in place of soil. Compost should never be used in indoor plant's potting soil. Even in greenhouses.

Compost does best in larger quantities. More uniform heating, easier to turn with a pitch fork to aerate so that it doesn't become anaerobic and stinky. Stinky is H2S given off by anaerobic processes, not manure. Easier to cover when you have a down pour. Compost is also made up of different materials; green and browns. Both have different 'jobs' in a compost pile. Finely chopped materials more or less layered will decompose faster than what little you've got in your jar.

Anything once alive and now dead, decomposes unless it is buried in ice. There are organisms as a group called 'decomposers'. They are in the air and in all soils, even sterilized potting soil.

These organisms use nitrogen as an energy source to do their job of decomposing. Any nitrogen in the compost bin is being used for energy to decompose all that non decomposed organic matter. Earthworms eat some non decomposed as well as decomposed matter as well as soil and when it all comes out at the end they call it worm castings. Nice stuff for the soil but as fertilizer.

Here is the rest of the story. Once there is decomposed organic matter sitting on the surface of the soil it is like someone put out a neon sign saying, "great eats here for all"! Except the decomposers because they use nitrogen.

This decomposed organic matter feeds all the micro and macro organisms in the soil. While waiting for the decomposers to do their job, all of the soil organisms wait by going dormant, dying, stop reproducing until there is decomposed organic matter at the surface. Then the macro and micro soil organisms come up and eat and then go back into the soil (4 - 6" avg.) and poop the DOM for short, out, mixing it into the soil for you. While the organisms are active, eating, reproducing they are making wonderful soil with great 'tilth' for plants and plant roots.

When your compost pile (s) look like uniform, crumbly dirt and a person is no longer able to discern what the original ingredients were, the role of compost is to be shoveled into a wheel barrow and dumped on the soil of your plant beds. If thick enough (1 - 2") this will inhibit weed seeds from growing as well as smother little weeds. I never worry about weeds. Never. Compost is great stuff but you would be far better off by making one or two or three compost piles/bins and waiting until it becomes decomposed to dump on your garden soil.

As it looks to me now, you are also putting up a sign for good eats for all the rodents and raccoons and possums. What are we looking at in this picture for soil? You said grow-bag soil. Is this sterilized soil? Avoid potting soil with water holding gimmicks (sponges or gels) and added fertilizer. You want to be in strict control of what fertilizer you add and how much. "Less is Best, More is Death and None is Dumb" where fertilizer is concerned. I also throw cheap alfalfa pellets in with my compost. Great nitrogen source to feed the decomposers and hurry things up a bit.

Purchase a fertilizer with 3 numbers for N-P-K. For flowers and vegetables make sure the N is the LOWEST number of the three or at least equal such as 5-5-5 or 3-5-4. Use half of what they recommend. You'll soon be able to tell when your plants are lacking something or even have too much of some chemical (I don't call fertilizer nutrients because plants use chemistry to make their own nutrients, their own food for energy). I recommend Osmocote 14-14-14 extended release for newbies, one application per growing season. Dr. Earth's 5-5-5 All Purpose Fertilizer, totally 'organic' thus extended release 'naturally' worked great for me this year. Growilla 2-5-4 is what I use mid summer. Comes with great micro chemistry and bacteria and fungus.

I am not sure if this is a science project or what but the scale seems small. You can buy compost if all you need is a small amount for your grow bag. You are only going to have problems with smell if you are developing large quantities of compost and even then the smell would depend heavily on the type of material you are putting into your compost pile. In other words, a few empty pea pods and some tomato skins aren't going to stink up the place. Usually, the stink of a compost pile comes from using animal manure and the only reason you would do that is to skip some of the time it takes for organic matter to deteriorate. Which, in turn, would suggest your developing large amounts of compost for sale or use in the fields and such.

Not the answer you're looking for? Browse other questions tagged compost fertilizer or ask your own question.

18
Which plants/trees will benefit from using urine as a fertilizer?
7
How do I change the soil on already planted plants (not in pots)
8
What studies / evidence is there that Bokashi tea actually has extra nutritions for plants?
6
How to speed up composting of large amounts of leaves inside plastic bags?
3
I've read that composting can reach up to 140 degrees - does this affect my plants?
2
There is this strange white growth around the outside of my pot plants