I've been growing cucumber plants from seed this year and everything was going fine until I started trying to move them outside when they were about 8 inches tall. I was acclimating them to the outdoor conditions along with my tomato and pepper plants by placing them outside for a few hours each day, but I always found that the cucumbers wilted by such a large degree when they were outside that I got scared and moved them back indoors after an hour or so. The other plants were fine.

I ended up moving the cucumber plants straight into the greenhouse a few weeks ago, and since then they've gradually got worse and worse, with the leaves becoming very floppy and wilted, followed by the young fruit wilting, and now the entire stems are buckling and collapsing to the soil level. Meanwhile, I kept two plants indoors that were, up until that point, treated identically to the outside plants, and they're thriving (or, at least, not dying).

I'm fairly certain that they have had sufficient water, and the temperature hasn't dropped below about 5°C here since they've been outside, however I forgot to poke holes in the bottom of the plants' growbag, so they spent the first couple of weeks with no drainage. At no point did the soil appear to be saturated, though, and I've since cut some drainage holes about a week ago, but the plants have only got worse.

Does anyone have any idea what I've done wrong? I'm really quite baffled at this stage...

For reference, the seeds I sowed were shop-bought Cucumber Amanda F1 seeds, and I've included photos of both the wilting and healthy plants below. 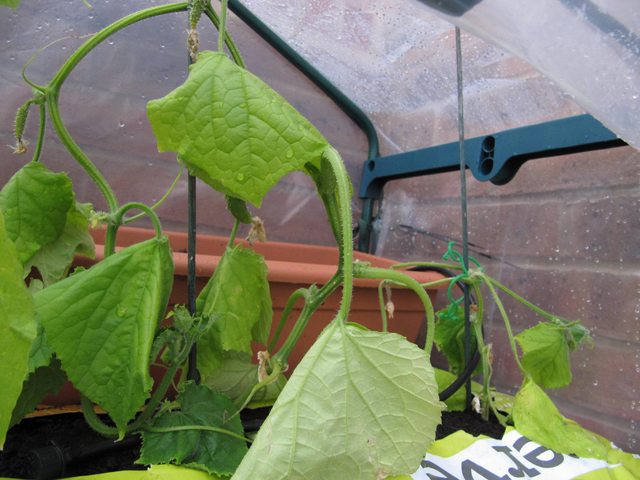 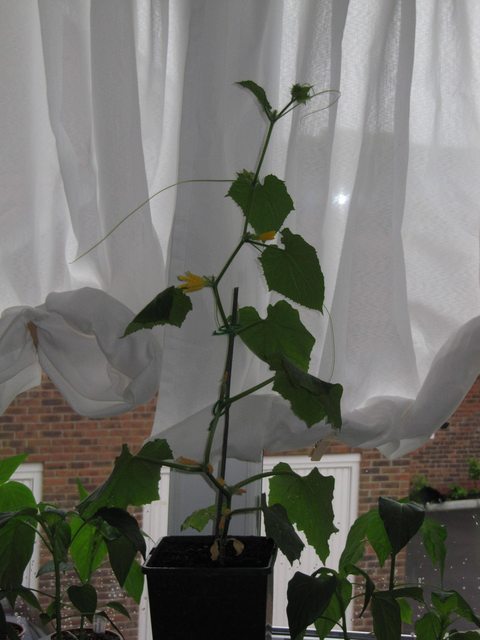 You hear often that squash/cucumbers/melons/pumpkins don't like to be transplanted, for several reasons, one of which is that they are very delicate, in that they are very soft and vascular, if any of the vascular tissue gets pinched or stretched or broken, it can lead to dessication. Good luck, plenty of summer left if you want to direct sow...

+1 to @Grady Player's answer: damage is probably the cause. You've likely damaged the roots or vine, possibly in a way you can't see.

My advice would be to throw away the wilting/damaged plants and start over by planting in the place where you want them to finally grow, and then don't move them.

Or: (I haven't tried this approach yet, but I am this year), if you want the plants to germinate inside so you get faster/better germination, set them out immediately after the seeds sprout. I'm going to use soil blocks so that there's very little chance of damaging roots or vines. (I'll come back and edit this with the results...)

If exposure to cucumber beetles is a possibility, then it may be bacterial wilt, for which there is no treatment. The test for this is to slice off the stem of an infected plant and squeeze out some sap. If it's stretchy/slimy, it's wilt.

I think this is a problem in the UK too, but I'm not certain.

We've lost a lot of cucumber plants to this, but always much later in the season.

Identical problem in the greenhouse here. I suggest you eliminate any suggestion of draughts. Worked a treat for me.

Update: I was wrong. It wasn't the draughts. By coincidence I happened to drape some net curtain in the greenhouse, shielding the plants from whatever weak sunlight there is. Bingo ! They revived in 24hrs.

If your house was made of glass or plastic and you hardly ever opened a door or window you would wilt like your cucumber plant.

Do not try to compensate with watering because cucumber plants don't like to stand in water. If you have them in a tray and water the soil, not the plants' leaves.

And please remember cucumber plants like HEAT not sunlight; you will burn the leaves and they will go crispy.

I also have the same problem with my cucumber plants wilting. My plants were really happy indoor until I decided to suddenly move them out. The leaves are really weak like you said. I also think it might be because of the heat and because of overwatering as I too have had the same problem but after cutting down on the water and placing them in a shadier and hotter spot they seem to be recovering

I had pretty much the same thing happen last year. I think I just kept them indoors way too long before transplanting (they were huge and I even got a fruit before transplanting). I think that's your problem, too. I'm not sure the ideal size to transplant, but I'm pretty sure eight inches is too long. After that, I just direct-seeded new seeds outdoors and they were fine. Granted, I should have used heat/drought-tolerant varieties.

Not the answer you're looking for? Browse other questions tagged wilt cucumbers or ask your own question.

12
How can I revive wilted water basil plants?
4
What are these white spots and wilting leaves on my cucumber seedling transplants?
7
What's causing my cucumber & melon vines to wither away?
5
Squash plant wilting bottom up?
10
My transplanted seedlings are all dying!
5
Cucumber with bacterial wilt, what to do to save other plants?
3
What are these white irregular sized spots on my cucumber and melon plants?
2
What can I do to help root-bound cucumber plants?
2
Are these spots on cucumber plant leaves from insects?
4
Wilted cucumber plants; watered during the afternoon