I received two unidentified types of mints and for some time have been wondering what they are. I included pictures of them below, but I also would like to learn to identify the different varieties myself rather than merely ask someone else each time. Does anyone know of a good resource to learn from?

Here are the pictures. The first mint flowered, but the too-tall stem fell over in a storm and much of the flower has since fallen away. 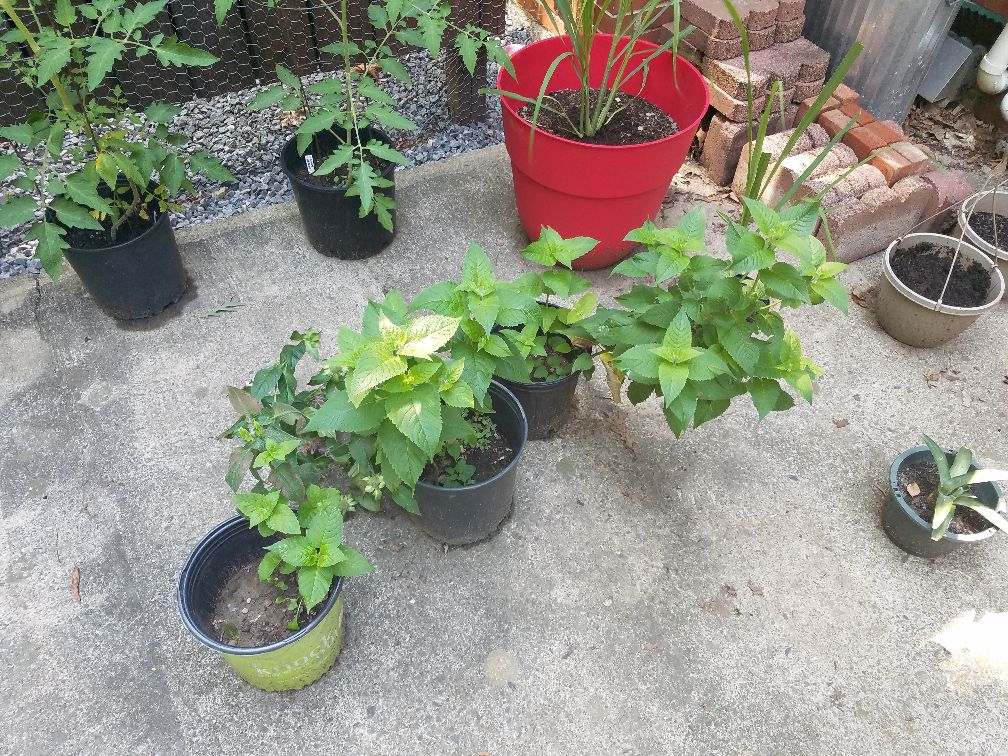 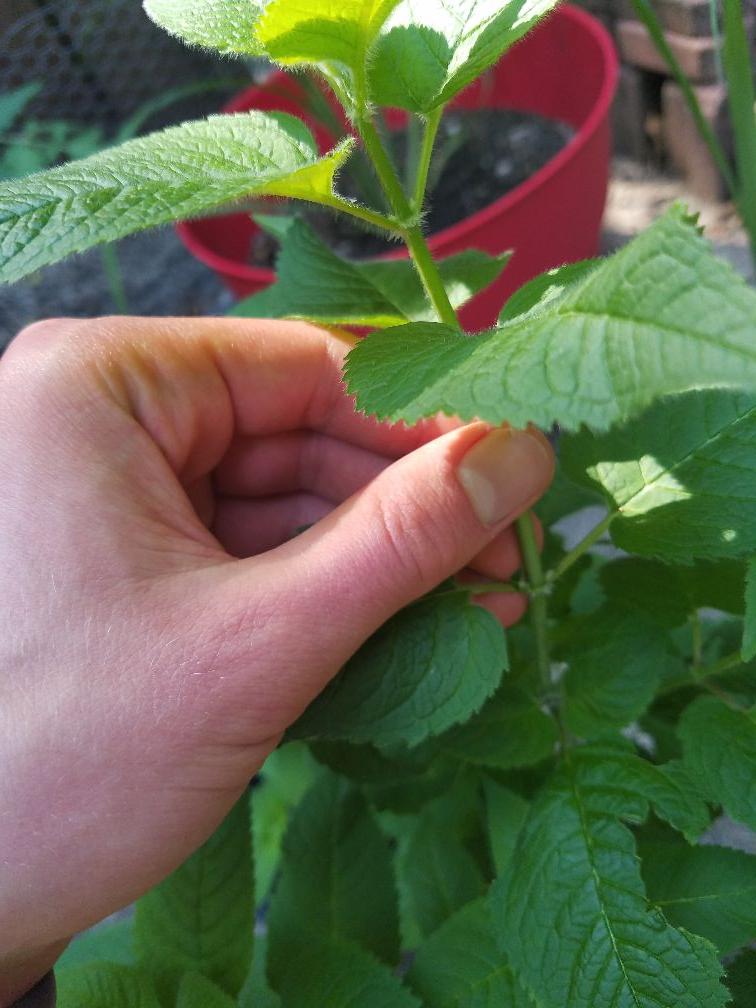 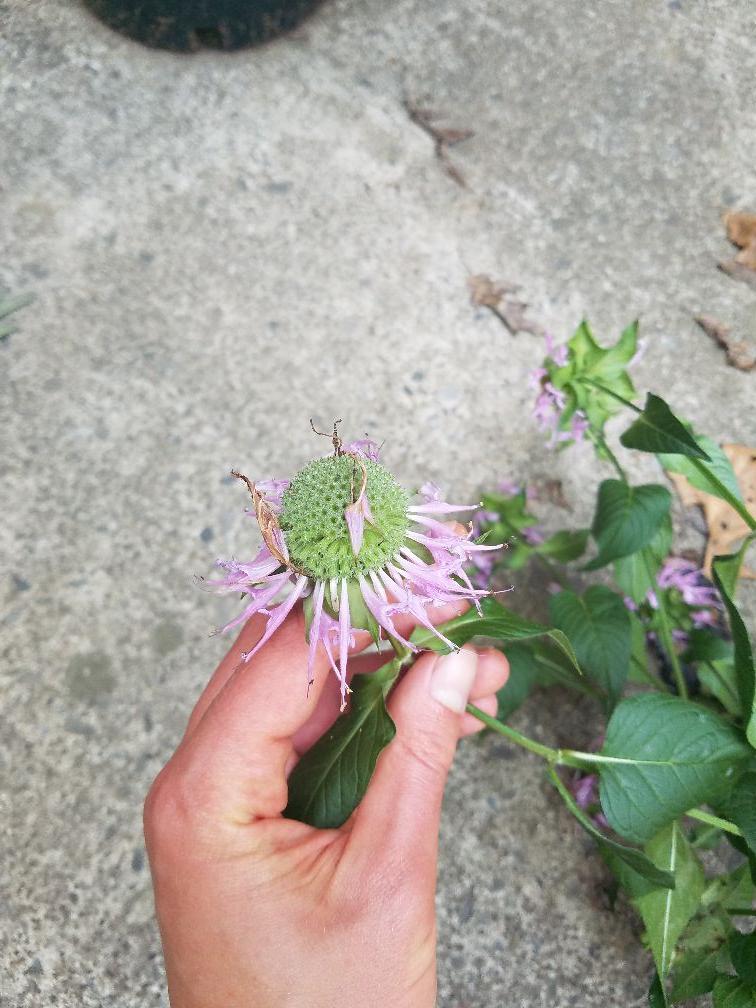 The second mint has yet to flower, but it's flourishing. 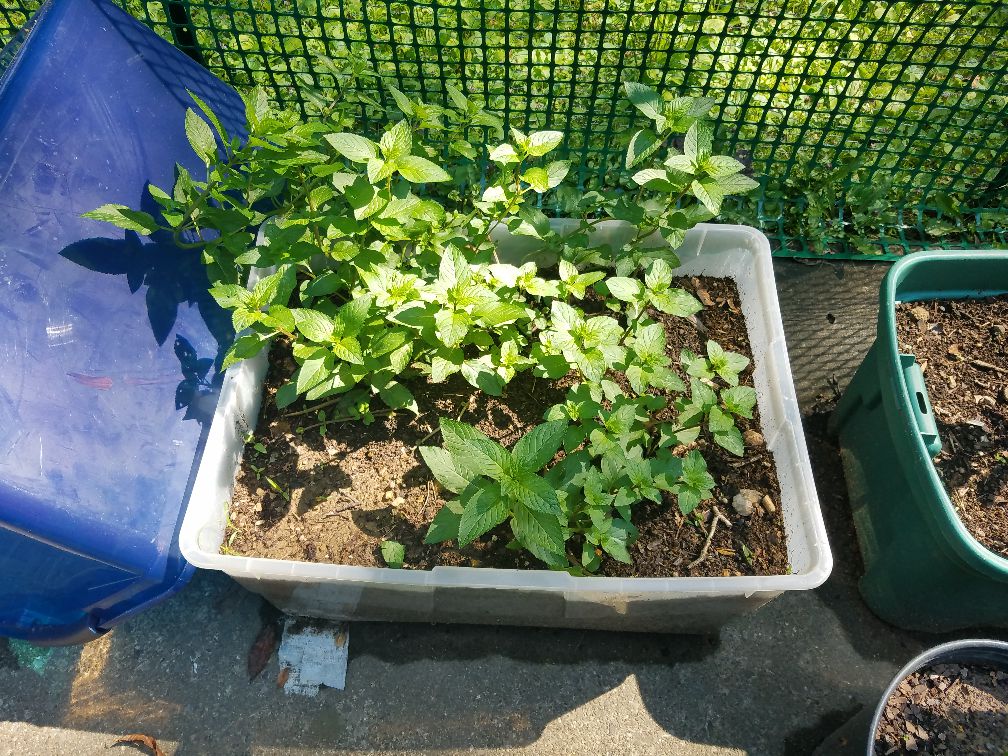 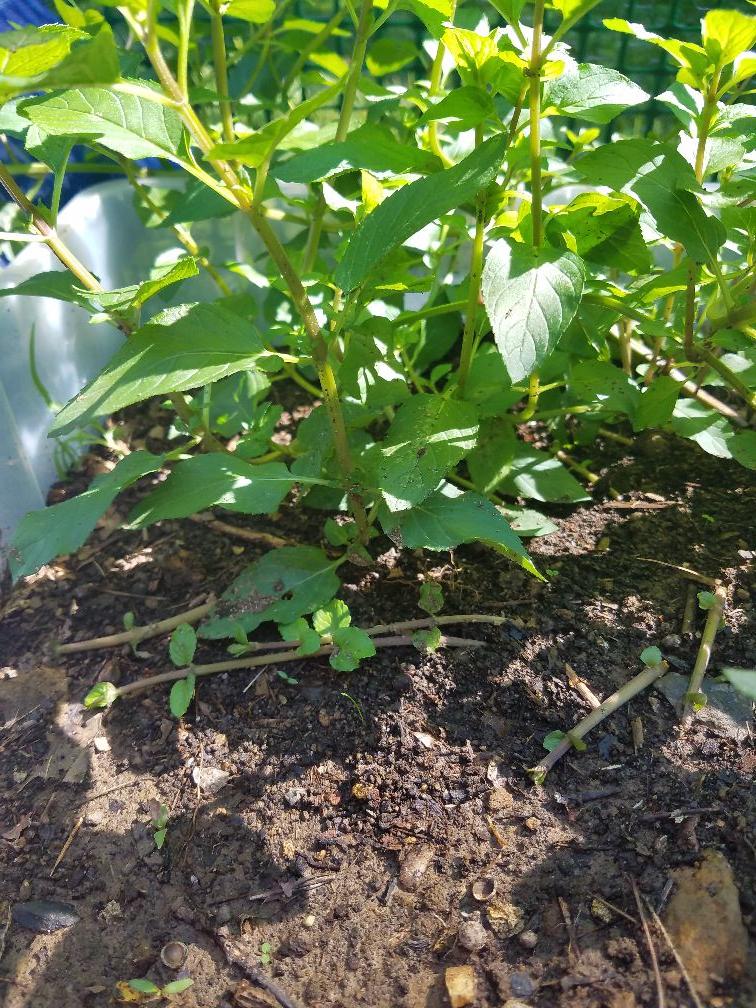 I've also seen other mint varieties around town and been left wondering what those are as well, so I would definitely like to learn to identify these myself in the future. I haven't tasted either yet because of my next question...

Are all varieties of mint safely edible? I recall hearing in the past that I should steer clear of catmint because it can cause irritability. That was for humans in general, but I specifically am on an antidepressant. I know I need to avoid St. John's wort for that reason, for example. Are any other varieties of mint potentially unsafe to eat? Do any others have possible side effects?

Lastly, I have a question on rhizomes and surviving the winter. My understanding of mint's strategy to survive the winter is that when the above-ground stems die off, the plant is essentially retreating into its rhizome, from which it will sprout again when the weather warms. I have a root cutting of lemon mint which has no rhizome, so I wonder if that means it won't be able to survive the winter. I live in central Pennsylvania on the very edge of zone 6b, almost 6a. Is my understanding correct?

Thank you, everyone, for your help!

The first mint (as shown in the third photo) is Monarda fistulosa or one of its hybrids (common names Wild Bergamot or Bee Balm). I think it's the species, though. It's a North American wildflower and like most mints, spreads rhizomatously. it can also seed heavily as well. This site contains a number of medicinal uses for the plant: https://en.wikipedia.org/wiki/Monarda_fistulosa, and I'm sure you can find many others.

As for how to identify a mint, the first step is the stem - if it's square, then it's in the Lamiaceae family, which technically makes it a mint, but I would say that most of the members of that family are not considered to be actual edible/medicinal mints. The next steps would be to look at the form of the plant (tall? short? coarse - like a bergamot - or relatively fine - like a catmint?), habit (well-behaved like a coleus, or rangy like most other mints?, and flower type (all flowers are "lipped", but does the flower look like a catmint or more like a rayed flower? what color(s) are the flowers?).

For a different family, the questions you'd ask to ID a plant may be similar but not necessarily the same.

I identified this plant by leaf, form and flower. Had the flower been a very pale pink and the leaves tinged with red, I would then have had to look at the habit, because it could've been a different, non-spreading species of Monarda.

A good way to learn is to find a nearby plant nursery that carries a ton of different species of plants and/or a botanic garden. Visit it, paying attention to all of the details for the family you want to learn. A good reference book helps, too, of course.

The genus of plants which comprise edible mints are known as Mentha, and they belong to the Lamiaceae Family. There are many plants which belong in the same Family (Lamiaceae) such as your 'catmint', but they are not necessarily edible, although people might commonly refer to them as mint or mint family (even though 'mint family' does not exist). 'Catmint' is more usually referred to as catnip, and is a common name for Nepeta faassenii; it is not used for culinary purposes. Monarda (also a member of the Lamiaceae, common name Bergamot or Bee Balm) is sometimes used in food or as a medicine, but it does not have a minty taste because it is not a Mentha. The family Lamiaceae also includes, for instance, Lamiums, such as Lamium purpureum - they are edible, but again, are not Mentha and so are not minty tasting and are usually used as ornamental plants in the garden.

It is important that you know the Latin or botanical names for your plants rather than just the common names, or you might end up eating something you believe is mint that isn't mint at all, or which might actually be toxic.

In regard to varieties of Mentha, there is much argument botanically about the naming of various mint plants, see here https://en.m.wikipedia.org/wiki/Mentha. As you can see from the link, many are named (some common names for named varieties are chocolate mint, lemon mint, spearmint and so on) but there is still confusion about different varieties.

In terms of growing mints, they rapidly outgrow a pot - their nature is to put out long rhizomes under the soil, and to pop up a foot or three away from the site of the original plant. Obviously, this is not possible in a pot, and so the plant struggles within a few months to produce any useable leaves. That necessitates a lot of unpotting, dividing and repotting of the sections in order to keep up supplies of mint leaves for culinary use.

If you want to plant mint direct into the ground, then a root rhizome barrier inserted to a depth of 18 inches around each plant should prevent it spreading throughout the garden, but each plant should be given plenty of space within the enclosing barrier, say 2 or 3 feet square. Even so, after a couple of years, it will be necessary to dig up the plant, discard the unproductive centre, and replant the outer parts which are still productive.

You may be told that mint is not invasive, but having had the unlovely experience myself many times of having to deal with mint left to run riot through a garden, I can absolutely testify that it is extremely invasive. A lawn with mint growing in it might be fragrant to walk on, but it does not make for a good lawn...

As for your plants making it through winter, if your winters are severe, there is a risk that the small pots might freeze, and that will kill all your plants. Temperatures below 32 degrees F, or zero degrees C night AND day for a week or longer means they will freeze. Clustering the pots together in the warmest, most sheltered spot you have, and surrounding them with insulating material (straw bales or something) might prevent that happening, but it does depend how cold your winters actually get. Alternatively, removing them to a greenhouse over winter if you can will get them through - they are hardy plants, but much more vulnerable through the roots in pots. The plant or cutting you have which has a root but not yet a rhizome, provided you pot it up and it starts growing, will have no more trouble coming through the winter than your other plants, so long as the pot does not freeze.

Not the answer you're looking for? Browse other questions tagged identification propagation mint edible or ask your own question.

6
How often can you produce cuttings from mint?
5
What is this saw tooth leaved plant, and will it flower and attract bees?
8
Identifying types of mints in my garden
3
Plant Identification and Pet/Child Safety
3
Can anybody identify this evergreen Clematis please ?
1
Help I think I may be killing my mint plant
1
Plant Identification: plant from mint seeds
4
Is this wild mint? (identification)