Why are parts of my Acer dying?

I have what I think is an Acer palmatum that has been in a large planter for 2 years now but this year 2 of its branches have turned brown from green and shed all their leaves.

The planter is 64" x 24" and 24" deep at its shallowest point. It sits on top of an old broken concrete patio and is deeper beneath the Acer. It's well sheltered. It gets sun most of the day but will be mainly dappled due to the surrounding foliage. There are 5 other plants of the Alpine variety. The Acer's leaves are variegated green and cream with pink tips. 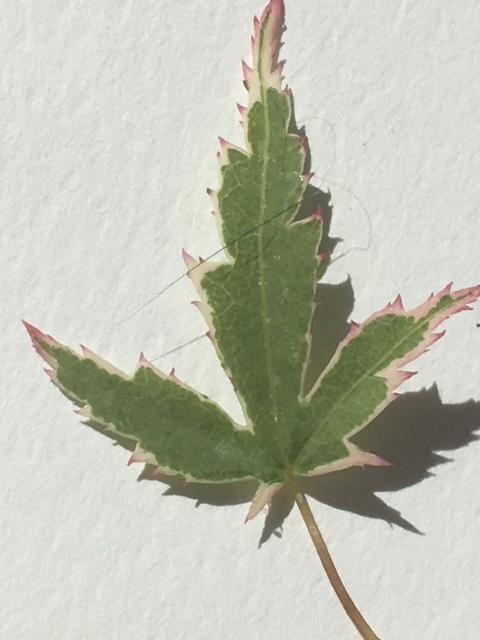 I am in the UK South London. 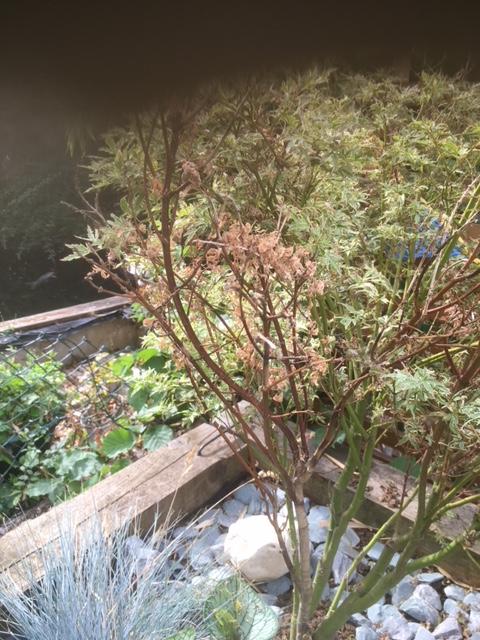 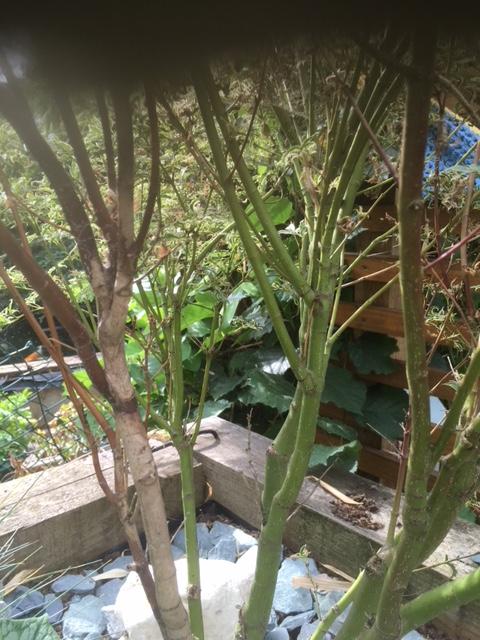 From the looks of the strong, green stems and your confirmation of its leaf coloration, your Acer is not a palmatum variety, but is actually Acer negundo 'Flamingo'. This is a large tree in comparison to palmatum varieties, and grows fairly rapidly; being confined to a container is likely why you have significant dieback, because there's insufficient root room for it. Information here http://www.burncoose.co.uk/site/plants.cfm?pl_id=70 but note that the colours of the leaves shown in the image are exaggerated, a not uncommon trick used by sellers; they are not usually so pink as they look there other than possibly when they first leaf out in spring.

This tree, in the ground, often produces reverted branches, meaning they have plain green leaves - these are cut out as soon as they are noticed, though preferably not between leaf break and midsummer because of the risk of bleeding. It is possible to keep it as a small tree (around 10 feet) by pruning annually, either from end of July onwards or in winter before end of January. If you want to keep it, you need to find a spot in the garden for it and perhaps replace it in your container with an actual Acer palmatum variety, which are generally much slower growing and smaller trees. If you do transplant it, best done in late autumn, especially this year with the drought conditions and heat we're having; remove the dead parts now or when you transplant.

Thanks for the close up of a leaf. Having seen that, your plant is not, as I said earlier, Acer negundo, it is Acer palmatum 'butterfly'. It isn't a small nor particularly slow growing variety, reaching 2.5m after ten years, but because it's a palmatum variety, it may have suffered some dieback in parts. Clearly, though, there is new, strong growth, but this particular variety is a grafted plant - if the leaves are the same as they were last year and growing off that new growth, then it's likely to be the original, grafted plant. If not, then it might be growth off the root stock, and the original grafted section has died back.

We're having a very hot summer with virtually no rain - your Acer, you say, is in sun all day, albeit in a sheltered position. It's possible the dead part was affected by a combination of the intensity of sunlight and drought at some point this year, if this dead area appeared after spring. If the dead area was there prior to leaf break, the extreme and sudden cold in March/April may have affected it, causing dieback.

Remove the dead area by cutting it out at the base, and I do suggest you move it into a large container on its own, or plant it in the ground, as it's growing very strongly. https://www.rhs.org.uk/Plants/62336/Acer-palmatum-Butterfly-(P-v)/Details

Not the answer you're looking for? Browse other questions tagged diagnosis maple or ask your own question.

12
Why is my new Acer tree dying?
2
Why does my Red Acer plant look like it has twigs but no leaves?
4
Acer lost bark around trunk
4
Acer platanoides vs Acer pseudoplatanus
6
Japanese Acer - Why does the new growth coming from the bottom look very different?
2
Is my Acer dying?
2
Are our two baby/young Japanese Acer dead?
1
Why is my Acer drooping?