What is eating my vegetable seedlings?

I recently grew some lettuce and carrots from seed, but within three nights they were completely eaten.

I then used a seed growing tray and then transplanted about 40 out into the garden bed. But these have been gradually dissappearing.

When transplanting the seedlings I covered the bed with transparent plastic and had chicken wire at each end to let air get in. I think it would be impossible for a snail to get in.

This only happens at night time.

I agree with Tea Drinker. You could (and probably do) have a large population of small slugs hiding in your soil as well as larger snails and slugs hiding in the leafy parts of your garden during the day. To combat them without pesticides, you can use a combination of approaches: 1. go out into the garden after dark and collect the little critters, making sure you look in the areas surrounding your veg and flower patches, and discard them (chuck them over your garden fence or dispatch them in a glass of cheap lager); and 2. if available in your area, you can buy nematodes that will infect and kill your slug (but not snail) population (this is the brand available in the UK: http://www.nemaslug.org.uk/) There are other non-toxic methods (there are organic slug and snail pellets available), but I've found these two approaches to be the most effective.

I've also found that coarse sand can also act as a barrier to snails and slugs, particularly in the greenhouse or other moderately-protected areas.

Additionally, I grow all my lettuces in planters and ring the planters with copper tape which, in my experience, is great at keeping snails off tender plants (e.g http://www.organiccatalogue.com/catalog/product_info.php?products_id=1756 .) This time last year, my potted hostas were nearly decimated by slugs, but this year there's not a hole in sight! By the way, I've found that snails and slugs climb right over the copper rings that sit directly on the soil and they ignore sunken beer traps, but maybe I have fussy slugs.

Try some slug pellets (assuming you don't object in principle). That would soon confirm (or otherwise) if it's slugs: you would quickly be seeing dead slugs, if I am right.

I agree with Tea Drinker - your seedlings are almost certainly providing a feast for slugs and/or snails. Apparently, slugs can eat up to forty times their weight daily! As an alternative to taking the steps already mentioned, you could protect your seedlings with a netting grow tunnel (which would also protect them against bird damage and the heat of the sun) - see photo - provided you ensure beforehand that the soil over which you are going to place the tunnel is slug-free. I grow both lettuce and seedlings under one, and it works a treat. 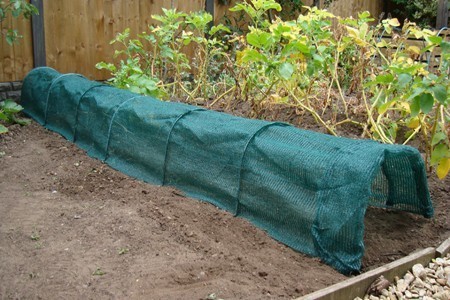 Could it be armyworms or cutworms (small caterpillars)?

For those of you starting seedlings indoors for the fall, or outside in your garden, and are finding half-eaten leaves or seedlings nibbled to the stem, check for armyworms and cutworms. These tiny caterpillars will chew up the young leaves and damage tender plants, limiting their chances of successful growth. They often eat at night and spend the day just beneath the soil near the stem. Check in this area in the morning if you notice plant damage. Some also feed during the day, hiding just beneath the leaves. Pick these off diligently. Another solution is BTK (Bacillus thuringiensis var. kurstaki), common biological spray used for all caterpillars.

Below is what Wikipedia has to say about those two pests:

It is regarded as a pest and can wreak havoc with crops if left to multiply. Its name is derived from its feeding habits. Army worms will eat everything in an area and once the food supply is exhausted the entire "army" will move to the next available food source.

Feeding habits: The armyworm's diet consists mainly of grasses and small grain crops. An infestation is hard to detect as the caterpillars migrate to new feeding areas in the cool of the night. When the caterpillars near maturity, they can lay waste to an entire crop in a few days.

Cutworms are not worms, biologically speaking, but caterpillars; they are moth larvae that hide under litter or soil during the day, coming out in the dark to feed on plants. A larva typically attacks the first part of the plant it encounters, namely the stem, often of a seedling, and consequently cuts it down; hence the name cutworm.

Feeding and hiding: Cutworm larvae vary in their feeding behaviour; some remain with the plant they cut down and feed on it, while others often move on after eating a small amount from a felled seedling; such a wasteful mode of feeding results in disproportionate damage to crops. Cutworms accordingly are serious pests to gardeners in general, but to vegetable and grain farmers in particular.

Species and habits: Cutworms are notorious agricultural and garden pests. They are voracious leaf, bud, and stem feeders and can destroy entire plants. They get their name from their habit of "cutting" off a seedling at ground level by chewing through the stem. Some species are subterranean and eat roots.

Not the answer you're looking for? Browse other questions tagged vegetables pest-control or ask your own question.

18
How do I deal with millipedes eating my vegetable seedlings?
16
Do techniques to repel slugs also work on snails?
15
Can snail pellets be safely used in a vegetable garden? If not, any safer alternatives?