Should I prune this 3 year-old Tamarind tree fork?

I have a 2.5 year old Tamarind in a container. It has what looks like a tree fork. I'm considering cutting the least straight one (it's the outer/right-leaning one on the picture). Even though the straighter trunk is not growing as well and is not as thick, at the moment. Is that the right course of action? What would happen if I left it as is? 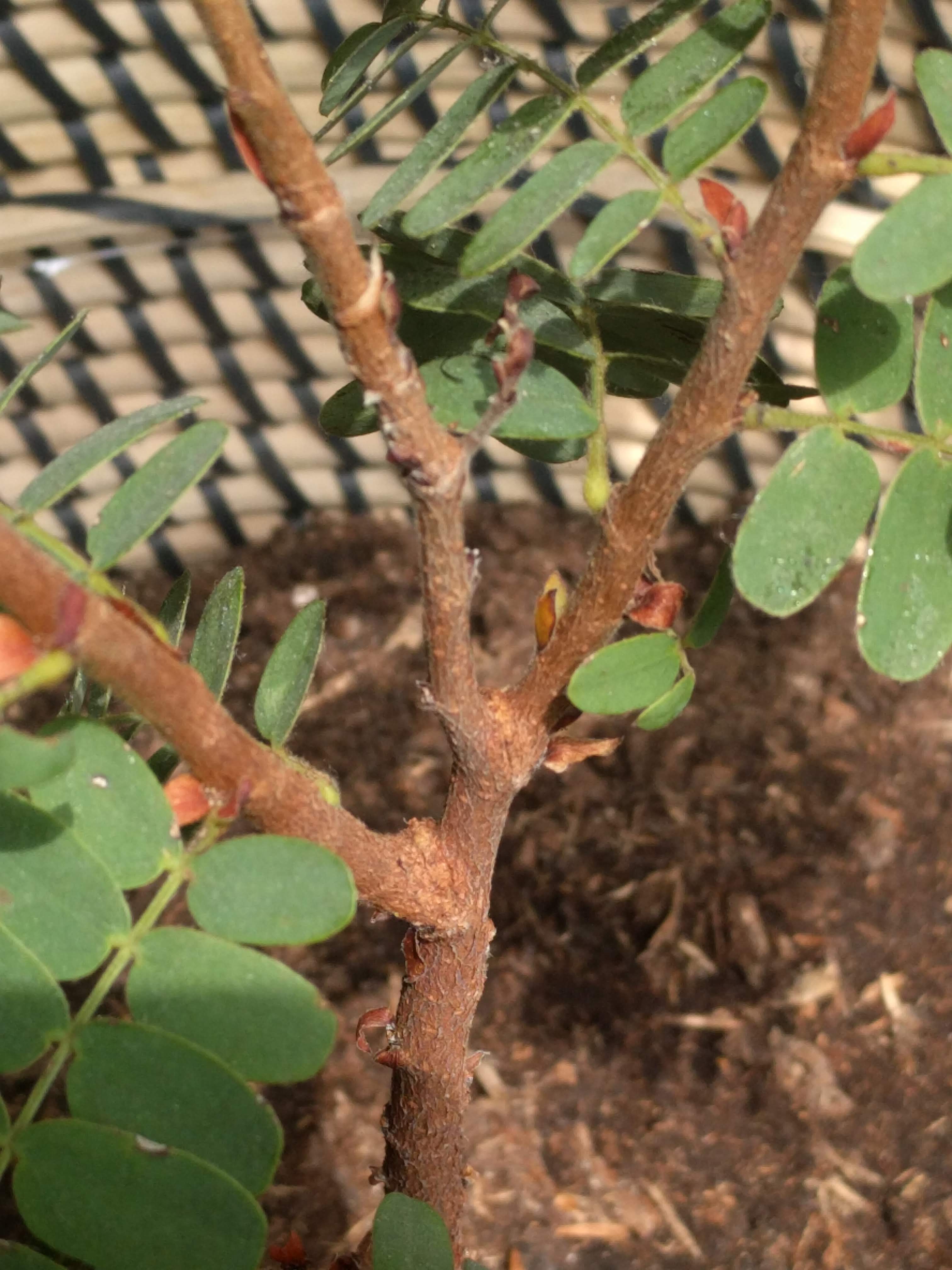 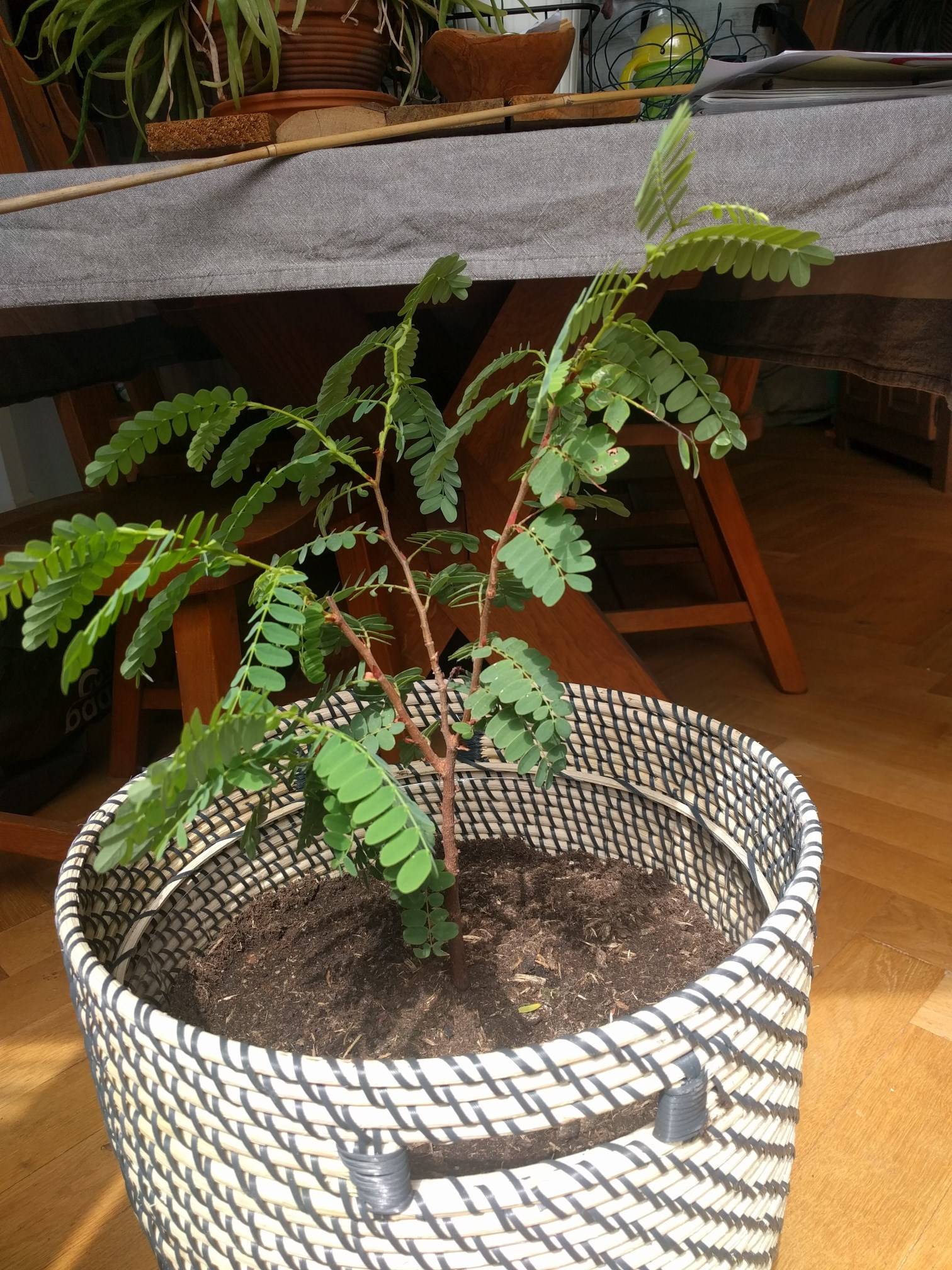 You can prune branches pretty much anytime you wish. You could, in fact, chop all the branches off and cut even lower doing what is called a 'trunk chop'. Two priniciples to keep in mind is that buds (and what can eventually be new branches) will appear only at nodes (those little fat spots on the stems). The uppermost node usually winds up in charge, meaning leaves and new stems will appear from it and it tends to suppress budding/branching from occurring below it (toward the roots). One uses this characteristic to make branches appear where you want them.

The other principle is that after having cut a stem it won't thicken much until the stem growing from it is nearly as thick. This is how we produce tapering stems. If you were to trunk chop your tree now (hypothetically) the trunk from the soil up to the node above which you chopped will not thicken until the new branches are nearly as thick - in other words until it again looks much the same as it does now.

I think your tree is much to thin to do this yet - the trunk should be thicker. If you agree, then let it grow for a few years. All energy and material to build a tree is produced by photosynthesis in the foliage. So, to thicken the trunk you want to let it have as much foliage as it can. The only reason to remove a branch (which reduces leaf area) is because its foliage is shading other foliage, making it less productive.

On the other hand, you may not want to make a bonsai in the style of a normal tree. There is a style called literati with which the trunk is kept long and thin instead of getting thinner with height as a tree normally does. The interest in literati is in the line the trunk makes - maybe being very straight and then abruptly moving this way and that with no tapering in thickness. If this is what you have in mind, you likely would remove two of the existing branches now. Then you would prune the trunk just above a node. Then keep the one bud that appears (after a short time) at that node and rub off any others. You let that grow until ... etc.

So, it is completely up to you to decide what style you want for your tamarind bonsai.

9
What sort of planting layout should I follow to cover a fence with a hedge?
6
Can I allow a pine tree to share root space with a group of birch trees? If not, which should I cut down?
3
How should I deal with my willow tree that has been butchered by the council?
4
Staking a Weeping Willow
7
How important is full sun for a Blue Spruce tree?
4
How should I prune my tamarind?
2
Is it too late to top this cayenne chili plant?
2
Understanding tree rings and estimating the age of this tree
1
Valuing a Bonsai